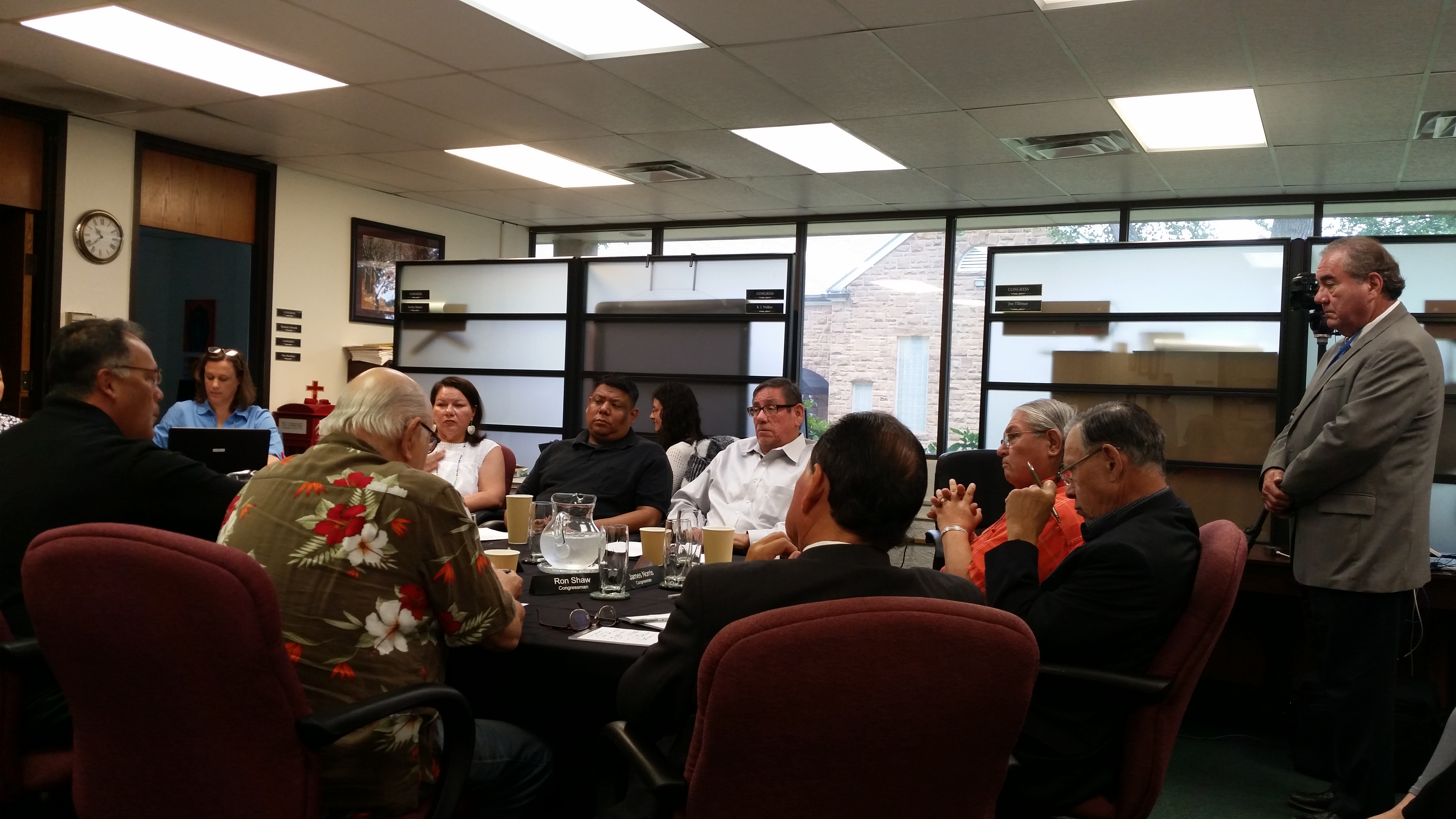 The Aug. 25 Osage Nation Congressional special session concluded with the Congress amending and approving an agreement with the state of Oklahoma to mitigate the natural gas leak at the Pawhuska High School, which delayed the start date for the new school year.

The one-day special session concluded with an approved $110,000 supplemental appropriation bill (ONCA 17-93, Congresswoman Alice Buffalohead) to cover a shortfall for the Nation’s burial assistance fund that will cover the remaining 2017 fiscal year ending Sept. 30. A second resolution was also approved for a limited waiver of sovereign immunity with a pharmaceutical billing services company for the Wah-Zha-Zhi Health Center.

“Since this proclamation was issued, there has been an environmental emergency at Pawhuska High School,” Standing Bear said. “So the Nation can help in this emergency, we are asking Congress to consider adding a third subject to the proclamation: A resolution for an agreement to work with the State of Oklahoma to help mitigate the environmental emergency at Pawhuska High School.”

Students at Pawhuska’s Indian Camp and Elementary schools started class on Aug. 28 and Junior High and High school students started school on Aug. 30. Classes began after the State Fire Marshal’s Office said the schools are safe to occupy, pending results of air monitoring tests at the schools. A contract crew (hired by the Oklahoma Corporation Commission) worked on the gas leak (which is ongoing) and installed a ventilation system at the high school after the agreement was signed.

During session, the Congress discussed the agreement at issue in the resolution (ONCR 17-32, Congresswoman Alice Buffalohead) before ultimately voting to amend it and approve it with a final 7-2 vote before it was sent to Gov. Mary Fallin’s office for signature.

At issue were concerns over liability language, a waiver of sovereign immunity in the agreement and whether the original proposed agreement contained all language agreed to by the Osage Minerals Council. ONCR 17-32 is titled “to support and authorize the execution of an intergovernmental agreement between the Osage Nation and the State of Oklahoma for the Oklahoma Corporation Commission to repair a dangerous natural gas seep at Pawhuska High School and to provide monetary assistance; and to authorize a limited waiver of sovereign immunity.”

Filed with the Congressional office on Aug. 23, ONCR 17-32 comes after the Minerals Council voted to approve the agreement with the state by passing OMC Resolution No. 3-227. Buffalohead told Congress an agreement is needed with the Nation’s approval because the gas leak is within the Nation’s jurisdiction. According to the Osage Constitution Article XV (Natural Resources & Minerals Management), “the oil, gas, coal and/or other minerals within the boundaries of the Osage Reservation are hereby reserved to the Osage Nation pursuant to the Act of June 28, 1906, as amended, and is hereby designated the Osage Minerals Estate.”

During session, Standing Bear told the Congress: “Based on federal regulation, the (Bureau of Indian Affairs) has determined they have no jurisdiction in this matter and defer to the Osage Nation and the Osage Minerals Council with respect to entering into any agreement with the state of Oklahoma.”

ONCR 17-32 passed with two “no” votes from Congress members James Norris and Maria Whitehorn. That day, Congress members RJ Walker and Shannon Edwards were absent and Joe Tillman left session before the vote.

Also that day, the Congress unanimously passed resolution ONCR 17-33 (sponsored by Congressional Speaker Angela Pratt) to authorize a limited waiver of sovereign immunity and consent to jurisdiction in a separate agreement with Pharmacy Providers of Oklahoma (PPOK) to provide pharmaceutical distribution and administrative services at the Wah-Zha-Zhi Health Center.

The agreement in ONCR 17-33 is similar to another agreement the Nation signed with a Kansas City, Mo., company earlier this year to handle the same services at the Pawhuska-based WHC.

“The current pharmacy clearing house for the Wah-Zha-Zhi Health Center has been bought out by another company,” Standing Bear said referring to PPOK. “As was required with the previous one, this company requires a new contract and therefore, a limited waiver of sovereign immunity. To ensure a seamless transition and to avoid any disruption of pharmacy services for our people, we ask Congress to consider (ONCR 17-33) for a limited waiver of sovereign immunity.”