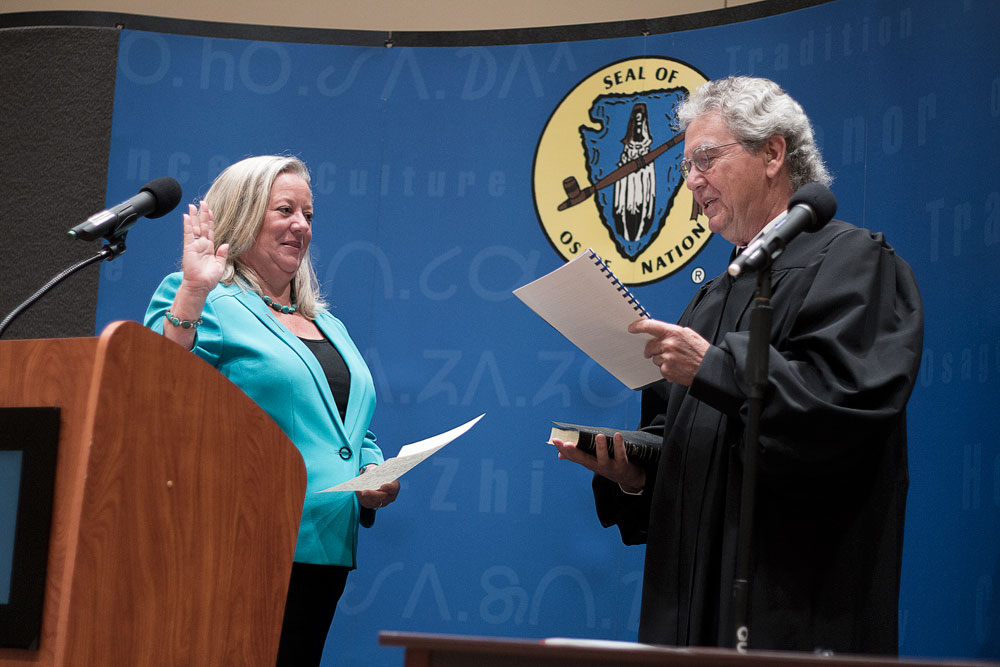 The Inauguration Day for Osage Nation elected officials will now be held on Saturdays instead of Wednesdays, thanks to a congressional amendment to the election code.

During the 2017 Tzi-Zho Session, the Fifth ON Congress voted to pass a revised election code (ONCA 17-107 sponsored by Congresswoman Alice Goodfox, formerly Buffalohead) governing the conduct of elections for officials serving in the Nation’s three branches. During the amendment process, officials voted to change the inauguration date from the first Wednesday in the month following an election to “the second Saturday of the first month after their election.”

Congresswoman Shannon Edwards, who proposed the amendment, said she wanted to prevent an inauguration from taking place on a weekday, noting more guests and elected officials’ family members would likely be able to attend an inauguration if it wasn’t held on a weekday. Edwards recalled the 2006 inauguration was held on a Saturday and since that time, Congress passed an earlier version of the election code specifying the inauguration to be held on the first Wednesday following the election – that led to “unintended consequences” with one July 4 inauguration since then.

In 2012, the Third ON Congress took their oaths on July 4 in the Congressional Chambers building on the government campus in Pawhuska.

Afterward, the Congress passed another revised election code specifying the inauguration is to take place on July 3 in case the Wednesday falls on July 4 again. Edwards said she believes the inauguration day change to Saturday is better because “people have to work” and there’s no time for other inauguration activities, such as a dance, if it takes place during the day.

Congresswoman Maria Whitehorn said she supports the day change because “I believe people will have an opportunity to plan without taking work time off.”

Congressman John Maker also supported the day change noting it’s an opportunity to have an event where “we’re actually feeding our people.”

Congresswoman Alice Goodfox, who is the Second Speaker, cautioned that moving the date may increase expenses for inauguration day activities, stating “if you move the date, there will be a cost.” She also noted the Congress will still have the responsibility to go into a special session after inauguration, which is typically held to elect Congressional officers for the Speaker and Second Speaker positions.

The revised election code ONCA 17-107 passed with seven “yes” votes from Supernaw, Shaw, Goodfox, Edwards, Hamilton, Pratt, Walker and one “no” vote from Maker. Whitehorn abstained from voting stating she did not read through all of the revised election code, which is more than 40 pages and did not feel comfortable voting at the time.

With the date change in effect, the 2018 Inauguration Day will take place on July 14. Activities and venue details for the day have yet to be worked on.