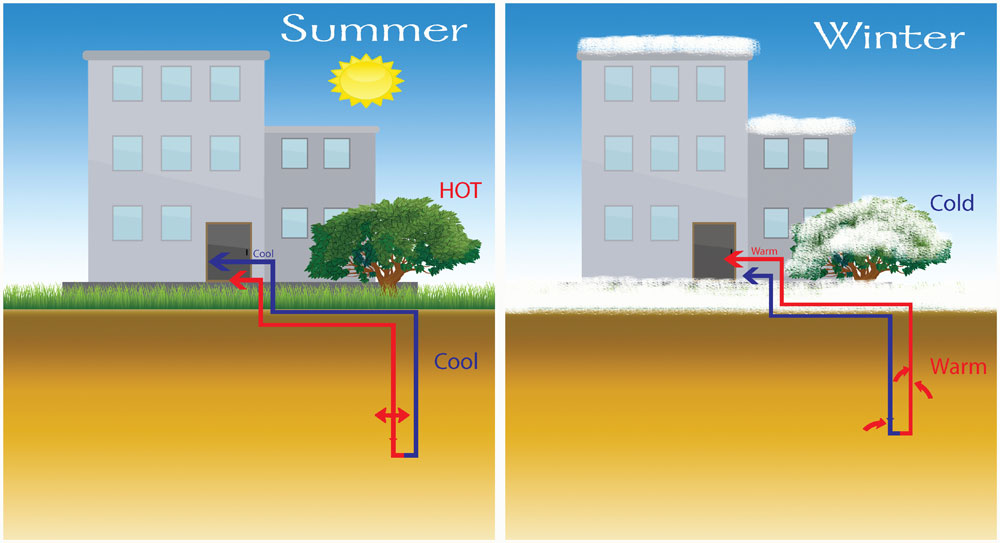 Those raised in the Osage are as familiar with the sights and sounds of oil and gas production as they are with the sights and sounds of wind and rain. We fall asleep hearing the sounds of pump-jacks – the metronome of the prairie, as ubiquitous as cicadae. Although the term “geothermal production wells” is becoming more common in the Osage, many of us know little about them. I reviewed available information and gained some understanding of the topic.

The reason geothermal wells work is because the temperature under the earth’s crust remains constant while the above ground ambient temperature changes seasonally. During August in Osage County, the temperature can be a sweltering 100 degrees or more, and drop to 32 degrees during the winter months. In the meantime, the underground temperature remains at a constant temperature of 55 degrees at some depths. Underground, temperature increase with increased depth.

By placing loop(s) of pipe containing fluid into the ground, heat can be transferred to and from a building to the cooler temperature underground. The warmer temperature from above will be dissipated by contact with the relative cooler temperatures below and returned above ground cooler than the ambient air within the building. During the winter the reverse transfer of temperature works as well, in reverse.

According to the California Department of Conservation, “The methods and equipment used to drill geothermal wells … are very similar to those used to drill oil and gas wells. Conventional rotary drilling rigs and drilling equipment are used and drilling fluid – also called drilling mud – is circulated through the well to bring the cuttings back to the surface and to cool the well.”

In describing well design, the California Department of Conservation states that, “After a well is drilled ... steel pipe, called casing, is cemented in place by pumping cement into the annulus [the space between the casing and the rock formation]. The casing and cement prevent fluids in different zones from mixing with each other or with the produced fluids. It is important to cement all of the annular space behind the casing. Cement prevents the casing from expanding or buckling when heated and helps prevent corrosion. If the casing is cemented across the production zone, small holes are punched through the casing with a special gun-perforating device. The casing usually runs from just above the producing formation to the surface ...” I hope this discussion helps folks understand some of the basics of geothermal well construction, design and dynamics.

I know very little concerning the gas leak around the geothermal wells heating and cooling the Pawhuska High School. I do know that they did not cement in the casing. Grout is a relatively porous and brittle material, and lacks the bonding properties to withstand as much pressure and shifting surges as cement. This was used instead of cement. Drilling logs reported differing total depths, thus eroding confidence in their drilling logs. The Osage Minerals Council was not consulted prior to or during the construction of these wells, only after gas began to leak. OMC officials have been since notified by the Oklahoma Water Resources Boards that their inclusion will be sought in future planning.