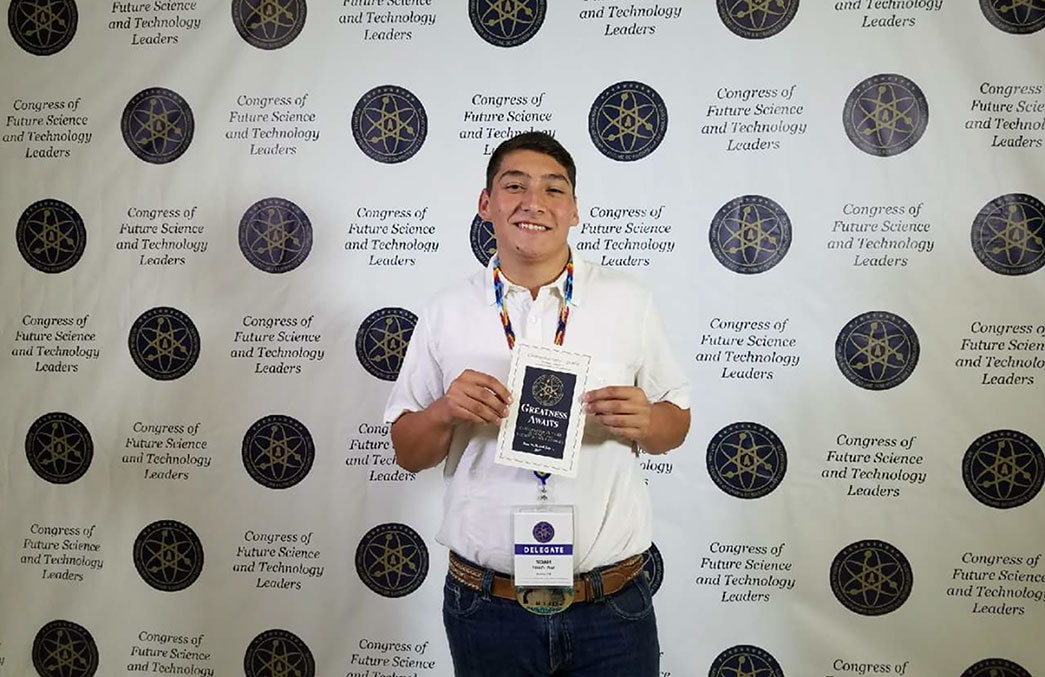 Noah Shadlow and his father, William Shadlow, traveled to Boston, Mass., in July where Noah attended the Congress of Future Science and Technology Leaders as an Oklahoma delegate.

Shadlow, a 17-year-old senior at Hominy High School, was nominated by Dr. John C. Mather, winner of the Nobel Prize in Physics and the Science Director of the National Academy of Future Scientists and Technologists. Noah said the trip was inspiring, to say the least.

“It was probably one of the funnest things I’ve ever done. It was me and my dad and we got to run around Boston,” he said. “The Congress met for eight hours a day and we went there for four to five hours a day. While I was there the people presenting were so inspiring and so cool.”

During the three-day Congress, students heard Nobel Laureates and National Medal of Science recipients talk about leading scientific research. They were given advice from deans of the world’s top tech universities and saw works by fellow teen science prodigies, according to a prepared release.

Shadlow said while there were many science and technology presentations, including a full-sized robot, it was a presentation of a man’s story of coming to America from India that was most inspiring to him. This man didn’t have much money but he went to school and developed a water purification tablet and now he is a multi-millionaire.

Upon returning from Boston, Shadlow was a part of the first class to win the Osage Nation’s Health Career Scholarship.

“I actually did a medical internship this summer, so I’m probably interested in medical science or Indian law,” he said. “My internship was at the Wah-Zha-Zhi Health Center.

“Just getting to see how the whole clinic worked because I didn’t know how it worked. They sent me to every department, from the front desk to optometry, it was keen.”

He said he plans to attend Fort Lewis College in Durango, Colo., after he graduates and wants to enter the medical science field.

“I am excited for him,” said his mom, LaDonna Shadlow. “I know he will do lots of good. We could not have sent him [to Boston] without the help of the Nation and Foundation. We are really thankful for that!”

Shadlow is the vice president of the Wah-Zha-Zhi Youth Council, where he was instrumental in sending a delegation to the Standing Rock Reservation in the fight against the Dakota Access Pipeline in 2016. He plays the tuba in the Hominy High School Band and he attends Osage Language classes. He is of the Hominy District and is the son of William and LaDonna Shadlow.