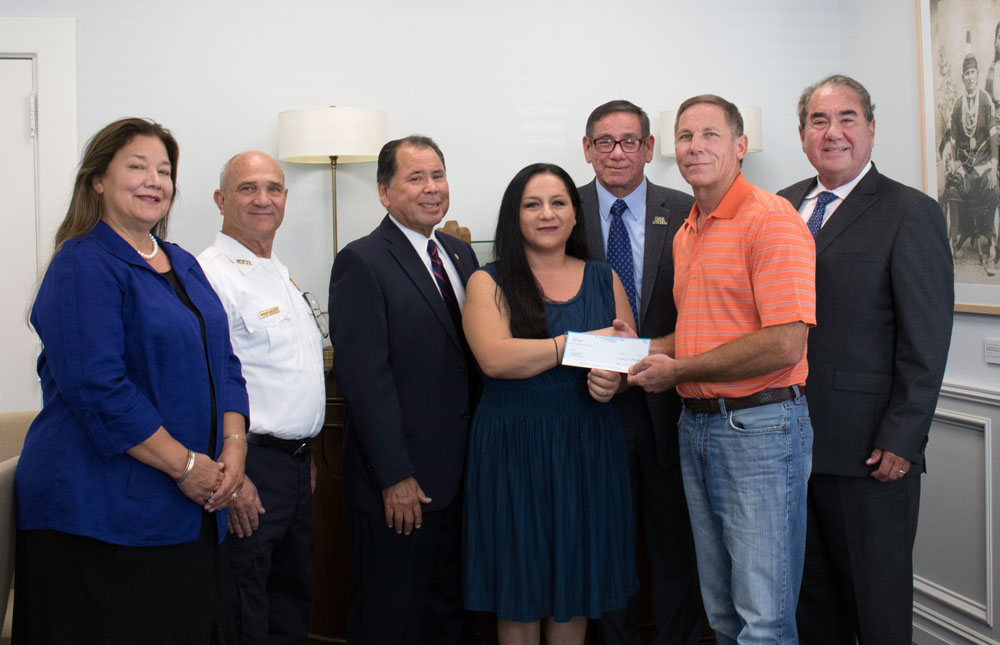 The Hominy Fire Department is purchasing a new fire truck thanks to a $30,000 grant from the Osage Nation.

During the 2017 Tzi-Zho Session, the Fifth ON Congress unanimously approved a bill (ONCA 17-95 sponsored by Congressman John Maker) authorizing the $30,000 to be paid from tribal funds in the general treasury. On Oct. 13, Hominy Fire Department officials accepted the $30,000 check from Executive and Legislative branch officials during a visit to the ON government campus in Pawhuska.

According to the bill, “to carry out the purpose of purchasing a fire truck for the Hominy area, including the Hominy Indian Village, the Osage Nation Congress authorizes the Principal Chief to enter into an intergovernmental agreement for the purchase of a fire truck” with the city.

In a letter to the Nation, Hominy fire officials said the city is a recipient of a $50,000 federal USDA grant for purchasing a fire truck, and requested $30,000 from the Nation to go toward purchasing a gently used 2005 International Pumper. The city is also contributing $62,000 for the truck, which costs $142,000 in total. The city’s current 1981 fire truck is in working order, but only seats two people while the newer one can seat a firefighting crew of five, Maker said.

Maker said he spoke with city fire officials after a fire destroyed a historic house in the Hominy village last year and the need for an upgraded fire truck came up in addition to other issues such as no adequate fire hydrants nearby. “They did inform me the fire truck that Hominy has now wouldn’t hold enough water to put out a two-story (house fire of that size) … This is much needed and it is also a health, hazard issue and safety, this is a much-needed thing for the Osage Nation, not just Hominy.”

According to a Congressional fiscal analysis of the bill, “currently the City of Hominy service area includes 625 square miles. At last request, the Membership Department was able to identify 548 Osages currently residing in the zip code corresponding to Hominy (as of April 2017).”

During a Congressional Government Operations Committee meeting discussing the bill, Congresswoman Alice Goodfox, who also lives in Hominy, said she also spoke with city fire officials and was told “it would be a huge relief to know that they have (a fire truck) that’s in great condition and one that’s just in working order, so I’ll be supporting this legislation.”