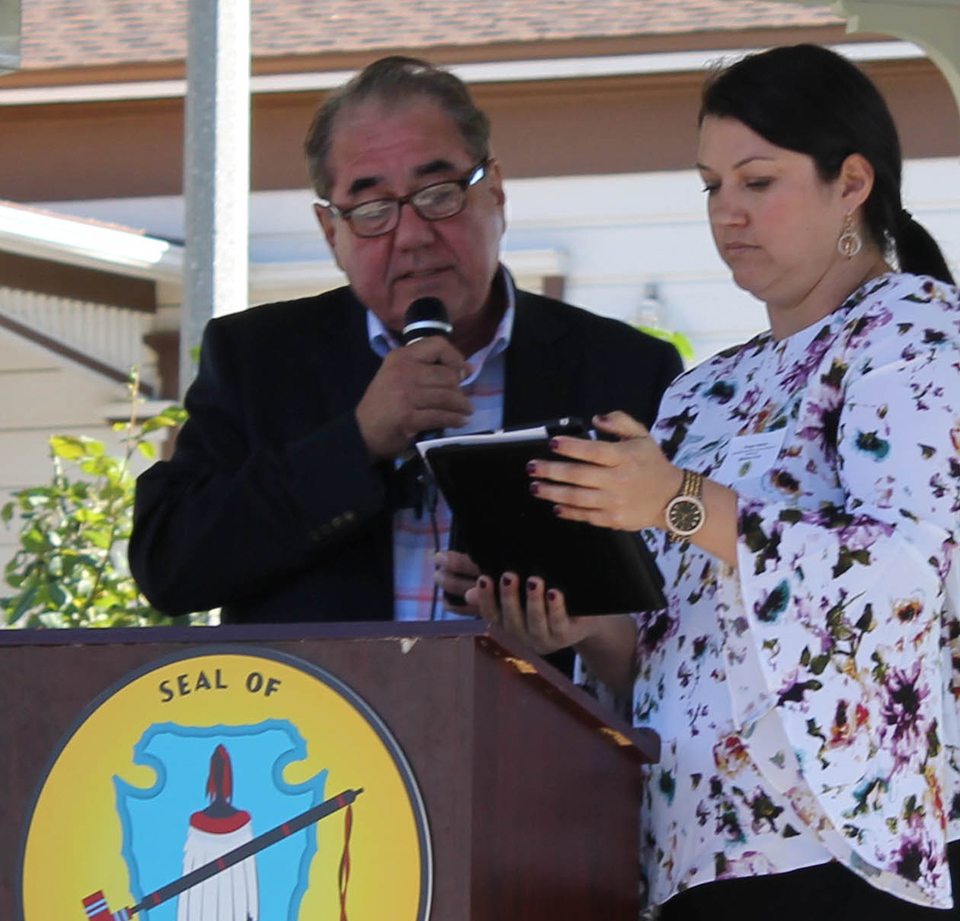 CARLSBAD, Calif. – West Coast Osage constituents enjoyed a clear sunny Saturday as they heard presentations from Osage Nation officials in a city park just one block away from the Pacific Ocean.

The United Osages of Southern California hosted its 2017 fall gathering on Nov. 4 in Magee Park with Heritage Hall in the background, which served as the UOSC gathering venue in previous years. The hall has outgrown the UOSC participation turnout in recent years, therefore the gathering was held outside for the 100-plus attendees who came to the event.

ON officials including Principal Chief Geoffrey Standing Bear and Fifth ON Congress members traveled to the northern San Diego County community and delivered remarks touching on current government affairs and updates for the constituents and their families who live in California or nearby western states.

Standing Bear referred to the Nation’s website www.osagenation-nsn.gov and told attendees to check the website for updates regarding the Nation, including new information and forms for the Health Benefits program. He also noted there is a digital booklet with an update on the Nation’s 25-year Vision and Strategic Plan that was first developed in 2007.

“We’ve taken that as a guide in trying to accomplish these and I thought it would be a really good idea to get a measurement of where we are, so I asked our Strategic Planning Department to do that and they went and had an outside auditing firm help them put together this snapshot,” Standing Bear said. To view the update on the 2007 strategic plan, visit: www.osagenation-nsn.gov/news-events/news/25-year-strategic-plan-snapshot

Standing Bear said he recently visited the Tulsa Osage Casino Hotel that is under construction and noted about half of the Nation’s gaming income comes from the current Tulsa Osage Casino that is along North 36th Street. “This is a new $160 million casino and they’re scheduled to open in August of next year, it’s very impressive, very nice and it’s going to take us to a new level. It’s over one-third more gaming space and it has a hotel with it and this is just phase one … it’s built for expansion as the market will demand.”

Standing Bear touched on other Executive Branch business including the new Osage language application now available for free download to Apple and Android devices. Standing Bear noted it’s important to “keep our funding going through the Language Department” for the language app and other cultural initiatives including the Immersion School program. Executive Branch Assistant Melissa Cole also attended the gathering and helped people download the app onto their cell phones and tablets in addition to answering questions about government services.

“It really does take all of us to work together,” Pratt said of government officials working to set the budgets. “I think we keep trying to get better and better because it takes all of us.”

Congresswoman Alice Goodfox said construction continues in the Hominy Village for a new arbor and community building, which are expected to be completed by the June 2018 In-Lon-Schka dances. “More and more Osages are coming back for our ceremonial dances and we all love having you back and we invite you all to come home and to be a part of everything we’ve got going on in June,” she said.

Goodfox mentioned she is hearing good feedback on the Wah-Zha-Zhi Health Center, which is managed by the Nation through a multi-year compact with Indian Health Services. “Under this administration, they made that happen. We compacted and we have a service now that people are really proud about, they are really excited they can go to Pawhuska and receive good medical care … I’d like to say thank you to the Executive Branch and Congress for making that happen.”

Congresswoman Shannon Edwards, an attorney by trade, said she recently visited three California tribes and discussed government and judicial operations with tribal officials, as well as the subject of democracy in Indian Country. “We started discussing their government and I assumed that a lot of Indian people have democracies and in fact, that’s not true … I said ‘so your council has a lot of influence and of course your chairman?’ and they said ‘no, the chairman is our tribe, we don’t have the ability to have a voice,’” Edwards said she was told.

“Well I’m very proud that our Osage Nation is a three-part government and what that means, along with being a democracy, is that each and every one of us has a voice and we have a vote and we have an opinion and we have the ability to have our opinions heard. So, I want to stress very strongly that in the future and now, please educate yourselves about what goes on in our tribe and use your voice.”

Congresswoman Maria Whitehorn said the Nation needs to continue working on economic development to diversify tribal income. “We’re trying in different ways to boost our economic development, it takes money to do that and it takes faith and good people sitting on your boards to be able to support them in what they do,” Whitehorn said. “I ask that you support our decisions about trying to diversify our income … To do these wonderful benefits for our tribal members (i.e. scholarships, health benefits program, etc.), it’s just going to take dollars and perseverance and it’s going to take everybody’s watchful eye on what we do with our Osage dollars.”

Currently, the Osage Constitution may only be amended by the Congress, which refers questions for a vote by the Osage people if the Congressional resolution calling for the question is approved by five-sixths of the Congress or by a petition process initiated by qualified Osage voters.

Congressman John Maker shared thoughts on culture and history, noting he thought of earlier Osage generations who left Oklahoma for other states including California as he flew west. “It had to be a very hard decision (to leave) … I can see when I talk to all you folks, you still have that thing inside us that make us Osage people … I can tell you have a passion for your people back home and what goes on back there and I think most of you told me you’re pretty happy with the way your Osage government has been doing,” he said. “It’s not a perfect world, it’s not a perfect world up in Washington, but we’re always doing the best we can to do what’s right for all the Osage people.”

“The (Osage) culture is what we are, the language, the culture, it goes together, it’s intertwined,” Maker said and recalled his first visit to a UOSC gathering over 10 years ago as an Osage Language Department instructor who taught a beginner’s language course. “And when you teach it, you have to teach it and combine the Osage language and culture. In the future, we don’t know what’s going to happen, but I do know this: Someday if the casinos are gone, what’s going to be left is going to be us, you and our culture because when we came down to Oklahoma, we didn’t have anything but the shirts on our backs and a couple bags of corn and maybe someday that might be what we have left again, but we will have our culture … we can’t be Osages if we don’t have that.

Congressman Otto Hamilton said his family has earlier UOSC ties noting his grandfather, Berbon Murphy, and his brother, Roscoe Murphy, were part of the organization in the 1960s. “My mother and father, who are both Osage, met out here in California, so I was born down the road in Irvine and I always feel a strong connection (with California),” he said.

Hamilton said he has also visited California tribes in recent times for powwows and noted he also speaks with officials about how the tribes operate. “We’re trying to get to that place too back home… (also) I have to tell you (attendees) ‘good job,’ I haven’t been to (a UOSC gathering) so well attended and so well organized, it feels like a family reunion coming out here and meeting so many people.”

Hamilton also used his speaking time to acknowledge and honor former UOSC Chairman Galen Clavier who was celebrating his 88th birthday at the event. Clavier’s son, Greg Clavier, is the current UOSC Chairman who organized the day’s gathering with help from other family members. Hamilton called Galen Clavier to stand and he presented a Pendleton blanket as an honoring gift.

Greg Clavier said the next UOSC gathering event will be April 21 at the Carlsbad Senior Center, which will allow for a candidates forum for those seeking office in the 2018 Osage elections. Next year, six seats on the ON Congress, both ON Executive Branch offices and all eight seats on the Osage Minerals Council will be up for election.