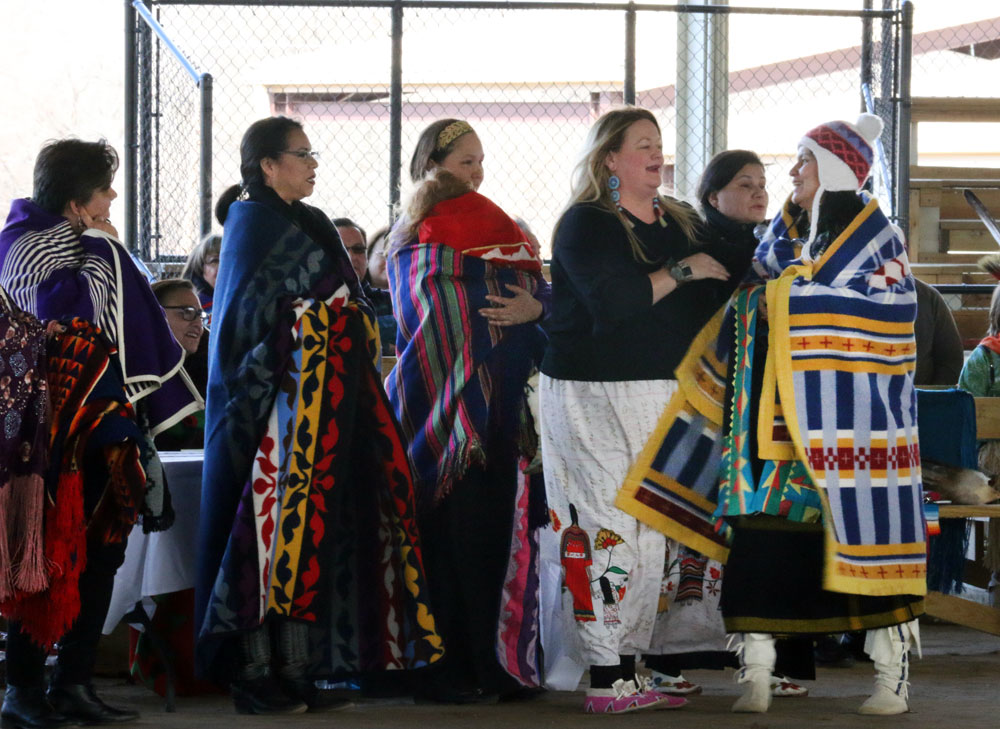 The weekend began with a Friday afternoon tea to celebrate Osage women and girls. They came in their finest, they came with hats on, and were served tea, tea sandwiches, scones, cookies, chocolate covered strawberries and other various desserts.

Dr. Moira RedCorn, the daughter of the late Osage author Charles Red Corn and one of the organizers, welcomed all the ladies for attending and offered the microphone to anyone who wished to share a memory or a story of a strong woman in their lives.

One by one, young and old, women began to tell stories of great-grandmothers, grandmothers, head cooks, Osage artisans, Osage leaders, mothers, aunts and sisters. Principal Chief Geoffrey Standing Bear stood up and told a story about his grandmother.

The tea, held on Feb. 2 in the First Baptist Church hall in Pawhuska, was the beginning of a weekend planned to host the Wak’on Owatsi, which translates to “Women’s Dance,” a social dance to honor Osage women and girls. The dance was held close to the one-year anniversary of the death of 26-year-old Blake Sisk, an aspiring model and actress from the Hominy District. Her early death, in part, is what inspired RedCorn and Dr. Robert Warrior to form a committee to plan the Wak’on Owatsi.

Veronica Pipestem, a member of the Wak’on Owatsi committee, said that losses in Native communities can affect generations – it can cause a disconnect from one’s Osage culture if a matriarch is lost or even a young woman. Jacque Butler, who recently lost her younger sister Mary Grayce Bighorse, said that a woman’s place in Osage society is very important and that the loss of her sister, along with her Osage traditional knowledge, was a big loss to her family. Katelynn Pipestem, who currently attends Oklahoma State University, said that one of her studies is suicide prevention and that Native communities, and Native women, need to be educated on the effects of historical trauma. She said that Osage women and the community can be a life support for many of those suffering from depression or being disconnected from their Native community.

The committee hosted a noon dinner on Saturday, Feb. 3, at Wakon Iron Hall in the Pawhuska Indian Village. Traditional Osage dinners are usually prepared by women, but in this case, the dinner was prepared by Osage men.

After the dinner, Dr. Moira RedCorn thanked all the men who helped and gave them all a gift and then presented a gift to Rock Pipestem. Pipestem made the drum that was used for the Wak’on Owatsi. He also composed a song that will belong to that drum for the dance in years to come.

RedCorn invited all the attendees, which were approximately 200, to take any leftover cloth napkins with the Wak’on Owatsi logo on them. “We just wanted to be able to give everybody something,” she said.

Osage Casinos, the Osage Nation Foundation, the Million Dollar Inn, each gave sponsorships for the tea, noon dinner and meal. Donations from members of the community were also given.

The dance took place following the noon dinner under the Pawhuska Indian Village dance arbor. It began at 2 p.m. with Osage Language Instructor, Alaina Maker, praying in Osage before the dance began. The temperature was in the low to mid-50’s, prompting all the women to wear their Pendleton and ribbonwork blankets. More than 20 dancers dressed in their traditional Osage clothes while more than 50 danced in blankets and shawls.

The dance committee brought heaters for the attendees and between songs dancers would stand under the heaters to keep warm. There was also a refreshments table for attendees where sandwiches, scones, cookies and cakes were served, along with hot chocolate, hot tea, water and coffee. The dance ended at 5 p.m. with a prayer in the Osage language by Pipestem.

Director for the Nation’s Family Violence Prevention department, Olivia “Libbi” Gray, thanked RedCorn for the event on the dance’s Facebook page: “Thank you for this Moira RedCorn. This is going to be a beautiful day, even if it’s cold, the intention behind this dance is what will make the day beautiful. Doing something like this to celebrate our women and girls, to bring confidence and strength to those of us who may be struggling with that is really needed. Creating a safe and positive space for women to celebrate one another is a wonderful thing that is not often thought of.”

Osage Hominy resident and retiree, Jewell Purcell, posted on the page about the tea: “Certainly enjoyed the evening last night. Great food, fellowship, uplifting words and lots of love for Osage Women. The Ladies with the hats were very special. It was a very classy event. Thank you to everyone putting it together. Looking forward to the next one.”

Washington-based Osage writer Ruby Hansen Murray posted on her personal Facebook page about the tea and dance: “I came home for Wak’on Owatsi, women’s dance, honoring the strength of Osage women and offered a workshop related to Gina Gray’s art. This is a time of loss in the Osage, the one-year anniversary of a young woman’s early death, as well as early deaths from illness of beloved Osage elders, artists. The workshop was tender. The tea held the day before the dance had the emotional depth that grief opens and the tenderness that hope brings.”