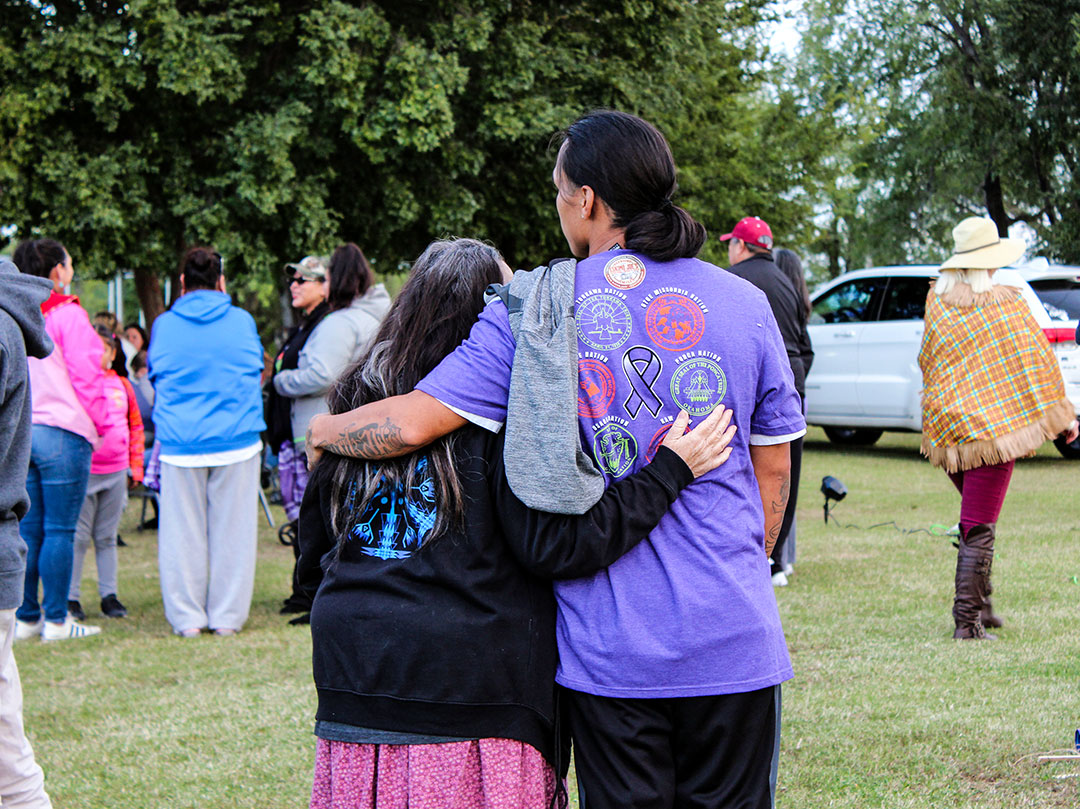 TONKAWA, Okla. — The domestic violence prevention coordinators for six Oklahoma tribes are banking on slime and Skittles to help get their message across.

Previous editions relied on speeches from elected officials and balloon releases to get the point across. This year, mixed in with the brochures and cards listing out victim resources were games, candy, glow sticks and yes, slime, in an effort to get a message through to younger generations that love should not hurt.

“We wanted to incorporate the children this year and try something different,” Osage Nation Family Violence Prevention advocate Alexis Sutton said. “We wanted to start with the youth. I believe if you instill those values early on about how violence is bad with children, it will carry on with them later in life. I fully believe this will help prevent future incidents.”

As dusk settled in across north central Oklahoma, a small drum group played an honor song in remembrance of domestic violence victims and attendees, many clad in purple, lapped the powwow arena.

Previously held in Ponca City, the event is co-hosted annually by the domestic violence prevention programs at the Osage Nation, Otoe-Missouria Tribe, Pawnee Nation, Ponca Tribe, Kaw Nation and the Tonkawa Tribe. Given the geographic proximity of the tribes, the six programs often share resources and have a working group to facilitate collaboration.

Ashley Hein with the Kaw Nation’s Domestic Violence Program said the event will move around to different communities within the six tribes’ jurisdictional areas in an effort to get more participation and bring additional attention to domestic violence.

“We thought it would only be fair to rotate from each tribe to each tribe,” she said. “Osage and Pawnee (nations) won’t have to drive quite as far every year versus when it was always in Ponca City. And this way, it will reach out to more communities.”

For the coordinators of the Six Nations Walk, the event and statistics carry additional weight.

Janett Reyna, one of the coordinators of the first Six Nations Walk in 2012, was stabbed to death in August 2013 by her boyfriend, Luis Octavio Frias, in front of two of the couple’s three children. A former police officer, Reyna was the Ponca Tribe’s domestic violence coordinator and had a protective order out against Frias at the time of her death.

More than five years later, a first-degree murder warrant is still out for Frias’ arrest and bond is set at $5 million. He stands about 5 feet, 11 inches and weighs around 200 pounds. Anyone with information on his whereabouts is asked to call the Oklahoma State Bureau of Investigation at 1-800-522-8017.

The incident took place just days after Reyna had taken out a protective order, the time period identified by the event’s keynote speaker, former victim’s advocate and domestic violence survivor Pam Moore, as the most perilous for a person trying to escape an abusive partner.

“It’s a dangerous situation,” she said. “No one gets out by themselves. It takes help. That’s why we need advocates and why we need these tribal programs.”

The walk comes as Indian Country, as well as the rest of the United States, waits to see if or when Congress will officially renew the Violence Against Women Act.

Under the terms of VAWA’s 2013 reauthorization, tribes may exercise special criminal jurisdiction over non-Natives who violate a protective order or commit an act of domestic or dating violence against a tribal citizen within the tribe’s jurisdictional area.

The expanded tribal provisions do not extend to crimes committed by a stranger, child abuse cases that do not involve a violated protective order, offenses committed on non-tribal land or to potentially related crimes outside VAWA’s scope, such as robbery, identity theft, drug possession or child abuse.

So far, 18 tribes nationally have updated their legal codes to accommodate the special criminal jurisdiction language in the 2013 edition.

To date, only one reauthorization bill has been filed this year. Authored by Rep. Sheila Jackson Lee (D-Texas), the proposed 2018 version has 154 co-sponsors. As currently worded, the measure would maintain the expanded tribal provisions. It would also provide even more federal funding for rape crisis centers and allow for law enforcement officers to remove weapons from people who are the subject of a protective order or are convicted of domestic abuse or stalking.