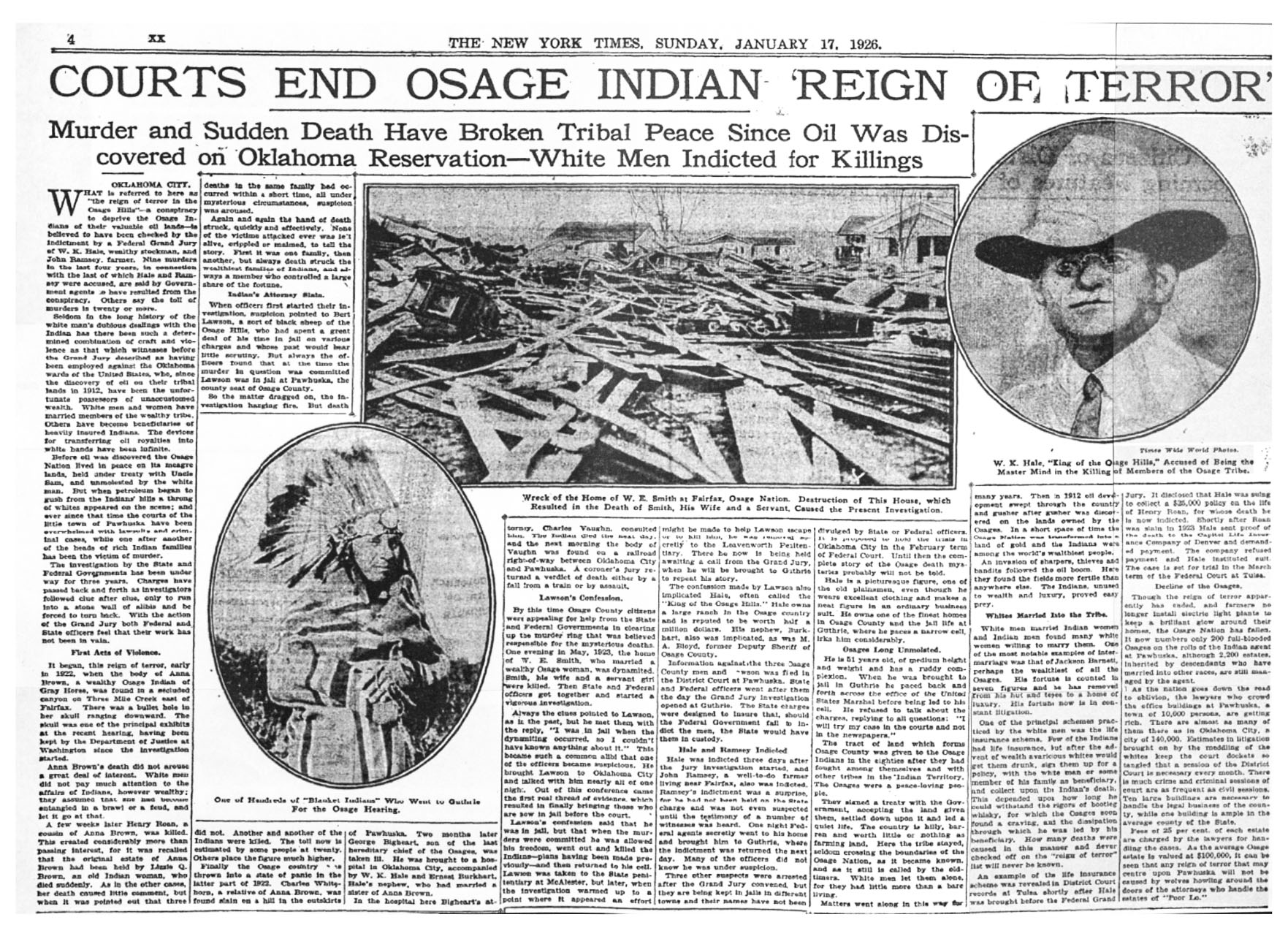 Unease as Hollywood tackles the Osage Reign of Terror

Martin Scorsese and Leonardo DiCaprio have officially signed on to direct and star in the film adaption of David Grann’s bestselling novel, “Killers of the Flower Moon: The Osage Murders and the Birth of the FBI.”

However, many Osage question whether the film will do justice to the Osage story. Oscar-winning screenwriter Eric Roth is reportedly earning seven figures to write the script. The book includes a lot of sensitive and graphic material detailing the systematic murders of many Osages during the 1920s oil boom on the reservation that made the Osage the wealthiest people per capita in the world.

“If you’re a fan of filmmaking and you’ve seen a lot of Scorsese’s films, you know that he handles a lot of violent material in his filmography,” said former Osage Nation Principal Chief Jim Gray. “It’s just his thing.

“There’s no sense of trying to whitewash or minimize the amount of violence that took place during the reign of terror. From a pure filmmaker’s standpoint, I have no doubt we’re going to get slow motion pictures of Osages getting their heads blown off.”

Gray is a descendant of Henry Roan, an Osage who was killed for his wealth and whose murder is depicted in the book.

“You know, I just can’t imagine how our people are going to react to that,” he said. “You know these aren’t fictitious people to Osages. These are real individuals, and they have descendants that are alive today, and I don’t know if the tribe is ready for this.

Gray said the murder of Roan is a very personal story for him and his family. He said he is hoping that the filmmakers consult with the Osage Nation to tell the story not only of the murders but also of the Osages’ legacy, not just that of the FBI.

“There’s going to be a lot of excitement in the air, but when that’s all over with and the lights are down and everyone’s made their money, the Osages are still going to be sitting there,” he said. “What’s the narrative the public is going to have about our people, about our tribe, about our story, about our perspective? That remains to be seen.”

Killers of the Flower Moon

In part, Grann’s book recounts the life of Tom White, a Texas Ranger who became an FBI agent. It explores his relationship of White and that of J. Edgar Hoover. The book details White’s police work on the Osage reservation and his subsequent career. Whether DiCaprio will portray White or Hoover is not yet known.

According to news reports, the film is to begin production next summer. Executives of Imperative Entertainment, which acquired the rights to the book in 2016, have been in touch with the Osage Nation to scout locations in the upcoming months.

Chad Renfro said the company has contacted him since executives visited Pawhuska in January. Principal Chief Geoffrey Standing Bear appointed Renfro and Addie Roanhorse as Nation ambassadors for the project

Renfro said that when the script is closer to completion the company will seek input on elements such as language, style of dress and other aspects of the film native to Osages.

He said that decisions on casting and locations await finalizing the script and that he is compiling an artists’ database of Osages interested in being part of the film.

Telling our own story

Reclaiming Native Truth is a $3.3 million project that addresses false narratives, erasure and stereotypes about Native Americans. Its data-driven research stresses the importance of having Natives tell their own stories.

According to the project’s website, it has been able to explore “unprecedented areas of research and reveal a new understanding of public perceptions and dominant narratives that impact Native peoples within American society.” According to its research, representation of Native people in entertainment and media is less than 0.4 percent.

“We can’t expect Martin Scorsese to tell our story for us,” said Osage artist and activist Ryan RedCorn. “That’s not his job, that will never be his intent, that’s not what he’s been hired to do.

“The way the story is formatted in the book, it makes Osages the victims, and it doesn’t land very hard on survivorship or agency of Osage characters. If that remains the same when it’s translated to the movie, it’s going to be highly problematic for an authentic narrative of Osages to exist within the mind of the general public.

“What the book does, and the potential of the movie could do, is reinforce negative outcomes. There’s an expectation that Osages will, would and should be murdered. That’s very scary.

“But, if an entire country or world is given this idea —which isn’t refuted in the book — that Osages aren’t deserving of being the benefactor of their good choices.”

Gray agreed, saying the last chapter of the book focuses on interviews with descendants of those murdered but otherwise does little in terms of showcasing the Osage legacy.

“Maybe all my fears are unfounded, and this is going to be the signature story where Hollywood finally gets it right,” he said. “But, if my concerns are at all legitimized, it’s because of past treatment of Indian stories in Hollywood.”

RedCorn, who is researching his family’s story during that time period, said he thinks about his late grandfather and how he had to survive the trauma of having his father murdered.

“There’s a lot of healing that took place in that time period, and I’m afraid from the movie’s perspective the narrative of Osages being victims and not having agency is troubling.

“But from a strictly authorship type of angle, we can’t expect somebody else to tell our story. That’s probably not going to happen. The stories that we have in the community, they’re not from victims. They exist from survivors.