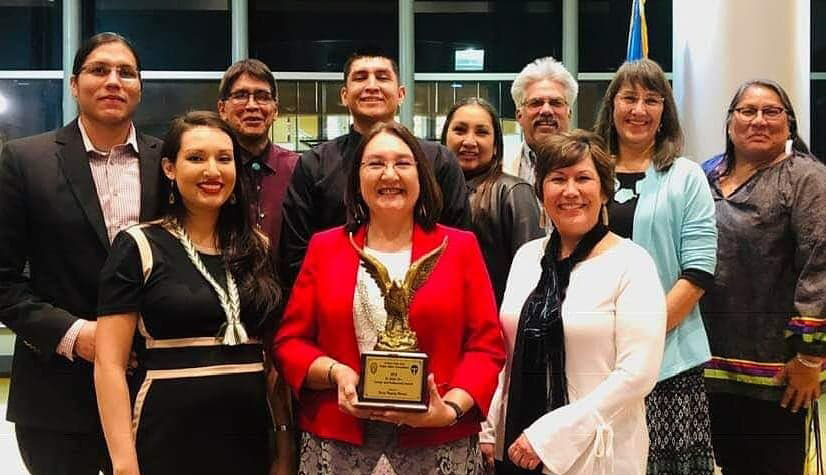 Mother and daughter honored for their contributions to their communities

TULSA, Okla. — A mother-daughter duo from the Grayhorse district ended 2018 with some new hardware on their mantles.

As part of its annual awards banquet, the Oklahoma Federation of Indian Women named Jessica Harjo its American Indian Woman of the Year.

“An award like that, you usually see going to someone you usually look up to. At my age, you’re starting to move up into that other arena ... with experienced women who are established in their careers and trying to help out the community,” she said. “That’s why it was special to me. All the work I’ve been doing is apparently doing something good for people and I’m on the right track.”

A 2003 graduate of Woodland High School, Harjo is currently finishing her doctoral dissertation in graphic design through the University of Minnesota while teaching distance learning undergraduate classes.

For her master’s thesis, Harjo created an Osage language typeface that can be put in Unicode, thus making it accessible on any digital device. She has conducted most of her doctoral dissertation research at the Osage Language Immersion School.

Since moving back to Tulsa in 2018, Harjo rejoined OFIW and other organizations as part of an effort to get reacquainted with the community after spending six years in Minnesota.

“For a little while, it was like re-introducing myself to people who know my family,” she said. “I got used to it up there. They know me as Jessica Harjo, but down here, I’m still Jessica Moore in a lot of places. I’m still transitioning on that one now that I’m back down here.”

Meanwhile, her mother, Terry Mason Moore, received the Dr. Ralph Dru Career and Professional Award from the Greater Tulsa Area Indian Affairs Commission as part of its annual Dream Keepers Awards Banquet. The commission annually honors elders across the Tulsa metropolitan area who have shown an extraordinary commitment to their community in at least one area.

A graduate of Northeastern State University and the University of New Mexico School of Law, she has more than two decades of experience as a tribal court judge, including stints with the judicial branches at the Pawnee Nation, Miami Tribe, Shakopee Mdewkanton Sioux Community, Santee Sioux Nation and the Ponca Tribe. The Fairfax resident has also worked with multiple non-profit organizations in the area, including Pawnee-Osage Court Appointed Special Advocates.

As the first woman in her family to graduate from college, Mason Moore said there were not a lot of role models for her to look up to when she graduated from law school in the early 1980s. While grateful and honored to be recognized, she urged other women to keep giving back to their communities.

“I do a lot of community work and legal work,” she said. “I’m glad to be recognized locally. I would encourage other young women to not give up and keep giving back to the community, as that’s the greatest reward.”