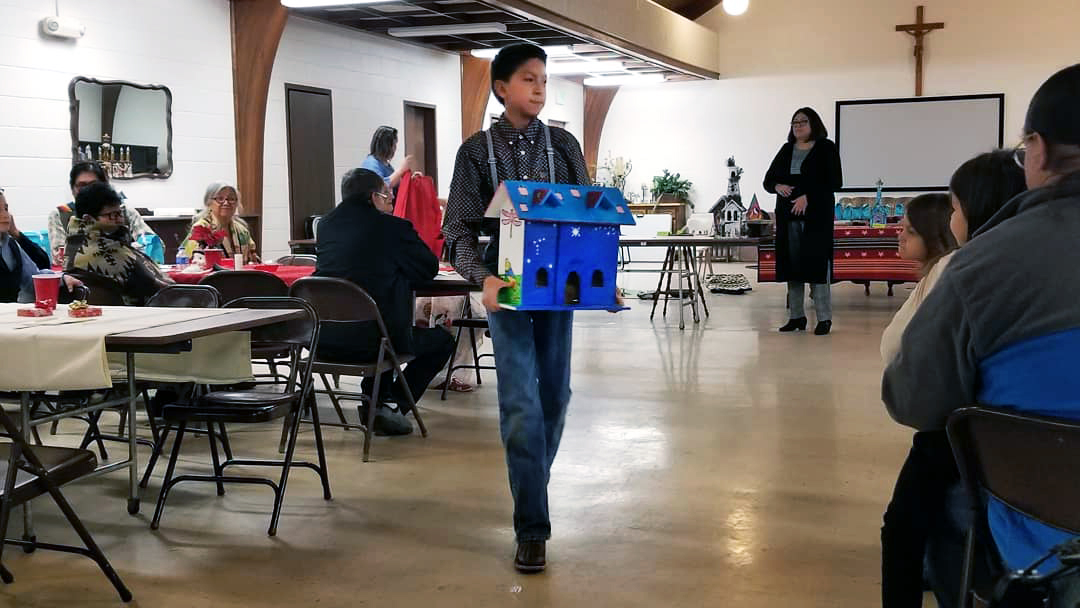 The CASA nonprofit hosts the annual auction featuring birdhouses decorated by local artists and craftsmen, including Osages and other area Native Americans. Funding raised is used to help CASA recruit and train community volunteers to speak for abused and neglected children involved in tribal and state court cases in Pawnee and Osage counties.

“I think it’s going to continue to grow,” Donnelly said of the public’s participation in the auctions. Even from the participating artists expressing “we want to do it again,” Donnelly noted an enthusiasm from those who decorated birdhouses and wished to decorate and submit another birdhouse in the next coming year.

Helen Norris, executive director of CASA, said the organization is one of a few nationwide CASA entities (out of approximately 950 nationwide) to serve children in both state and tribal court cases. Norris said her CASA organization is in need of volunteers to work with the children involved in the court system to help provide monitoring reports to judges who may use the information to make rulings in the cases.

CASA volunteers go through 40 hours of training and they are “sworn in by a judge and become officers of the court. They can come to any of the four courts we serve, and we work with eight attorneys,” Norris said. The training hours include 30 hours required by all CASA volunteers and an additional 10 hours on Osage and Pawnee tribal history and customs for working in cases in both state and tribal courts.

For this year, Norris said CASA has worked with 80 children, which is the most so far for the CASA organization since its 2009 launch. Those 80 children are involved in 30-40 cases in all four state and tribal court jurisdictions, she said, emphasizing the need for more CASA volunteers.

Osage attorney Terry Mason Moore attended the event and said she’s worked with Norris for years while serving on the CASA advisory board and echoed the need for funding to help CASA volunteers serve the children in court cases. Moore, who also previously served as a Pawnee Nation Judge, has noted the CASA service is invaluable considering CASA volunteers regularly visit the child, attends court hearings and provides reports to the court and state on the child’s progress while state caseworkers juggle several cases assigned to them and may not spend as much time with children as a CASA volunteer can.

The birdhouse auction, held at the Immaculate Conception Catholic Church Parish Hall, opened with a dinner for attendees, which included artists and tribal and local community members from both Osage and Pawnee counties. Some of the birdhouse artists also attended the event with their families.

Tulsa area Auctioneer Jay Litchfield conducted the birdhouse auction for the 34 birdhouses submitted for the 2018 event. The highest bid came from a Pawnee area bidder on a large metal-welded birdhouse that was submitted before the auction and was the starting bid at $2,000. No one else made a bid, so the $2,000 offer stood.

Pauline Echohawk (Pawnee) decorated a birdhouse covered in leather with a beaded black roof and a beadwork strip that wrapped around the sides. The winning bid came from Julie Standing Bear, who bid $265 on the birdhouse.

Sean Standing Bear submitted two birdhouses with one decorated in blue paint and another decorated with University of Oklahoma crimson and cream colors and “Boomer Sooner” painted on the roof. The Waterbird Gallery owner Danette Daniels bid and won the blue house for $95. LeeAnn Ammons won the OU-decorated birdhouse for $65.

Ammons also won a $105 bid on the birdhouse decorated by Shaw Duty, who decorated it in memory of her late cousin Blake Ashley Sisk with floral patterns, a butterfly and jewels and pearls for the house trim. “(Blake) loved all things beautiful and when I think of her, I think of flowers, pearls, diamonds and beauty. Her friends called her Wonder Woman, hence the WW plaque on the back of the birdhouse,” Shaw Duty wrote in an artist statement.

Jacobs decorated a birdhouse using red and blue colors and a man and woman on opposite sides to show the ancestral division of male and female roles in Osage culture, he told the attendees. Carole Revard won the birdhouse with an $85 bid.

Ted Moore decorated a tall blue birdhouse, which he called “Sky Lodge” with the art reflecting “the stories, families and the wonderful things that happen during life,” according to an artist statement he displayed with the birdhouse.

Ponca decorated three birdhouses, including a yellow one that included Osage ribbonwork on the roof and six side openings decorated with small ornaments and illuminated thanks to battery-powered holiday lighting placed inside the birdhouse. Ponca’s birdhouse sold for $165.

Harjo painted a birdhouse titled “Morning Song” featuring two birds painted on the side with background color shades of orange, yellow, blue, purple and red to represent those which can appear during sunrises. Harjo added she painted the birds with wings colored as if they were wearing Osage blankets “because it can get chilly in the morning.” Daniels won the birdhouse with a $500 bid.

For more information on the CASA operations or to volunteer as an advocate, Pawnee/Osage CASA is on Facebook and can be reached at (918) 762-3776.