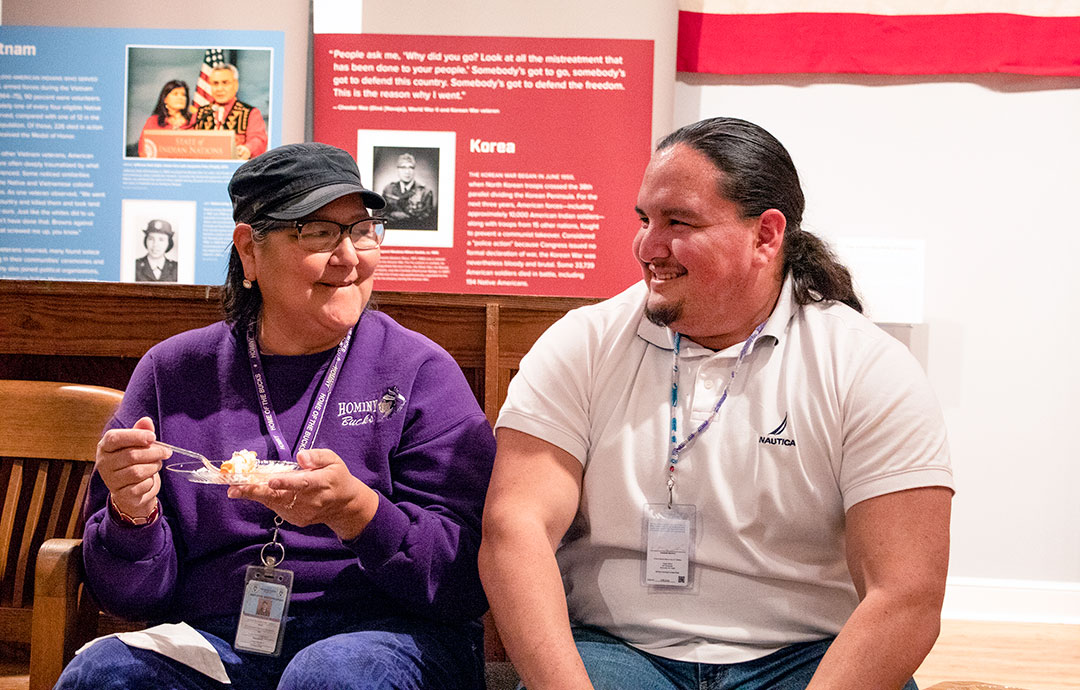 Determination and perseverance are definitely in Talon Satepauhoodle’s playbook.

“The Omaha Beef gave me a contract after I sent them my highlights from Bacone [College],” he said. “They liked what they saw, and they actually emailed me their contract about three, maybe four times in two days.”

The Omaha Beef is a professional arena football team based in Omaha, Nebraska. The Omaha Beef is part of the Champions Professional Indoor Football League and recently celebrated its 20th season. Satepauhoodle will be playing Offensive Line for the team and reports to Omaha on March 1.

Satepauhoodle said even though he’s signed a contract it doesn’t mean he’s on the team. He has to make it through training camp, play in their season opener and then he’ll be officially on the team until October. He said March 1 is his last “rest day.” He will meet with season ticket holders for a meet-and-greet, check out his football pads and then begin a week to two-week training camp that following Monday.

“Football, I have always wanted to be included in it somehow,” Satepauhoodle said. “If I didn’t get to play, I wanted to be a coach.”

Satepauhoodle, Osage and Kiowa, is 25 years old and stands at 6 foot 7 inches, weighs 330 pounds and is a former Power Lifter. He is from Hominy, Oklahoma, and played football for the Hominy Bucks in High School. He then played for two years at Bacone College in Muskogee, Oklahoma, where he received his associate and bachelor’s degrees in American Indian Studies. He was also named All-Conference and Champions of Character two years in a row while playing for Bacone.

He said he also received offers from two other indoor football teams, the Oklahoma Flying Aces, based in Enid, Oklahoma, and the Duke City Gladiators, based in Albuquerque, New Mexico. He chose the Omaha Beef because they are the longest running indoor football league and six players from their team last year advanced to the Canadian Football League, Canada’s professional football league.

The Osage Nation Museum held a going-away party for Satepauhoodle on Feb. 28, where he worked as a guest representative. Before his party began, he was still working, explaining the Osage’s history in the Missouri River Valley to two out-of-town patrons. One of his coworkers, Kimberly McCauley, said what was also impressive about Satepauhoodle is that he is a proficient beader and often brought his beadwork to the museum.

“We would have Talon beading in one corner, and Pauline Allred finger-weaving in another corner, it was pretty awesome,” she said. “We were quick to become friends because he’s just such a friendly person.”

Principal Chief Geoffrey Standing Bear also said it was going to be a loss for the museum because Satepauhoodle is knowledgeable about Osage history, customs and traditions. He told Satepauhoodle that he was very proud of him and he hopes he comes back to the Nation in the future.

Marvin Jones, Asst. Head Coach and Defensive Coordinator for the Omaha Beef, said he reached out to Satepauhoodle after he saw his tapes.

“He’s a big guy, we love size and we felt like he would be a perfect fit for our league,” Jones said. “We develop players, help them become better, we can be used as a developmental league and our players hopefully go to higher leagues and advance.”

Jones said he thought Satepauhoodle had a lot of potential.

“Players like Talon, they’re kind of what we call ‘in-between players,’ depending on what colleges they went to. Maybe they didn’t get the playing time or exposure they needed to advance,” Jones said. “That’s why I hunted him down and felt I could help him get better.

“I love to work with these players, that’s what I like to see, I like to see them advance and help them accomplish their dreams.”

The Omaha Beef's preseason game is March 16 and their season-opening game is March 23, both at the Ralston Arena in Ralston, Nebraska. The team also has games in Oklahoma, Kansas, Iowa and Texas. The team's season ends June 22.

For a schedule of games, visit the Omaha Beef Football website at https://beeffootball.com/schedule/