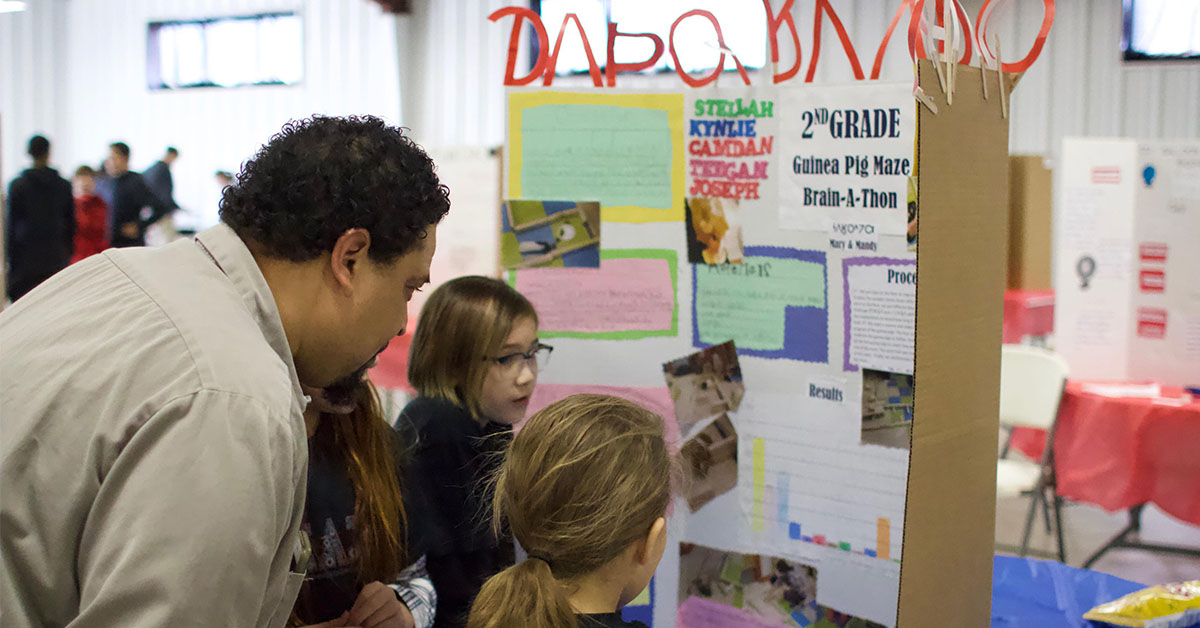 The 3rd Annual STEAM Science Fair, hosted by the Osage Nation Education Department, was buzzing with activity on Jan. 30 at the Osage County Fairgrounds.

This year the fair was condensed to two days, unlike previous years.

“With two days, more schools attended each day and the students were exposed to more projects. We increased the number of judges and reorganized the project layout, this made the process more efficient,” said Jennifer Holding, STEAM Coordinator. “Students enjoyed the snacks and lunch donated by Osage Casinos, a photo booth, a drone activity, a sensory station provided by Osage Nation Child Care, and games with Osage Nation Prevention Program during their presentation breaks.”

Holding said the top three winners from each grade will have the opportunity to compete at the Bartlesville District Science Fair. The education department will pay their entry fee as a reward for winning.

The top seven project winners, from each grade, will enjoy a fun filled day building robots at Bricks for Kidz, a delicious lunch at Hideaway Pizza, and creative art workshop at Pinot’s Palette, she said.

The teachers from each school that participated at the science fair received $100 in supplies for their science classroom. Holding said the education department partnered with the ON Environmental and Natural Resources Department, Osage Casinos, ON Communications, ON Child Care, ON Prevention, Daposka Ahnkodapi, Osage County Public Schools and faculty, and the Osage County Fairground employees.

“We had a remarkable group of judges this year. We look forward to next year and hosting our 4th Annual Osage Nation STEAM Science Fair,” she said.

Donna Gray, a Woodland Middle School student in the 8th grade, said after a tornado hit in downtown Fairfax in the fall, it inspired her science project. She said she didn’t know of anyone in particular who was impacted by the tornado, but it made her curious about tornadoes.

“I wanted to know why tornadoes form,” she said. Her presentation had various facts on a poster board and she said that when people don’t have storm cellars, they can be in danger. She discussed various ways to be prepared in the event of a tornado and where to take cover inside your home if one should happen to hit nearby. “We go to the center of our house.”

The first grade of Daposka Ahnkodapi made a class project for the fair and named it “How to Build a Ship; Floating Titanic.” The class built different ships out of different materials to see which one would float better and they also learned about the Titanic’s history.

The second grade of Daposka Ahnkodapi made “Guinea Pig Maze Brain-a-Thon” where they tested their two class guinea pigs by enticing them with different vegetables and fruits to see which one would make the guinea pigs run through a maze of their making. Their graph had the Osage words for each vegetable and fruit they tried to entice the guinea pigs, and it was written in English and the Osage orthography. The times of each guinea pig was also recorded on the graph.

Kynlie Jones, a second grader at Daposka Ahnkodapi, explained that out of all the fruits and vegetables they tested, “broccoli was our guinea pigs’ favorite.”

The top overall winners are listed below.

Brandon Hight and Joseph Unap with Which Wood Burns Faster?

Kadin Galviola with Got Lint? Use It!

Elle Johnson with How Much Bacteria is in Water?

Madison Martin with Cutting the Fat

Caroline Perrier with Brighten your Smile

Skye Amberson with Biofuel on Biofuel

On both days of the science fair, there were categorical winners that received ribbons:

The first graders are:

The second graders are: