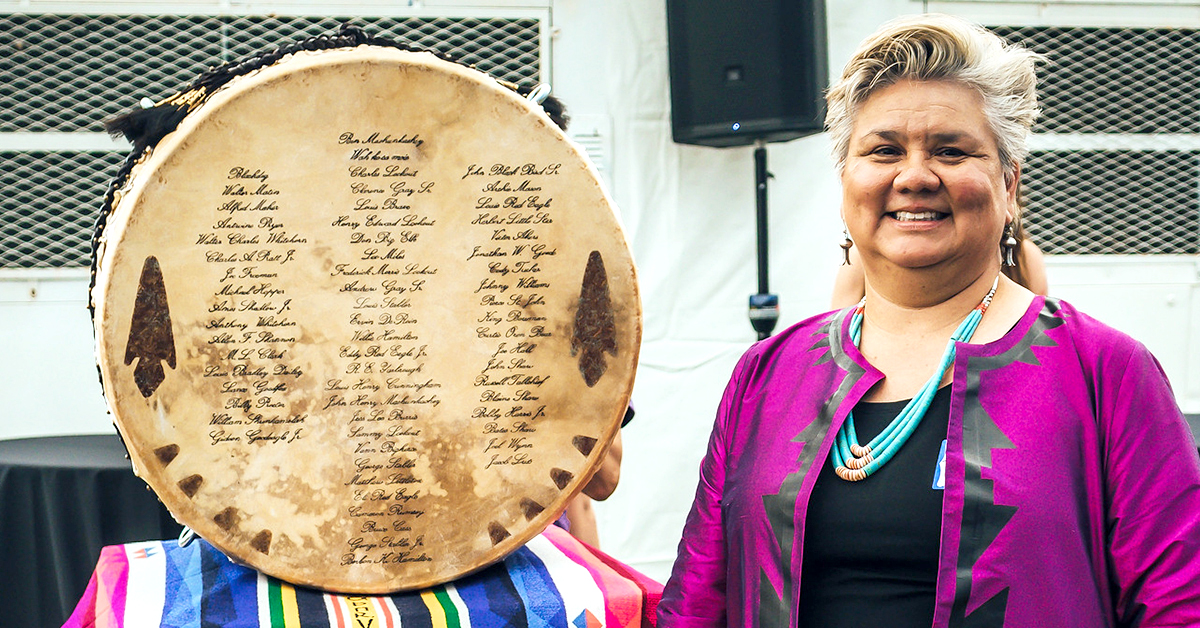 ON Foundation’s ‘Voices From The Drum’ exhibit showcases Osage artistry

Photo caption: Osage artist Jennifer Tiger inscribed the names of the three district’s Drumkeepers, past and present, on her drum for the Osage Nation Foundation’s “Voices From The Drum” exhibit. CODY HAMMER/Osage News

Osage artistry will soon be traveling the country in a permanent exhibit produced and paid for by the Osage Nation Foundation.

The Foundation debuted the traveling exhibit, “Voices From The Drum,” on June 25 in an air-conditioned tent on the Osage Nation Museum’s lawn with more than 150 people in attendance. The exhibit consists of 19 handmade bison-hide drums, each given to an Osage artist to pour their creativity into – and they did.

“I knew everyone would like the exhibit, but I didn’t anticipate the emotional reaction we received,” said Bill Webb, the Foundation’s executive director. “There were tears in some people’s eyes as they viewed the drums.”

Each artist’s style was showcased in their drum. From Jessica Rosemary Harjo’s painted imagery of creation, to Norman Aker’s heartland, to the naming of all past Drumkeepers by Jennifer Tiger. Beautifully painted and imagined, each drum unique.

The exhibit was only available for public viewing for two days in Pawhuska, but it will be back for display at the ONM in 2020, Webb said. Currently, finishing touches are being made to a 15-minute documentary on the artists and their drums that will accompany the exhibit. Webb said he has been in talks with the Denver Art Museum and Crystal Bridges in Bentonville, Ark., who are interested in displaying the drums. He said the exhibit will travel the country for the next five to seven years.

The documentary explains the role of the drum to the Osage people according to each artist and the emotions and history they bring with them from their respective families to create the artwork seen on each drum. The project promotes the Osage people, Osage art, culture and each artist, Webb said.

The drums were handmade by drum maker and singer Rock Pipestem, Osage/Otoe, who also decorated his own drum. Each artist received up to $1,500 for their work.

The Osage artists are:

For more information, visit the ON Foundation’s website at www.osagefoundation.org. To view more photos from the exhibit, visit the Osage News’ Flickr page at https://www.flickr.com/photos/osagenews/albums/72157709701767812