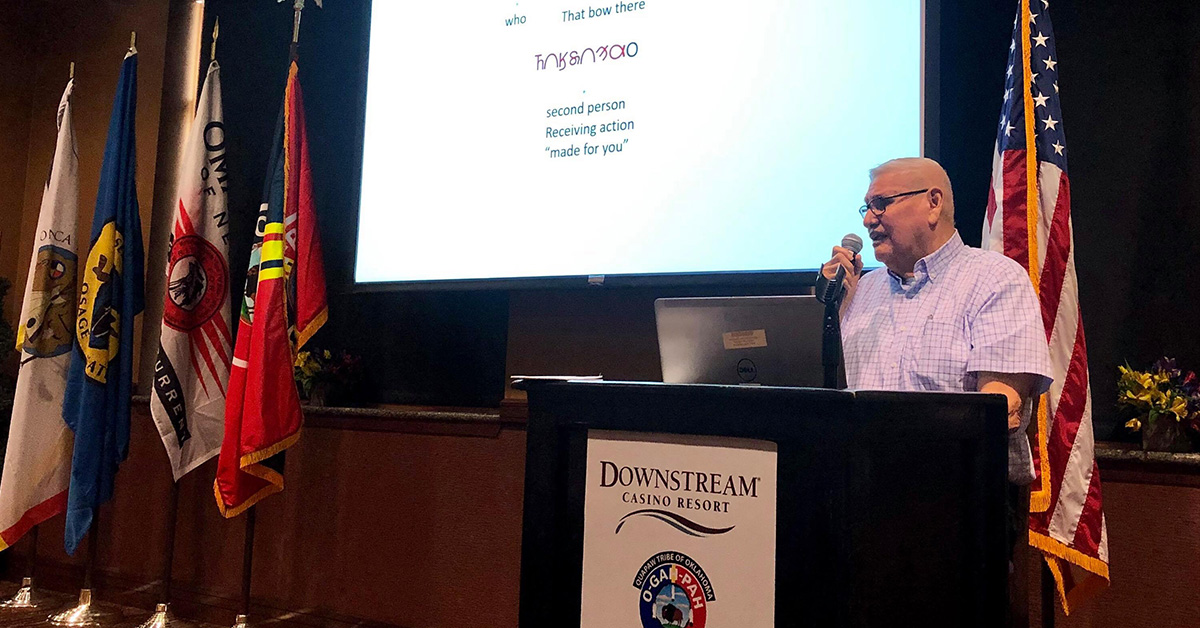 Six tribes come together with one purpose: Language Preservation

QUAPAW, Okla. – The organizers for the annual Dhegiha conference only planned for 150 participants, but more than 200 came.

Elders, teachers, students and their children came from northeastern Oklahoma and Nebraska to attend the 9th Annual Dhegiha Language Preservation Conference at the Quapaw Nation’s Downstream Casino and Resort. This year’s theme is “Our Dhegiha Children.”

“We’re hungry for our traditional values,” Lookout said. “Our younger people, even more.”

Chairman of the Dhegiha Preservation Society William Lynn said the idea for the conference came in 2004 when Lookout and Tracey Ann Moore recognized a need to bring language speakers together from the six Dhegiha tribes made up of the Kaw, Omaha, Osage, Ponca, Northern Ponca and Quapaw tribes.

“We wouldn’t be anywhere right now if it weren’t for Uncle Mog,” Lynn said.

Lookout described the series of events that led the Osage to lose their language.

Osages in the early to mid-1900s recognized that the next generations would need to become educated to survive and thrive in American society, so they sent their children to boarding schools. Receiving educations and encouraging young Osages to leave behind and put away their Osage culture led to the erasure of traditions.

“It’s allowed us to lose our language and lose some of our traditional values,” Lookout said.

He said his elders told him that his generation could not understand the old religion they had in Kansas before they moved to Oklahoma, or their traditions. His elders said they gave his generation and those after him something new to carry on, the Inlonshka and the Native American Church.

He said the Grayhorse people accepted their drum from the Ponca, and the Hominy and Pawhuska Districts accepted their drums from the Kaw. He said his elders told him that prayers were said by those who could still make those prayers to oversee generations of Osages to come.

“So, our drums come to us as a way to replace a lot of things. They took those drums and turned it into a social dance and that social dance has lasted us until now,” he said.

“We have over probably ... straight dancers are around 300, getting close to 400 on a Saturday night and just that much women on the outside, so sometimes we have 800 dancers under our arbors.

“It’s going to get that way and someday we’re going to outgrow it.”

“I’ll never see Osage really documented and completed and ready to put a curriculum in place,” Lookout said. “But I want to leave something for our young people to pick up and maybe some young person will see some documents laying in the corner and pick it up and say, ‘Hey, that’s Mog’s work.'”

Speakers and preservationists from the five other tribes also presented and spoke of their struggles. Teachers from the Omaha Tribe of Nebraska, which brought a charter bus of 56 people and others who drove themselves, said they recently requested their tribal council to declare a state of emergency for their language. They said they are down to 14 speakers.

The mission statement of the Dhegiha Preservation Society states that the Osage, Omaha, Quapaw, Kaw, Ponca and Northern Ponca peoples are bound to one another through a shared history, ancient social, political and cultural relationships and a common language, the latter of which is in jeopardy of extinction. Cognizant of the critical important of the Dhegiha Language to the cultural and social well-being of each respective tribe, the undersigned do hereby come together to establish the Dhegiha Preservation Society for the purpose of protecting, preserving and perpetuating the Dhegiha Language through training, education, publication, program development, curriculum development, outreach and social and cultural exchange activities.