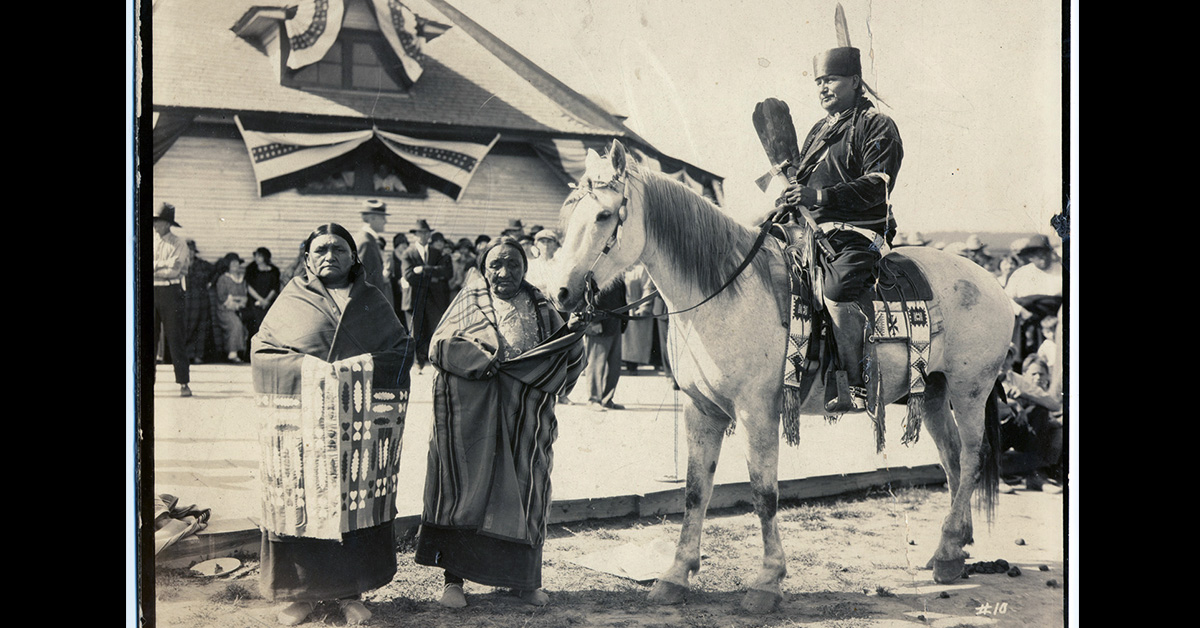 Osage artisans needed for ‘Killers of the Flower Moon’

Photo caption: An undated photo from the early 1900s shows Osages at a celebration in traditional clothing. Courtesy Photo

Osage artisans need to be at the ready.

Costume designers for the film, “Killers of the Flower Moon,” based on David Grann’s bestselling novel about the Osage Reign of Terror and the birth of the FBI, visited the Wahzhazhe Cultural Center on Oct. 22 and said they want Osages to make the traditional clothing needed for the film and they need those clothes made before March, according to WCC Director Addie Hudgins.

“We’re still working it out, but they did express that they want to use as many Osage artisans as they can,” she said. “We’re probably going to need everybody. It’s going to be a crunch. She said they want to start filming in March.”

WCC employee Sammy Lookout modeled Osage men’s clothing and for the women’s clothing, they put the clothes on Powell so she could get a sense of how the clothes were worn, how they felt and the materials they were made from.

“We had John (HorseChief) pull up a bunch of pictures from the 1920s. He pulled everything from 1915-1930 that we have, so they could look through those pictures,” Hudgins said. “They wanted to touch base and see how things were made and how they were worn, what information we knew, what we have. So, we pulled a bunch of books that we had, just researching.”

From the cultural center, the designers went to the Osage Nation Museum for more research and then they went to Whitehair Memorial, which holds many historical clothing items from the early 1900s, Hudgins said.

Anyone who has had experienced making Osage clothing knows they aren’t made overnight. Even for the most experienced weaver, just one woman’s fully woven yarn belt can take anywhere from two to four weeks to make.

Hudgins said Powell mentioned “hundreds” of moccasins. She said with that amount of clothing needed, they are currently discussing the best way to select artisans. She said they will most likely have to make a call for Osage artisans. They will make that announcement soon.

“She didn’t say anything specific about the script, but she did say ‘hundreds of pairs of moccasins.’ And I was like ‘Hundreds?!’” Hudgins said.

Hudgins said the agreement that is being worked on would ensure that all clothing made by Osages for the film would be given back to those Osages after the filmmakers are finished. For example, if one person made 10 Osage shirts, they would get those shirts back after filming.

“So, it won’t be in storage somewhere in California. The person that makes it gets it back,” Hudgins said.

Peterson emailed Hudgins and wrote: “Thanks for spending a few hours with us. Being able to see, touch and learn about the weaving and ribbonwork was so inspiring. We’re very excited to work with you and can’t wait to come back and see more.”

According to IMDB.com, Powell is a three-time Academy Award winner for Best Achievement in Costume Design for The Aviator (2004), The Young Victoria (2009), and Shakespeare in Love (1998). She has also worked on other films with director Martin Scorsese, including The Wolf of Wall Street (2013), Hugo (2011), and Gangs of New York (2002).

The headline on this story was clarified on Oct. 25 to take out the word 'costume.'