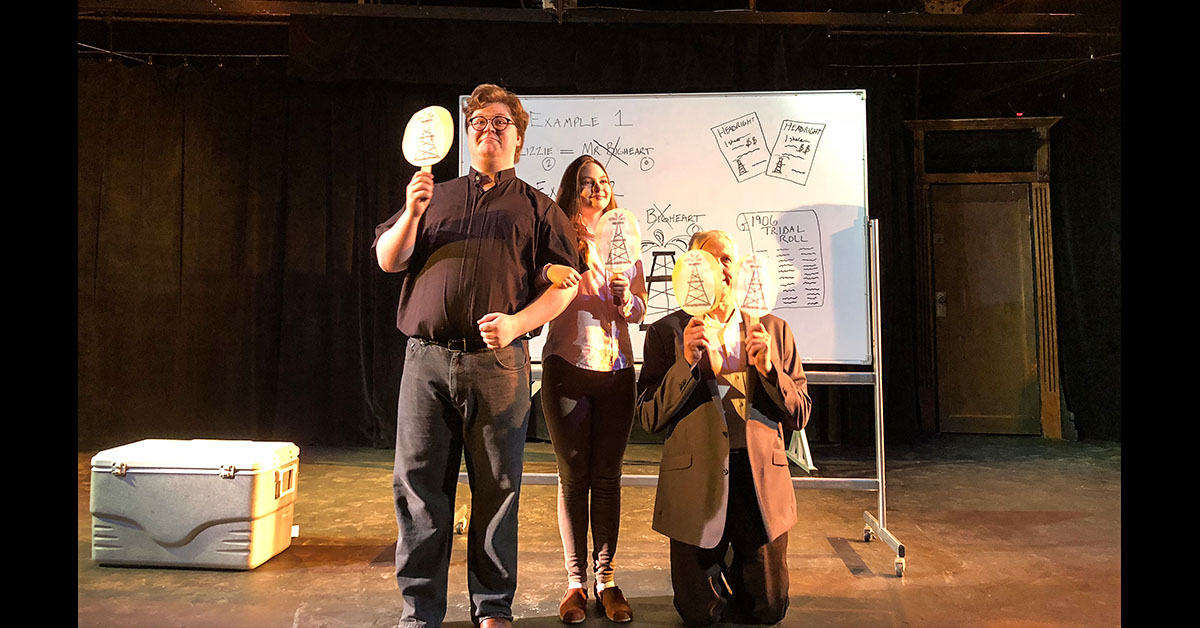 Photo caption: Actors in the 2018 play “Four Ways to Die” explain the complicated system of Osage headrights in the 1920s and how non-Osages could inherit after an Osage’s death. SHANNON SHAW DUTY/Osage News

A full-length play about the 1994 book "The Deaths of Sybil Bolton," by Washington Post journalist Dennis McAuliffe, will premiere in Tulsa at the Lynn Riggs Theater on Nov. 1.

The play, an extension of the TATE-award winning one-act play “Four Ways to Die” by Playwright David Blakely, is a story about McAuliffe’s self-discovery after he learns about his Osage ancestry and begins to unveil the clues surrounding his Osage grandmother’s murder in 1925.

“I read it 10 years ago, it’s been sticking with me for that long,” said Blakely in 2018. “I was commissioned to write a short play and I wanted to write about this. My last few plays have all been about social justice and I think this is a story that needs to be told.

“It got sparked by the popularity of ‘Killers of the Flower Moon' which is a wonderful book – but it doesn’t have the personal anchor that Denny has to telling this story, that you need to tell this story and that’s what I love about it.”

When McAuliffe’s book was published in 1994, it was hard for many Osages to read, and many refused. It addressed the Osage Reign of Terror in a way that had not been written or spoken about before. The in-your-face facts and descriptions from the FBI files and police reports that named many prominent families, both Osage and non-Osage alike, that McAuliffe uncovered for the world to see.

One of the characters in the play, Bryan Burkhart, was also found guilty of helping to kill Anna Brown, one of the murders depicted in “Killers of the Flower Moon.” Burkhart was also a person of interest McAuliffe researched in the death of his grandmother.

“I looked at Bryan Burkhart’s testimony,” Blakely said. “He’s a chilling, cold-hearted man, and I purposely made him funny so that when you see just how cold-hearted and brutal he is, it sneaks up on you. You see him as a bumbling fool and it’s terrible what happens.”

“So, here’s something I didn’t realize until we were in rehearsal, is that Denny is a 40-some-year-old man investigating a 21-year-old’s death and when you put them on stage – it’s different, abstracting it,” Blakely said. “That you see this middle-aged man and you see this child, that is his grandmother and she died because of all these terrible things that white people did. And, seeing that relationship for me, was sort of a revelation in terms of looking at the play.

“I think that you have to have empathy for other people and the story cries out to be told to a larger and larger audience. The story is that powerful, and that’s not me – it’s Denny, and the terrible things that happened in the 1920s.”

McAuliffe said he has not read his book in 25 years.

“I read [Blakely’s] script and it’s almost like re-reading the book,” he said. “But, to see all these actors and the comic relief, and the ingenious way they described the headright system – it was really good.”

McAuliffe will be in attendance at the premiere of the full-length play on Nov. 1. “The Deaths of Sybil Bolton” will be republished in the spring, this time with a foreword by author David Grann.