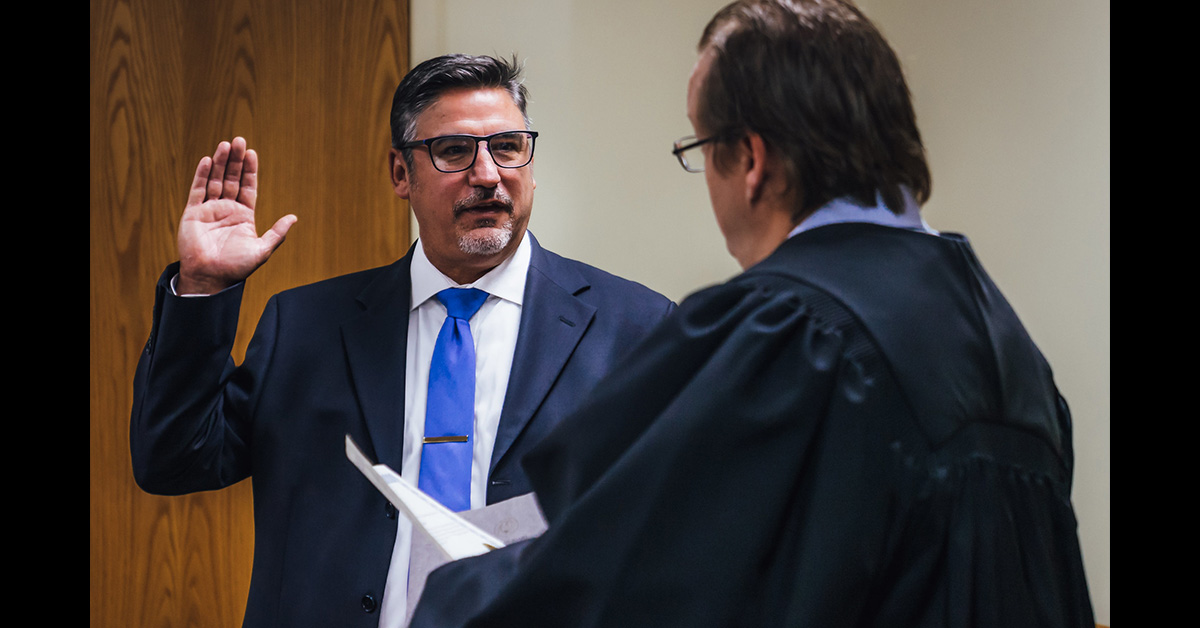 Clint Patterson is now serving as Osage Nation Attorney General after taking his oath of office on Oct. 7 at the tribal courthouse.

In early October, Principal Chief Geoffrey Standing Bear appointed Patterson to the top AG position after former Attorney General Holli Wells resigned in wake of a Sept. 16 arrest for Driving Under the Influence in Pawhuska.

As with other appointees made by the Principal Chief, Patterson will be subject to confirmation consideration by the Sixth ON Congress when they meet for the 2020 Hun-Kah Session next March.

On Oct. 7, Patterson took his oath to serve as interim Attorney General with family members and other ON government officials present. Chief Trial Court Judge William Oldfield administered the oath that day in Pawhuska.

In a statement, Patterson said: “I am humbled and blessed by Chief Standing Bear’s appointment as the Nation’s third Attorney General. I look forward to serving the people of this great Nation.”

Patterson started working for the Nation as an Assistant Attorney General in 2011 while Jeff Jones served as the inaugural Attorney General under the Nation’s 2006 reformed government. Patterson continued his work with the AG’s office when Wells was appointed by Standing Bear to serve in 2015 and later confirmed by Congress.

According to Osage law establishing the Office of Attorney General, its operations are independent of the three government branches and the Attorney General position is in charge of establishing administrative and operating policies for the office and to enforce the provisions of the Osage Constitution and laws of the Nation. The Attorney General is authorized to appear for the Nation and prosecute and defend all actions and proceedings, civil or criminal, in the Nation’s Trial and Supreme Courts, as well as legal interests in the Nation’s dealing and relations with persons/ organizations outside the Nation as requested by the Principal Chief and Congress. The Attorney General also represents the Nation in state district courts on Indian child welfare or social services matters involving enrolled Osages or children eligible to become members.

Also, the Attorney General is authorized to give the Principal Chief or the Congress and its committees formal legal opinions (non-legally binding, but persuasive authority) on such matters within the scope of their duties as they may request from time to time, and to give legal advice to the boards/ commissions and instrumentalities of the Nation.

For example, Patterson represented the Nation in the Reta Lintner case that is currently in the Nation’s Trial Court. That disenrollment case centers on whether Lintner is an Osage citizen. A petition for Lintner’s disenrollment was first filed in April 2016 after the ON membership department staff reviewed a file directly connected to Lintner and noticed a notation that said the person was not eligible for a CDIB.

As First Assistant Attorney General, Patterson has also authored requested Attorney General’s opinions in 2018 and 2019. One opinion (requested by Standing Bear on behalf of former Osage Minerals Council Chairwoman Marsha Harlan) questioned whether an OMC member, who is an oil producer with ownership in a company that does business with the Nation presents a conflict of interest within the laws of the Nation.

A second question (requested by Standing Bear) asked if the Nation’s Human Resource Department positions defined in the Nation’s Workforce Pay for Performance Act can be updated or changed as the Executive Branch deems appropriate. A third question (requested by Assistant Principal Chief Raymond Red Corn, who was acting Principal Chief on April 19, 2018) asked how many Congress members constitute a majority for the purpose of passing bills or resolutions when the 12-member Congress is only populated by 11 members.

According to the Nation’s statement, Patterson is the great-grandson of Osage original allottee Henry Peace. Before working for the Nation, Patterson worked in private law practice and Indian housing. He graduated with his Juris Doctorate from the University of Oklahoma where he served as president of the Native American Law Student Association and is a member of the Gamma Delta Chapter of Sigma Chi Fraternity.

For more information about the ON Office of Attorney General, go online to: https://www.osagenation-nsn.gov/who-we-are/attorney-general