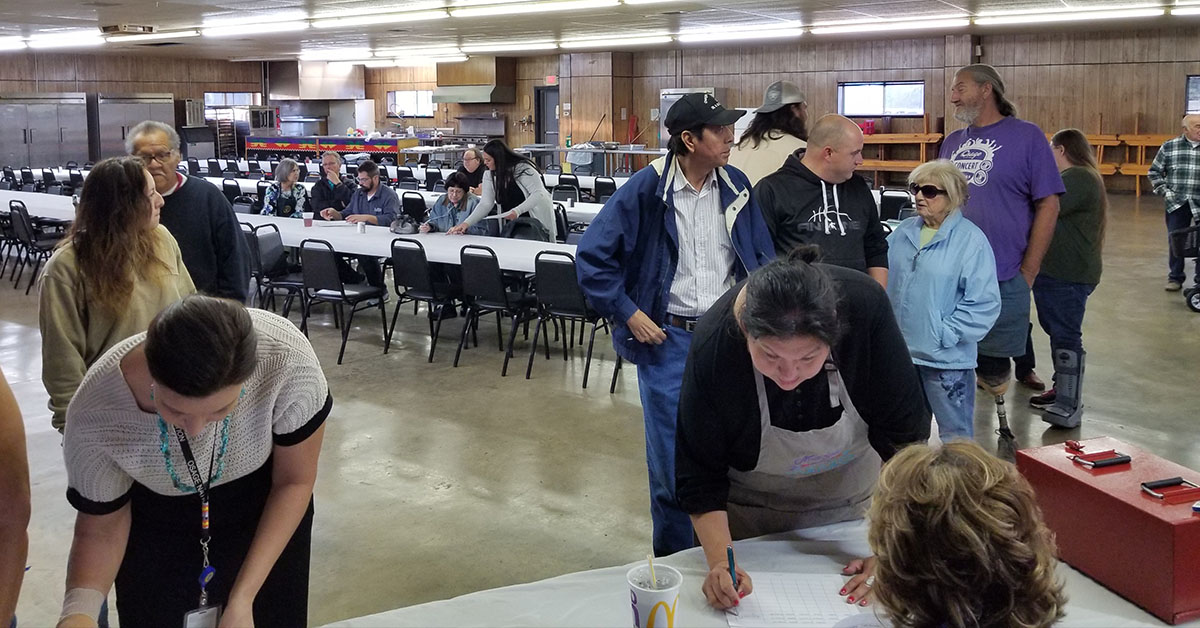 Photo caption: The Osage Nation Election Office posted the results of the 2019 Pawhuska Village Committee election on Oct. 21 following an initial election and a run-off election for the fifth spot on the Village Committee due to a tie between two candidates. BENNY POLACCA/Osage News

The Osage Nation Election Board assisted with the Pawhuska Village election as it has in recent years and counted the votes for the posted results that night. Outgoing Village Committee members are Patrick Luey and Kathryn Redcorn.

The one-night village election process started at 6 p.m. with the Election Board calling for nominees as the village residents gathered inside the Wakon Iron Community Building. The residents voiced their nominations, which were seconded by another resident present.

A total of eight residents were nominated that night including Sarah Ramsey, Williams, Redcorn, Cherokee and Fawn Cheshewalla, Schutz, Red Eagle and Dean Carter. Afterward, the residents verified their village address with the Election Board members who checked the names with a list of residents provided by the Village Committee, said Assistant Election Supervisor Courtney Piearcy.

Residents voted for up to five names on their paper ballots, which were then turned into a locked metal box provided by the Election Board and monitored by an attending ON police officer that night. Afterward, Election Board members Shannon Lockett, Terry Hazen and alternate board member Anita Fields counted the votes once Piearcy opened the metal box to retrieve the ballots at 7 p.m.

Williams won the most votes with 22; Schutz won the second-highest vote counts with 16, and Red Eagle and Cherokee Cheshewalla both won 15 votes.

For the fifth spot on the Village Committee, there was a tie between nominees Fawn Cheshewalla and Carter, Piearcy told the residents, which resulted in a second run-off election between those two candidates only. In the initial election, both nominees received 13 votes.

Afterward, the sitting Village Committee members and the Election Board visited and agreed to have the run-off election for the two tied nominees after approximately 10 minutes to allow residents to call neighbors and family members back to the building who may have left early to vote again.

The run-off election resulted in Fawn Cheshewalla winning with 12 votes and Carter received nine. The results were posted at 8:10 p.m. that night.

Winning her first village election, Schutz joined the Village Committee (also called Five-Man Board) in 2018 to fill a vacancy after Paula Stabler resigned following her election win to the Sixth ON Congress. Cherokee Cheshewalla served on the committee after winning the 2015 village election but later resigned due to family reasons at the time.

Red Eagle is serving his first term on the Village Committee and also serves on the Osage Minerals Council.

On Oct. 24, the newly elected Village Committee met to elect officers with the committee voting Williams as chairwoman; Fawn Cheshewalla is vice chair; Cherokee Cheshewalla is treasurer; Schutz is secretary and Red Eagle will serve as an at-large member.

“I think the women (serving on the committee in recent years) have done a tremendous job and I want to help them continue” plans and future projects, Red Eagle said.

“I’m humbled I got nominated and voted for the committee, I’m here to serve the village the best way I can,” Schutz said.

“Honestly, I was pleasantly surprised about winning. You never know in the elections so I didn’t know what to expect,” said Cherokee Cheshewalla. “I am just wanting to see what the board and residents are wanting to focus on before just jumping into anything. However, I would like to see that the residents are able to get mail delivered in the village if they want. I know that has been in the works for several years... Other than that I am just wanting to continue the efforts of the previous board and work together as a team to make the village the best it can be, no matter what the task is.”

Williams said one of the next projects is seeing a new Wakon Iron Community Building come to fruition. The Sixth ON Congress approved funding for the design process and the planning stages for a new multi-use building in the village continues during a June special session. In planning talks, Williams said future discussions will also touch on when to build a new chapel for the village or if it’s part of the community building project.

For recent accomplishments, Williams noted the committee oversaw the development of the newly named Wakon Iron Park just west of the community building and other plans include adding a basketball court for the village as well. Also, the Village Committee provided benches that are now at the Ed Red Eagle Park along U.S. 60 at the eastern edge of the village property, she said.

Fawn Cheshewalla said she is pleased to be able to serve another term, adding: “There are several items or wants that I hope to achieve with this new board, from developing within our Village to general clean-up and curb appeal… A community goal I hope to achieve is to address the prejudice from the local U.S. Postal Service Office and establish a route extension for Village residents. Mail is delivered to the homes within Hominy and Grayhorse Villages and there should be no bias to a home route delivery for Pawhuska Indian Village residents, which is not currently provided. I hope and will work with the current Board members to address resident safety with adequate streetlights. There is lighting placed within the village square, around the dance arbor and Wakon Iron, but no surrounding roadways.”

Williams said the village’s requests for mail delivery within the village have been denied earlier this year and the committee has written letters about the situation to the state’s U.S. legislators including Rep. Frank Lucas and Sen. Jim Inhofe and they are awaiting any responses.