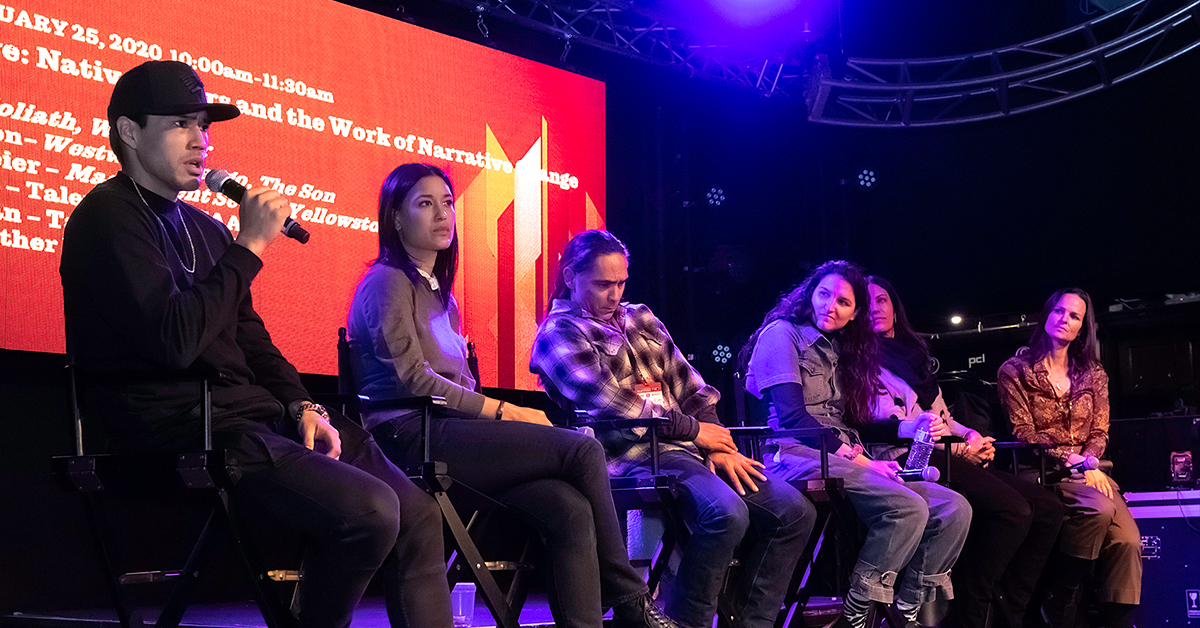 Native actors encourage next generation to tell their stories

Amy Redford, daughter of actor Robert Redford, is a board member of the Sundance Institute and expressed her passion for supporting Native American filmmakers. She encourages the public to support Native filmmakers by inviting friends and family members to watch Native films and show support to continue making more films.

“I’ve seen the program here at the Sundance Institute grow and grow over the years,” she said. “It’s important for Native movies to be marketed in the correct way.”

N. Bird Runningwater is the director of the Sundance Institute’s Indigenous Program and a member of the Cheyenne and Mescalero Apache nations. Runningwater helped organize the Indigenous Filmmakers Lounge and launched new videos before every Sundance film screening to pay respect and acknowledgment to the Ute tribe.

“This has been one of my dreams for our indigenous community to have a gathering space to be able to kind of come together, to celebrate each other and our creativity,” he said.

The Indigenous Filmmakers Lounge was a free event and welcomed all people to attend. According to the event page description, “The Lounge will feature panel discussions, elevated dialogue, networking and live performances during the opening weekend of the Festival with a focus on narrative change and creating opportunities for Native peoples to build sustainable careers in the industry.”

Actor Wilmer Valderrama who has starred in “That ‘70s Show,” “Handy Manny,” “NCIS” and other roles, attended the Indigenous Filmmakers Lounge and expressed the importance for him, as a Latino actor, to sit and listen to the panelists because this event helped him learn more ways to help. He spoke to the audience about people of color becoming allies.

“We want to be here by you,” he said. “You’re not alone in this fight and that all of us, people of color, should fight and finally wave the same flag together as we get the respect that we deserve.”

The Power of Storytelling

Martin Sensmeier is a Native American actor and has had roles in “The Magnificent Seven,” “Yellowstone,” and “Wind River.” He spoke at the Indigenous Filmmakers Lounge on a panel called, “The New Native: Native Actors and the Work of Narrative Change.” Also, on the panel with him were Native American actors Zahn McClarnon and Julia Jones.

“I see the impact storytelling has on people and it’s so important. Stories have the power to motivate people to push through hard times in life,” Sensmeier said.

Jones recently starred in an episode of Disney Plus’s “Mandalorian.” She also had a supporting role in “Wind River” and is currently working on a show for Amazon. She typically starts her day with a list of changes to discuss with the director because she feels responsible for the authenticity of the story and role she plays, she said.

“At the end of the day, the stories I am telling are the most important thing and that guides my career more than creative decisions,” she said.

Valderrama believes it is important to teach and educate one another because then going into the next generation Indigenous people will share each other’s truths and further the efforts of representation.

“Not paraphrase but tell the truth about who we are, and it is vital that we respect where we come from,” he said.

Valderrama wants people of color to share the full story and it requires learning from elders. He said, “Reach out to your older communities and be vulnerable enough to say you don’t know how to do something.”

According to Sensmeier, the key to acting is learning. He enters every role with the mentality of, “Come learning, not learned.” Sensmeier wants to continue learning and become a better actor.

“As a storyteller, as a director or producer, there’s always room to grow in storytelling,” he said.

Sensmeier selects his acting roles based on the character’s complexity. He wants to play three-dimensional characters.

He played Red Harvest in “The Magnificent Seven.” He has seen many children look up to his character and even dress up like him for Halloween.

“You see representation on a screen and as a kid that does so much for you,” he said. “It fills up their imagination.”

According to Sensmeier, many Native roles in film are one or two-dimensional characters, whereas the cowboy characters have complex roles filled with backstory and filler scenes. Natives are villainized from the beginning and have minimal screen time.

“As an audience, we don’t see or get the opportunity to like those Native characters,” he said.

Many Native American actors play Native roles, but it is more challenging for Native actors to play non-Native roles. According to Redford, Native American movie stars should not only play in indigenous films but need to be seen all over Hollywood.

Zahn McClarnon is a Native American actor and has worked on many films such as “Westworld,” “Fargo,” “The Son” and many more. McClarnon was offered the acting job for “Doctor Sleep” and he said, “The first thing I said was, ‘This guy is not Native,’ and they were completely open to the fact that an actor of Native American heritage could play a non-Native role.”

“I’m an actor who happens to be of Native American descent; the actor thing comes first,” he said.

Acting is a challenging but rewarding career path. McClarnon moved to Los Angeles in 1991 to focus on acting. He lived in his car for months and each day worked toward his goal of acting. His advice is to, “Jump in feet first.”

“When you’re first starting out, it’s a really scary thing and it takes courage to get into class,” Sensmeier said.

Sensmeier and McClarnon both advise beginning actors to study and take classes.

“It’s frightening, the idea that you’re going to be critiqued and go in front of people to perform; it’s scary,” Sensmeier said.

McClarnon also suggests meeting casting directors and even moving to New York or Los Angeles because those places are where film productions happen.

“We need more actors. We need more Native actors out there pursuing it, studying in acting and really working on the craft,” Sensmeier said.

Sensmeier talked with Billy Mills, Native American Olympian, about how many Native American communities face poverty and the impact it has on dreaming big. He said, “We don’t know how to dream and we’re afraid to dream.”

Valderrama supports and encourages people of color to act and become involved in storytelling because he sees talent, passion, and the potential to teach future generations.

“Within our movies, within our content, our children’s children should feel not only equal but special,” said Valderrama. “Our children’s children will wake up to a world where they will appreciate our ancestry and not let any national conspiracy suppress the cries and tears from our grandparents, in order for us to be here today.”

The most important advice Jones has for aspiring actors is, “You have to believe in yourself and have to work really hard.”