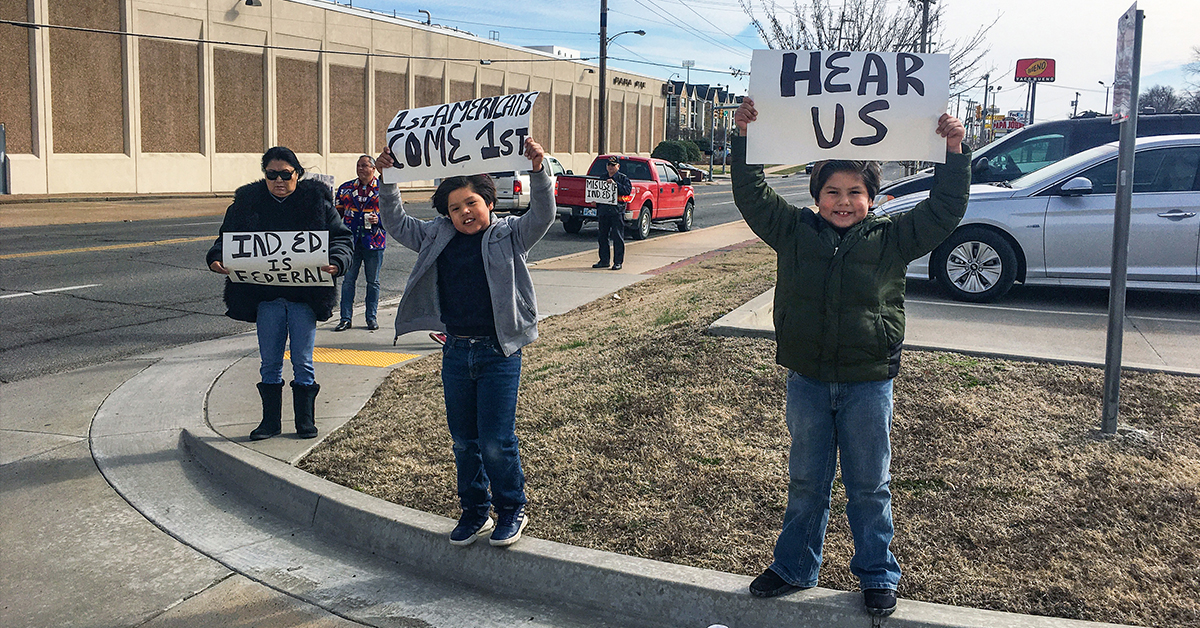 TULSA, Okla. — In light of continued objections from the Native community, Tulsa Public Schools hosted the first of two conversation-focused community meetings Feb. 22 about its plans to overhaul its Indian Education Program.

Divided into small groups scattered across the Wilson Teaching and Learning Academy’s cafeteria, about 30 parents, teachers, students and community members gave district representatives an earful about the needs of TPS’ Indigenous students for two hours.

Attendees were given discussion prompts at their table with about 15 minutes per topic. Prompts included what has worked for the district’s Indian Education Program and what has not; what specific services should get priority and how can the district better support its Native students.

Among those at the Feb. 22 meeting was Michelle Gray, a Cherokee parent of three TPS students at two of the district’s magnet sites, Dual Language Academy and Carver Middle School. Along with concerns that tutoring, cultural programming and other advertised opportunities are not being offered at her children’s schools, she told district representatives that more communication is needed to ensure Native families are aware of the resources available and what they have to do to access them.

TPS has maintained that the reorganization is due to a declining number of 506 forms from students, which is used to determine Title VI funding from the U.S. Department of Education, as well as car tag revenue contributions from the Cherokee Nation.

“There’s nothing on the enrollment forms that says a 506 form is needed,” Gray said, noting that she did not even know about the forms until a teacher, also a Cherokee Nation citizen, pulled her aside. “When I enrolled my kids, I checked the ‘I’ box and thought we were good.

“You have to do a better job of identifying Native students to start with.”

With an incorrect start time circulating online and in some media outlets, the turnout was smaller than the district’s last community meeting, a four-hour affair in late January. A second community meeting is scheduled for 6 p.m. on Feb. 26 at the Wilson Teaching and Learning Academy at 2710 E. 11th St.

Despite pushback from the district’s parent committee, TPS Superintendent Deborah Gist confirmed after the meeting that the reorganization is still slated to go before the board of education in March, although a specific date has not yet been set. District officials also confirmed that Tulsa Public Schools is still working on scheduling the required tribal consultation sessions with the Cherokee, Muscogee (Creek) and Osage nations.

Furthermore, with more than 60 tribes represented among its roughly 3,100 Indigenous students, the district is still seeking guidance from the state Department of Education on whether those consultation sessions need to include additional tribes, such as the Choctaw Nation, which has a sizeable enrollment within the district or those tribes that fall within the 50-mile radius recommendation for districts that are not within a specific jurisdictional area.

Under federal law, tribal consultations are required for school districts that receive more than $40,000 in Title VI funds. Similar to the federal government, the Oklahoma Department of Education recommends 30 days notice, 60 days for a response and an additional 30 days for collaboration if needed.

As currently worded, the department would also have six non-certified teacher’s assistants spread across the district’s 46 elementary schools and a cultural enrichment specialist would be hired to work with Native TPS students across all grades.