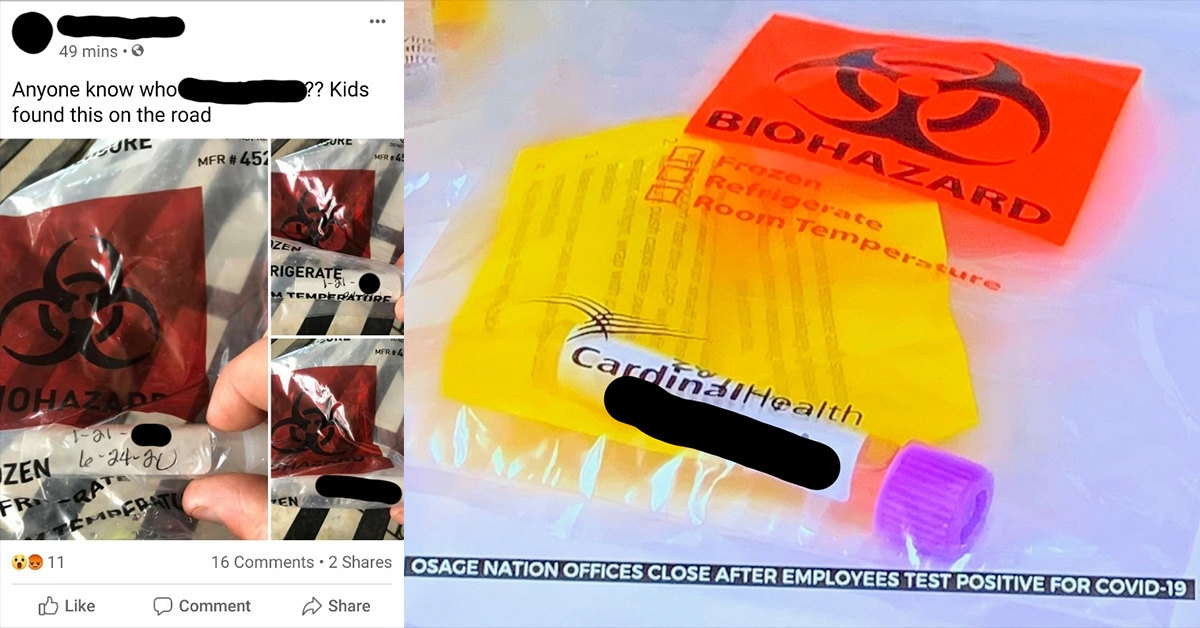 Photo caption: In the photo on the left, a Facebook post shows a photo of a biohazard plastic bag containing a COVID-19 testing specimen from the WHC with the patient’s name listed on the specimen’s sticker label. The individual said children found the bag on the side of the road. In the photo on the right, Tulsa TV station News on 6 ran a story with the station’s camera footage including a COVID-19 testing tube with a label containing the patient’s name visible on the image. Osage News

As of June 22, the Wah-Zha-Zhi Health Center in Pawhuska has conducted more than 1,500 COVID-19 tests in screening individuals for the coronavirus.

Before the June 24, COVID-19 testing event held in Fairfax in collaboration with the Osage County Health Department, the WHC reported a total of 1,255 diagnostic nasal tests conducted by clinic staff with the swabs sent out for processing. In addition, the WHC also conducts ID-NOW rapid diagnostic tests processed by WHC laboratory staff with that testing total reported at 291.

With totals for those testing types combined, the WHC has conducted 1,546 diagnostic tests, the WHC reported in a June 25 Facebook post. “We reached out to the Osage County Health Department as they have been an excellent collaborating partner assisting us with our previous testing efforts. We both understood that coming together to conduct this cross-jurisdictional effort would result in having an even larger positive impact for our communities by increasing the demographic/number of people we can test. The Osage County Health Department provides COVID-19 testing to all non-Tribal people (non-beneficiaries of IHS) while ONHS WahZhaZhe Health Center provides COVID-19 testing to all Tribal people (beneficiaries of IHS).”

Laura Sawney, Chief Operations Compliance Officer for the WHC and Osage Nation Health Services, said a total of 86 nasal swab tests were completed in Fairfax. Also that day, a total of 79 antibody tests were completed by venipuncture to obtain blood samples, she said. The antibody tests detect antibodies in the blood to determine if the individual has previously been infected with COVID-19.

As for future community testing opportunities, Sawney said the next COVID-19 testing event is slated for July 8 at the ON Wah-Zha-Zhi Early Learning Academy, Hominy location. Sawney said clinic officials will canvas the WELA building during the June 29 week before sending out promotional flyers.

In early June, Tulsa TV station News on 6 reported on the ON government office closure implemented due to the June 1 Election Day potential exposure to COVID-19 at the candidate campsites held in the campus park. While the TV news crew visited the WHC, the station’s camera footage included a COVID-19 testing tube with a label containing the patient’s name visible with the video paused/ frozen on the image.

The News inquired with the WHC once learning of the incident and Dr. Ron Shaw, CEO and Chief Medical Officer, responded in a June 26 statement.

“Recently, a Tulsa News Channel 6 story highlighted the recent closing of the Osage Nation after the clinic found 6 positives in one day following a large funeral gathering and outdoor election event. The day Channel 6 came to visit Osage Nation campus to tape a news video segment, there was an image of an employee’s labeled test specimen tube that appeared in the video segment which was discernible with image freeze and magnification. Prior to that specific filming, all specimen bags were repositioned in an effort to protect patient confidentiality,” according to the statement. “The WZZHC apologizes to that individual for allowing that image to be filmed. We were unaware that someone’s identity was visible. The WZZHC was not able to view, edit or approve the final content of the news video segment after it was recorded. Upon discovering this had occurred, we immediately contacted News Channel 6, the reporter, videographer and editing team. This resulted in the video-segment being promptly deleted/removed from News Channel 6 website and news platform by 10 a.m. the next day.”

Shaw also stated: “Our process henceforth will prohibit filming of laboratory specimens or any other clinic area deemed high risk. In addition, an ‘ONHS Media, Communications and Marketing Policy’ is under development to assure a standard protocol is implemented during interaction with the media for the purposes of enhancing and protecting the reputation and delivery of services by the Osage Nation Health Services.”

On the same day of the Fairfax testing event, an individual posted photos of a biohazard plastic bag containing a COVID-19 testing specimen with the patient’s name listed on the specimen’s sticker label. The individual said children found the bag on the side of the road.

The News also inquired on this incident once learning of the photos posted to Facebook. The WHC statement addressed this incident in its Facebook post on June 25.

“In an attempt to be transparent with our patients and communities, we do want to note that there was an unfortunate but very unintentional mishap that occurred with a specimen being unnoticed then getting away from us. Nonetheless the specimen was and is our responsibility,” the WHC statement reads. “We will take full ownership of this mishap. We deeply and sincerely apologize to our patient and to the patient’s family for this unfortunate incident that occurred with the test specimen and the events that led to our patient’s identity being displayed on Facebook. We are diligently working to remedy this to the best that it can be remedied in that we will send one of our nurses to the patient’s home to collect another specimen to minimize any additional inconvenience for that patient if they wish to still be tested.”

Shaw’s statement to the News added: “The WZZHC has taken this matter to heart and thoroughly discussed all parameters of this issue with our Drive Thru Testing Team to learn from this incident and modify our procedures henceforth based on these findings. We deeply value your trust in us and will continue to work hard to assure we maintain that trust.”