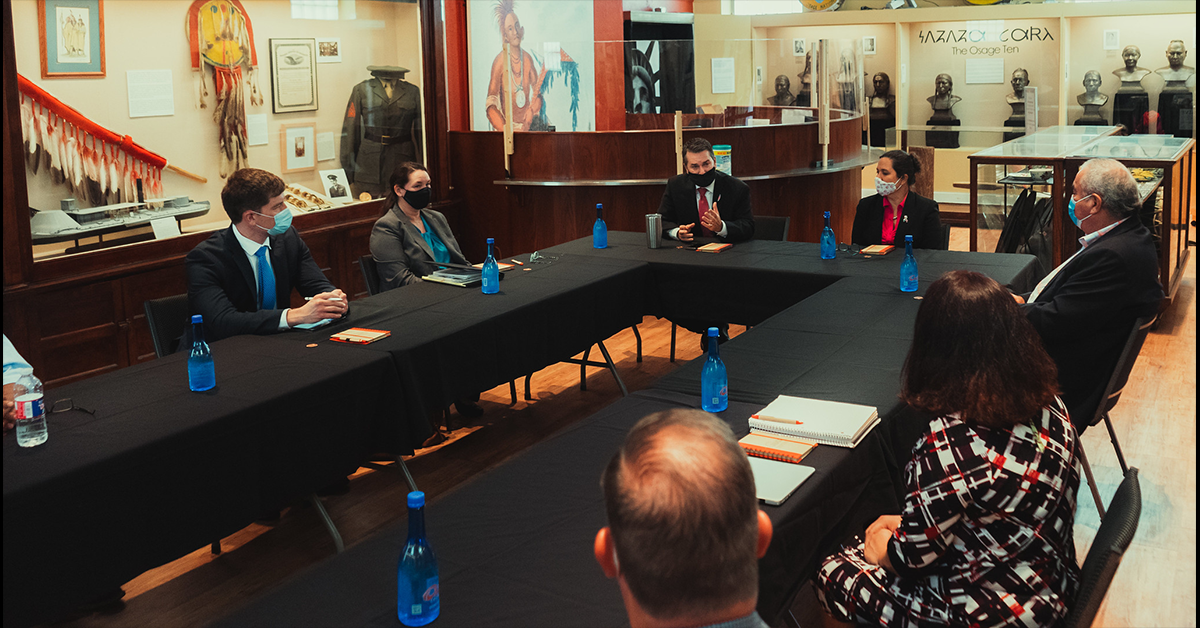 Osage and federal officials met Aug. 13 at the Osage Nation Museum to collaborate on how to address cases of missing and murdered tribal citizens.

“We want to make sure we’re not left behind and we are doing whatever we can to protect our people,” Speaker Angela Pratt said.

A 2018 study published by the Seattle Indian Health Board’s Urban Indian Health Institute ranked Oklahoma 10th nationally for the number of cases of missing and murdered Indigenous women, but also acknowledged that due to the dearth of data and uneven reporting practices, the numbers are “likely an undercount.”

The study also excluded cases involving missing and murdered Indigenous men and boys, who are impacted at even higher rates in some states.

Multiple bills specifically targeting Oklahoma’s rate of missing and murdered Indigenous people were introduced during the state legislature’s 2020 session but with COVID-19 upending and eventually abbreviating the proceedings, none made it to Gov. Kevin Stitt’s desk.

“This won’t just go away,” Principal Chief Geoffrey Standing Bear said. “Ignoring it is not an answer.”

Earlier this year, the Department of Justice provided funding for Cherokee Nation citizen Patti Buhl to work as an MMIP case coordinator. Although she is primarily working with Oklahoma’s three U.S. Attorney’s Offices, the position has her helping federal prosecutors in Kansas and Nebraska as well. The position is only funded for one year, but efforts are underway to secure more money to extend its lifetime.

Acknowledging the sizeable Osage diaspora outside of Oklahoma, Buhl reassured Principal Chief Standing Bear and other attendees that she and the 10 other MMIP case coordinators nationwide are in constant communication in an effort to maximize their offices’ resources and contacts.

“We haven’t had a case overlap yet, but we know we will at some point,” she said.

However, Buhl’s position is not a law enforcement role and in light of the Supreme Court’s ruling in McGirt, the U.S. Attorney’s Office for the Northern District is still shorthanded. Since early July, more than 60 cases and counting have been referred to the federal judicial system that would normally be prosecuted by the state of Oklahoma.

Reinforcements are on the way from other U.S. Attorney’s Offices around the country, but U.S. Attorney Trent Shores still expressed concern about his office’s ability to fulfill its obligations to Native and non-Native communities across the Northern District.

“We’re used to doing more with less in Indian Country, but this is much, much different in a post-McGirt world,” the Choctaw Nation citizen said.