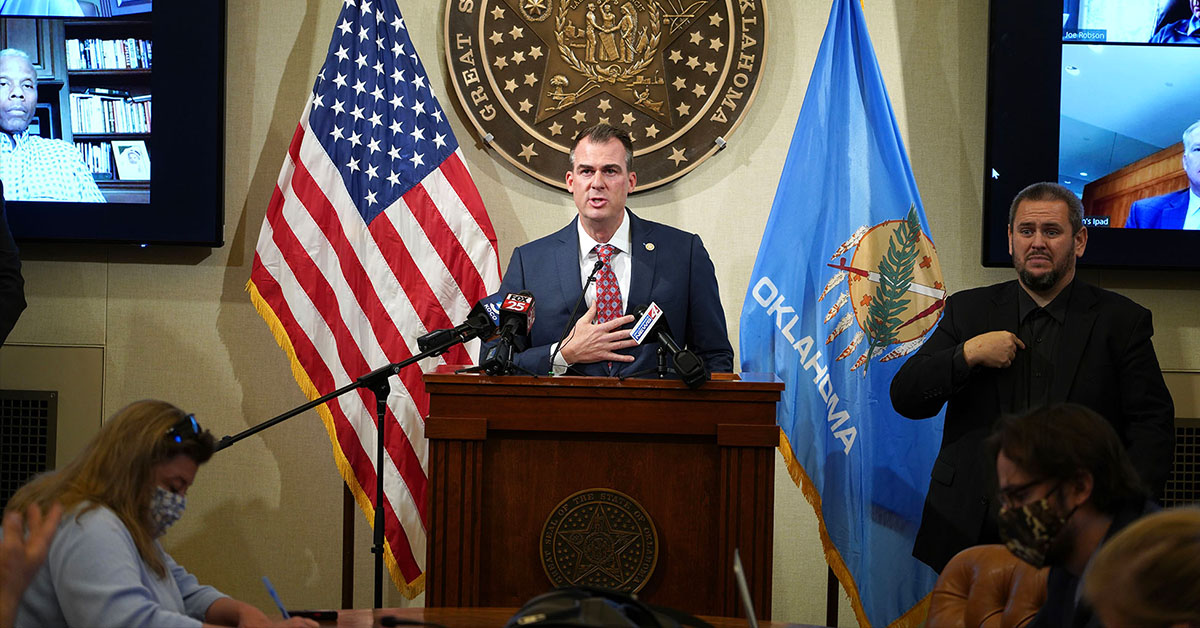 OKLAHOMA CITY — Along with Gov. Kevin Stitt, the Oklahoma Commission on Cooperative Sovereignty is calling for a single state of rules to be extended to all Oklahomans.

At an Oct. 22 press conference, the Oklahoma Commission on Cooperative Sovereignty presented its recommendations on how the state should move forward in light of the U.S. Supreme Court’s ruling earlier this year that the Muscogee (Creek) Nation’s reservation is still intact.

Acknowledging that there are still unanswered questions regarding the ruling’s impact on non-criminal matters, the commission listed five principles in its report to “ensure we remain one Oklahoma.”

Although the recommendations include supporting tribal sovereignty, it also includes language calling for all state laws and regulations to be applied unilaterally to all Oklahoma residents and businesses, regardless of geography.

Despite the governor’s repeated claims that the same rules should also apply to everyone regardless of race, federal courts, including the U.S. Supreme Court via the 1974 ruling in Morton v. Mancari, have held that tribal citizenship is a political classification rather than a racial one.

“Can you imagine what would happen over the next 113 years if we had 39 different sets of rules?” Gov. Stitt asked rhetorically, referencing the number of federally recognized tribes headquartered in the state.

A full copy of the 3.5-page report is available online.

The commission was formed in July after the U.S. Supreme Court ruling in McGirt v. Oklahoma, which held that at least with respect to criminal cases, the Muscogee (Creek) Nation’s reservation was never disestablished, thus eliminating the state’s jurisdiction over criminal matters involving tribal citizens within those boundaries.

With that ruling as precedent, cases are still pending before the Oklahoma Court of Criminal Appeals regarding the status of the Cherokee, Chickasaw, Choctaw and Seminole reservations as well.

Along with a former member of the state’s Congressional delegation, the commission includes representatives from the state legislature, the energy industry and the agricultural community. Although it was formed in response to a decision about tribal sovereignty and charged with reaching out to tribal officials, the commission does not have any Indigenous members. When asked about it at the press conference, Gov. Stitt pointed to his Cherokee citizenship as sufficient representation.

“I set this group up … to represent what the future looks like for the state of Oklahoma,” he said.

The McGirt ruling was specifically focused on criminal matters. However, questions have since been raised about the state of Oklahoma’s taxation authority. If the McGirt ruling is extended to include taxation matters, the Oklahoma Tax Commission issued a report in early October estimating an annual revenue loss of at least $21.5 million just from income tax the state would not be legally allowed to collect from Muscogee (Creek) Nation citizens who live within the boundaries of their tribe’s reservation.

The Oklahoma Tax Commission projects that the state would lose at least an additional $38.1 million in sales and use tax revenue from purchases made by Muscogee (Creek) Nation citizens within the reservation’s boundaries.

Commission Chairman Larry Nichols acknowledged at the press conference that there is still uncertainty about what impact, if any, the ruling would have on taxation. However, that did not stop him or Gov. Stitt from calling on the state’s federal delegation to pursue legislation rather than considering compacts.

“Compacts are certainly an option,” Stitt said. “There are other things that Congress could do, though. Compacting with each individual tribe is problematic.”

That potential lost revenue prompted calls at the press conference for all Oklahomans, including tribal citizens, to share equally in funding public services with schools and roads specifically highlighted as examples.

In 2019, the Oklahoma legislature appropriated $3 billion to the formula used to calculate state aid for public education. Of that, $130 million came from tribal gaming exclusivity fee payments.

That figure does not include contributions from other tribal funding sources, such as the sale of car tags, or donations to individual school districts, such as the $6,630 from Osage Nation’s Johnson-O’Malley program to buy school supplies for Indigenous students enrolled at Pawhuska Public Schools.

With respect to roads, tribes have invested more than $200 million in highway improvements across Oklahoma since 1980 as per a study produced by the Oklahoma Native Impact Report.

The governor equivocated on whether he supports disestablishing reservation boundaries and said that was a decision for the federal government to make.

“All those things are on the table for the federal delegation,” he said. “I can’t fix this myself. That is why the commission came together to present these findings to our friends and our federal delegation here that represent Oklahoma.”