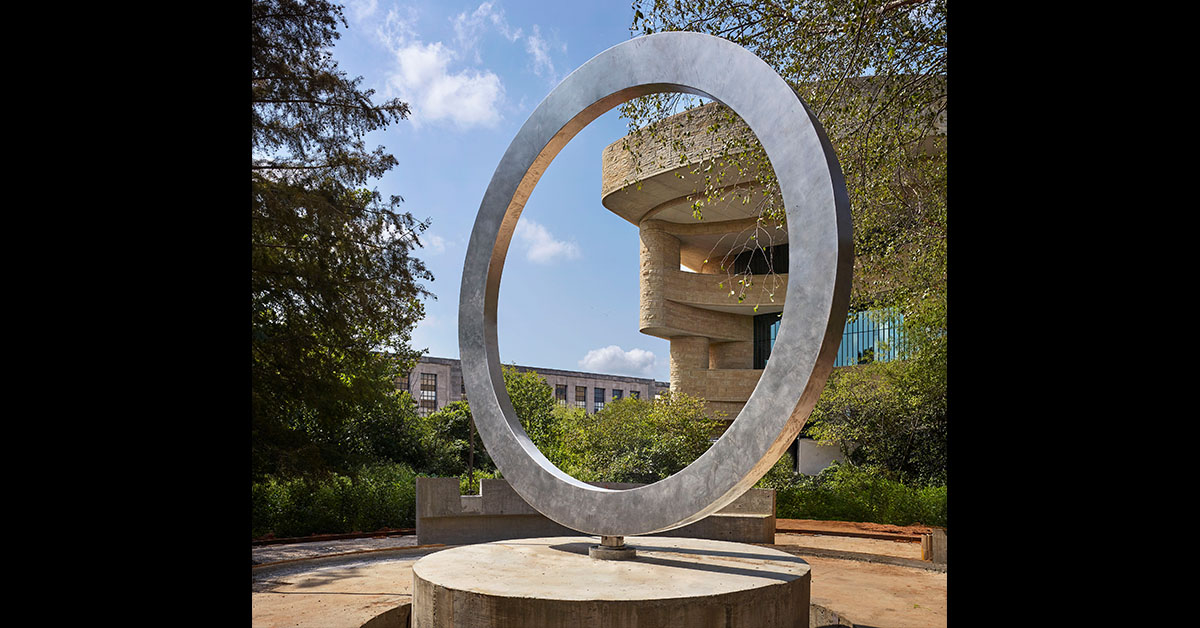 The National Native American Veterans Memorial opened in Washington, D.C. on Veterans Day, Nov. 11, and the public was invited to attend via a virtual ceremony. The ceremony honored the service of military veterans, their families and to commemorate the memorial completion.

Located outdoors on the grounds of the Smithsonian National Museum of the American Indian, the Native American Veterans Memorial comprises a stainless-steel circle placed over a carved stone drum and includes water features and benches surrounding in a circle pattern for visitors to gather, remember and reflect.

Its designer is Marine Veteran Harvey Pratt (Cheyenne and Arapaho Tribes of Oklahoma), whose work was selected from 120 submitted designs reviewed by a juried group, according to the NMAI website on the memorial. Efforts to fundraise for costs, design and build the memorial launched following legislation passed in 2013 by the U.S. Congress clarifying provisions of the previously passed Native American Veterans Memorial Establishment Act of 1994.

Construction on the $15 million monument took about one year, according to a Voice of America article, which added the 2013 clarifying bill allowed the NMAI to raise funds for construction costs from private donors, including individuals, organizations and Native nations.

“The National Native American Veterans Memorial will serve as a reminder to the nation and the world of the service and sacrifice of Native American, Alaska Native and Native Hawaiian veterans,” Kevin Gover, NMAI director said in a statement. “Native Americans have always answered the call to serve, and this memorial is a fitting tribute to their patriotism and deep commitment to this country.”

Mandy Van Heuvelen (Mniconjou Lakota/ Cheyenne River Sioux) interviewed Pratt in a YouTube video posted by the NMAI where she manages cultural interpretive programs in May 2020 regarding his monument design.

At the encouragement of a fellow C&A veteran, Pratt submitted his memorial design for consideration during traveling meetings seeking design submissions held in Oklahoma. “The next morning, after I had dreamed about it, I got up, went downstairs and I got some paper and I made some sketches of what I thought the memorial should be and I was trying to figure out how you can get 574 federally-recognized tribes to agree to something without naming one particular tribe or any names,” Pratt recalled. “And I thought the way to do that is through ceremony and the spirituality of Native American people and so that’s how I incorporated the concept of elements of wind and the fire and the water and the Earth in ceremonies. We all have places where you go to have ceremonies, you go to church, there’s special places on this Earth that Indians go to – into the mountains and into the valleys – and so I thought it has to be some place you go to, it has to be a destination and that was my general concept of the design that you had to go to and not just walk through.”

The NMAI description of the memorial reads: “The focal point of the memorial is a large, vertical stainless-steel circle, sitting atop a low, carved stone drum form, at the center of a circular gathering space. Water flows continuously outward from the center of the drum, and a fire may be lit at the base of the steel circle on ceremonial occasions. A circular seating area may be entered at the four cardinal directions from a surrounding walkway called the Path of Harmony, respecting different cultural practices regarding the appropriate direction from which to enter the central space. There are four vertical spears or lances where visitors may leave prayer ties. The seals of the five branches of the armed forces are on a nearby wall.”

Admission to visit the memorial is free, as well as admission to the NMAI, which is allowing a limited capacity of visitors into the museum due to the COVID-19 pandemic.

The Nov. 11 virtual ceremony can be viewed on the NMAI’s YouTube channel and more information is available at: https://americanindian.si.edu/visit/washington/nnavm