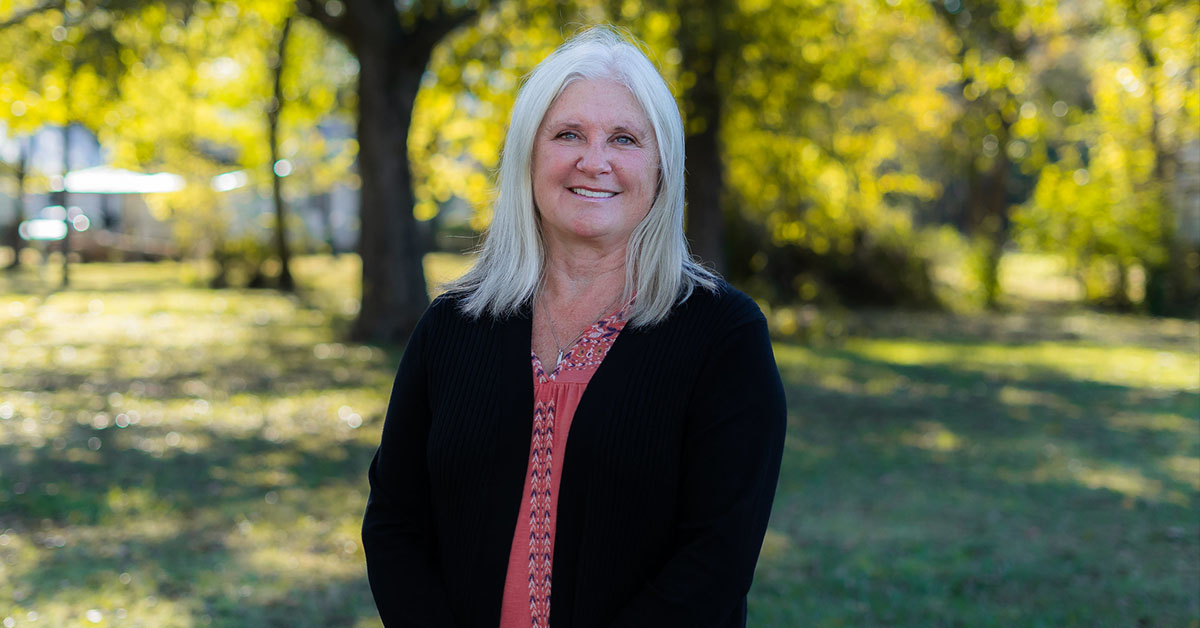 Photo caption: Jacque Boulanger pictured standing in front of one of 11 Pawhuska city lots she donated to the Osage Nation on Oct. 30, 2020. CODY HAMMER/Osage News

When Jacque Boulanger moved back to Pawhuska nine years ago, she noticed the town had seen better days.

She bought a house on the east side and began looking around at the local neighborhoods. She said it was a very different Pawhuska than what she grew up in. There were vacant lots overgrown with trees and brush, there was a lot of debris, and the structures were not being maintained.

That’s when she decided to do something about it. She bought them.

“When I came back here and saw that, I knew I would be doing the city good, and I would feel good. There is a thing about just doing good,” she said. “I mean, I grew up here on the reservation and Pawhuska used to be so beautiful and everyone took care of things. That’s how I remember it, anyway.”

Over time, she ended up buying 21 Pawhuska city lots. The property taxes on the lots ranged from $19 to $30. It didn’t break the bank to own them, she said. She cleaned them, mowed regularly, and maintained any structures. At one time she wanted to make sustainable neighborhoods and plant pecan trees and fruit trees on the lots and do some other initiatives for the residents, but the city of Pawhuska didn’t want to work with her.

A longtime artist, Boulanger lived in Tallahassee, Florida, for 30 years. She moved back in 2011 to help take care of her mother after her father passed away. She previously worked as a clerk for the Osage Nation Congress, but now works at the Bureau of Indian Affairs in the oil and gas leasing office.

After almost a decade of maintaining the lots, she grew tired of the upkeep and decided to sell a few. She also gave some away to friends, but she always knew she would give the bulk to the Osage Nation.

“I always knew in the end I would, and I told my daughter that when I die, this is going to the tribe. She was cool with it and she didn’t care, she thought I was crazy for doing it anyway,” she said with a laugh. “But it kept me active and I enjoyed doing it.”

On Oct. 30, she made it official and met with Principal Chief Geoffrey Standing Bear and Melissa Currey, Real Estate Services director for the Nation. She signed over the lots to the Nation and that was that.

“It is a generous gift,” Standing Bear said. “We thank her for her contribution to restoring our diminished land base. Land is necessary to defend and advance our status as a sovereign nation.”

He said that Currey and her staff will plat the lots to show their size, their boundaries, nearby streets and flood zones. Once that work is complete the Nation will then decide the next steps.