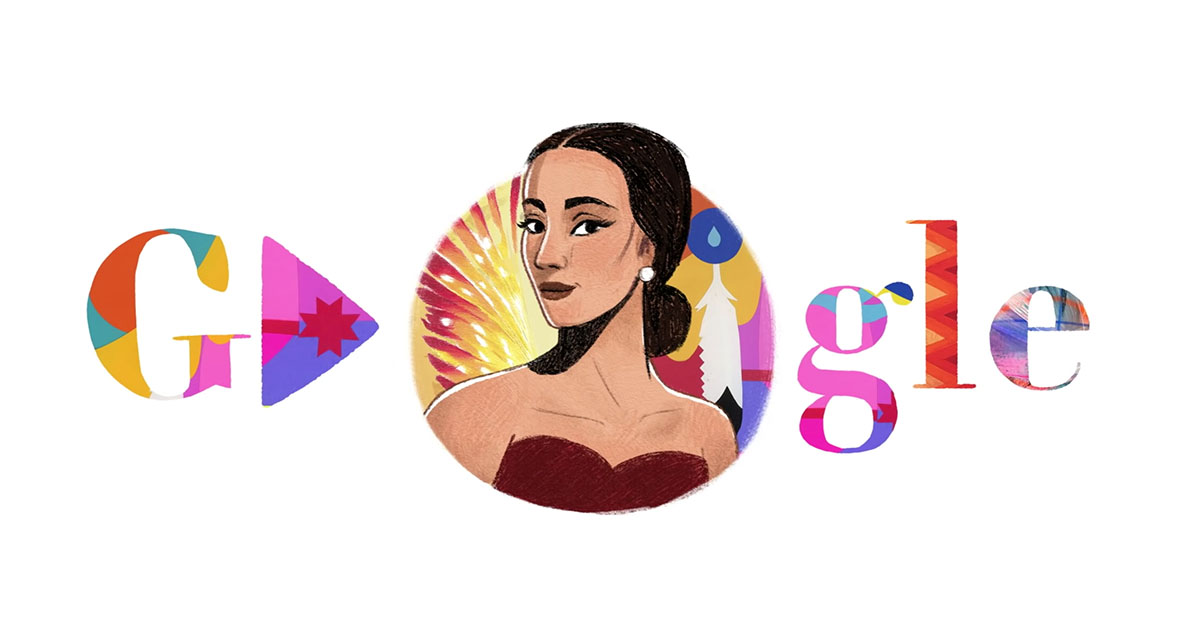 In celebration of Native American Heritage Month, Google honored the late Maria Tallchief with a Google Doodle. People from across the world visited Google on Nov. 14 and enjoyed a video of Tallchief dancing to a backdrop of Osage artwork.

“My mother transformed the world of ballet as America’s first Prima Ballerina. Thanks to her own mother’s vision and determination, she and her sister Marjorie studied and excelled at ballet from an early age,” said Tallchief’s daughter, Elise Paschen in the Behind the Doodle. “The young girl from Fairfax, Oklahoma lit up the stages around the world with her brilliant artistry. My mother’s discipline and genius allowed her to embody the American dream.”

The Doodle is set to the music of “The Nutcracker,” “Firebird” and “Swan Lake,” three of Tallchief’s most famous ballets. The backdrops of each scene of the Doodle follow her career from a child growing up in Fairfax, to a young girl studying ballet in Los Angeles, to a young woman dancing in New York City. Each backdrop for the scenes of Tallchief dancing were created by the Osage artists. As she dances across the screen, their artistry compliments her grace, athleticism, and the strength of her Osage heritage.

Each scene is segued with words from Tallchief: “From your first plié you are learning to become an artist. In every sense of the word, you are poetry in motion. And, if you are fortunate enough ... you are actually the music.”

A Google Doodle is when Google changes its logo on its homepage to celebrate “holidays, anniversaries, and the lives of famous artists, pioneers, and scientists.” The demand for Google Doodles is handled by a team of illustrators and engineers called the “Doodlers,” according to Google. The team has created over 4,000 Doodles for the homepage since 2000.

“A group of Googlers get together regularly to brainstorm and decide which events will be celebrated with a Doodle. The ideas for the Doodles come from numerous sources including Googlers and Google users,” according to Google. The team receives hundreds of requests every day.

To propose an idea for a Google Doodle, the team accepts ideas via email at doodleproposals@google.com.

Tallchief is considered America’s first prima ballerina. She died in 2013 at the age of 88. The daughter of Alex and Ruth Tall Chief, her early life was spent in Fairfax, Oklahoma. At a young age she trained in Los Angeles and then moved to New York City when she was 17. She made it to the Ballet Russe de Monte Carlo, where she danced from 1942 to 1947. But it was her role with the New York City Ballet from 1948 to 1965 that she is most remembered for. She was the first American to dance at Moscow’s Bolshoi Theater and the first American to dance with the Paris Opera Ballet.

She starred in George Balanchine’s “Firebird,” which was choreographed just for her and catapulted her career in 1949. She was the first Sugar Plum Fairy in Balanchine’s 1952 original production of “The Nutcracker.” She also starred in “Orpheus” and “Scotch Symphony,” among many others.

She later served as artistic director for the Lyric Opera Ballet in Chicago and later founded the Chicago City Ballet, of which she was also the artistic director. She has been inducted into the National Women’s Hall of Fame, she has received a National Medal of Arts, and in 1996 she was one of five recipients of a Kennedy Center Honor for lifetime achievement for her contribution to American culture, where legendary ballet dancer Mikhail Baryshnikov paid tribute to her.

Tallchief is among the first group of honorees to be inducted into the National Native American Hall of Fame.

“My mother took great pride in her Osage heritage. She received the highest honor in 1953 when she was named Princess of the Osage Nation and given the title Wa-Xthe-Thon-ba, Two Standards,” Paschen said in the Behind the Doodle. “She said her Grandma Tall Chief selected her name: ‘By choosing it she was saying that, while I was a ballerina with an important career on the stage, I was also her grandchild, an Osage woman and a daughter of the tribe.’”

To watch the Google Doodle of Maria Tallchief visit https://www.youtube.com/watch?v=AWXvClaRtsI

To watch the Behind the Doodle: Celebrating Maria Tallchief, visit https://www.youtube.com/watch?v=kHEjSnVLGXE