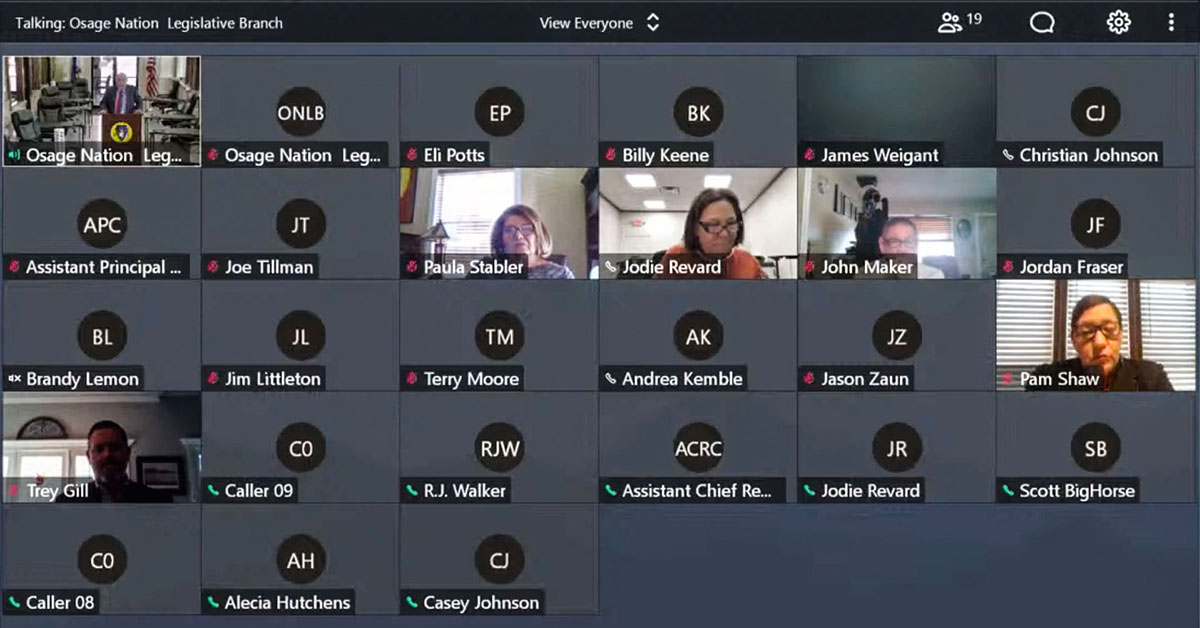 The National Native American Veterans Memorial opened in Washington, D.C. on Veterans Day, Nov. 11 and the Osage Nation is now among several tribal nations and entities who contributed to the project.

On Nov. 24, the Seventh ON Congress unanimously approved a $100,000 contribution “to the (Smithsonian) National Museum of the American Indian for the National Native American Veterans Memorial” in bill ONCA 21-04 (sponsored by Congressional Speaker and Army veteran Angela Pratt). The funding will come out of the Nation’s general fund which will go toward project costs of the memorial located on the NMAI grounds at the National Mall.

“We have countless Osage veterans and this is long overdue in our Nation to include a Native American veterans memorial,” Pratt said during a Nov. 17 Congressional Cultural Committee meeting. “I want and hope Osage can be a part of it,” she said, adding the proposed contribution received a letter of support from Principal Chief Geoffrey Standing Bear and his administration officials who are military veterans.

Pratt said she has been in contact with NMAI officials for years after attending an initial meeting where she gave feedback on ideas for the memorial concept before the design and construction efforts started. Due to the COVID-19 pandemic, fundraising efforts were impacted, so the deadline for contributions was extended. As part of making a contribution, the Nation’s seal will be included at the memorial with other respective tribal nations and individuals who also donated, she said.

The Native American Veterans Memorial comprises a stainless-steel circle placed over a carved stone drum and includes water features and benches surrounding in a circle pattern for visitors to gather, remember and reflect.

“This tribute to Native heroes recognizes for the first time on a national scale the enduring and distinguished service of Native Americans in every branch of the U.S. military,” according to the NMAI website. “A distinguished group of Native and non-Native jurors unanimously selected the design concept Warriors’ Circle of Honor by Harvey Pratt (Cheyenne and Arapaho Tribes of Oklahoma) from among more than 120 submissions. Pratt (a Marine Corps veteran who served during the Vietnam War) is a self-taught artist whose works include themes of Native American history and tradition and the Cheyenne people.”

Cultural Committee Chair and Congressman Scott BigHorse said he supported the bill and memorial, noting Osage families, including his, have generations of veterans who served in past wars. “Our (Osage) veterans were also recognized as Code Talkers in World War I,” BigHorse said referring to the commemorative coins issued in November 2013. That year, 33 gold medals were awarded to those tribes whose members served in World War I and II and used their native languages as code to relay radio messages to fellow soldiers during battle as part of fulfilling the Code Talkers Recognition Act of 2008.

Also during the special session, Congress unanimously passed a separate appropriation bill (ONCA 21-05 sponsored by Pratt) providing a $1.3 million supplement to continue funding the Nation’s CARES Act Direct Assistance program through its Nov. 30 deadline for applications. On Nov. 17 when the special session commenced, Standing Bear told Congress the federal CARES Act funding reserved for the direct assistance program (providing up to $1,200 to each approved Osage applicant) is depleted and his administration estimated $1.3 million would be sufficient to fund remaining direct assistance applications through month’s end.

On Nov. 25, Standing Bear issued an executive proclamation for the next special session slated to start Dec. 15 at 10 a.m.