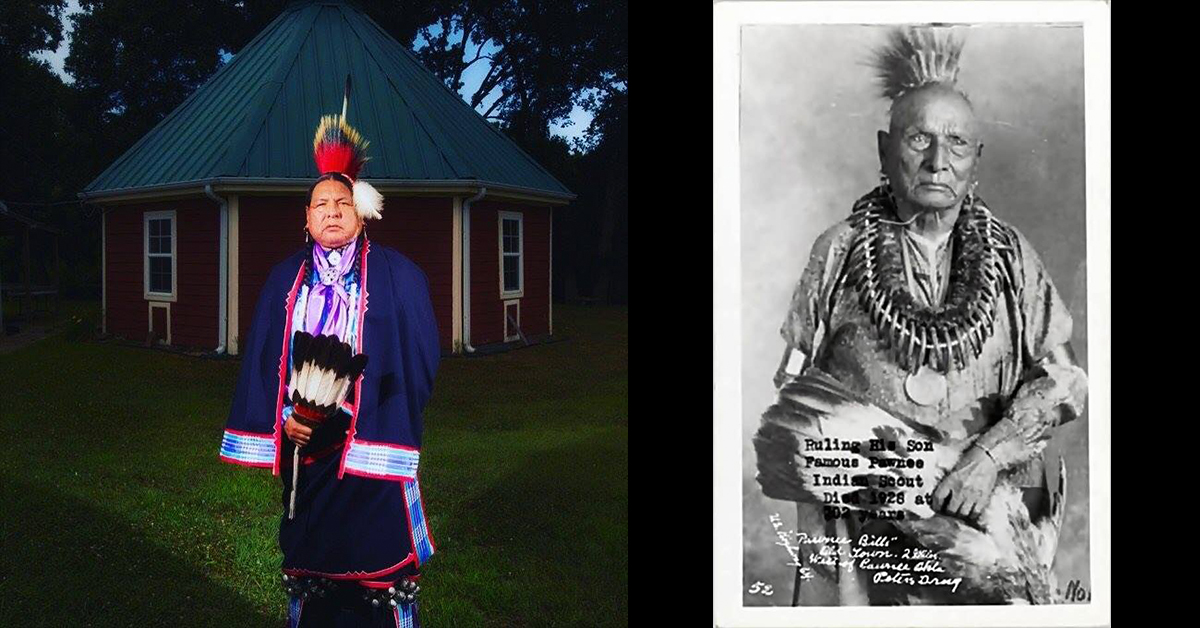 A change in name brings peace, comfort and understanding

For years, the name Richard “Ricky” Eaves has been called out in dance arenas across Indian Country.

A longtime fixture on the Powwow Trail and a respected tail dancer for the Osage Inlonshka for the WaXaKoLi District, Ricky Eaves is widely known in Native American circles. So, it took many by surprise when he announced via social media that he was embracing his Indigenous identity and changing his name to Richard Lookout RulingHisSun.

What many don’t know, was that at 59 years old, he was making peace with his Osage and Pawnee ancestry and hoping that others would also embrace their Indigenous identities.

RulingHisSun is half Osage and half Pawnee, making him full blood Native American. His mother, the late Dora Armeda Lookout, was full blood Osage. His father, the late Wilbur Tommie Eaves Jr., was full blood Pawnee. He explained that his Osage and Pawnee upbringing has not always made his life easy, especially in his younger years. He was raised by his full blood Osage grandparents, Henry and Dora Lookout, and he is the great-grandson of Chief Fred Lookout. He said when he was growing up, Osages disliked Pawnees, and Pawnees disliked Osages. Add on to that, the Osage are a patriarchal society and some Osages would only recognize him as Pawnee.

“I was feeling bad one day and my dad said that we come from a Chief family on the Pawnee side and his name was Ruling His Sun. That was my great-great-grandfather. He made the journey from Nebraska when the Pawnee were moved,” he said. “He was a scout but throughout his life, Pawnees have different names for different times of their lives. If they do something throughout their life that’s heroic or brave, then they changed their name. So, over the course of their lifetime, they may have three or four names.”

He said that when Ruling His Sun, which has various spellings but he is choosing to write it as one word RulingHisSun, came from Nebraska his name was Fox Chief and that was the name he went by when he was a scout. He also had the traditional name of Tansi, that when translated meant Osage. He also found an interview the U.S. government conducted with Ruling His Sun in 1928. The interview was about a discrepancy in his government pension from having served as a scout. In 1923, a U.S. Congressman wrote to the pension office on behalf of Ruling His Sun. When the pension office failed to award Ruling His Sun his wages, the Congressman then sponsored Resolution 4283 that said Ruling His Sun should be regarded as an Indian War Soldier and therefore be granted a pension of $20 a month. On Dec. 8, 1924, the resolution passed.

He and his longtime companion, Carrie Wilson, began researching more into his ancestry and found that when Ruling His Sun’s oldest son went to boarding school, his name was changed to Charlie Eaves.

During the eras of assimilation and termination, Native Americans were taken to boarding school, were taught farming and housework, were discouraged from speaking Osage or practicing Osage ways, and as part of the assimilation transition, were given English names, said Terry Mason Moore, Osage attorney and historian.

Dr. Robert Warrior, Osage scholar and Hall Distinguished Professor of American Literature and Culture at the University of Kansas, said he agrees with Mason Moore.

“Our history, I find it important to say, includes the times and circumstances through which our ancestors stopped being free to use their clan names and began adopting names from the English-speaking world. Some people adopted those new names when they were baptized, others through intermarriage or just moving away. Along with churches, schoolrooms were often places where Native American people received new names,” he said. “A standard practice among teachers working among Native people was to list names of presidents of the United States on a blackboard and assign names to the boys by going down the list—George, John, Thomas, James, Andrew, Martin, William, and so on. I don’t know how much that happened among Osages, but it seems to have happened regularly in a lot of places, especially at boarding schools.”

Warrior said he admires RulingHisSun’s choice to honor his ancestry.

“I share my first name, last name, and clan name with my great grandfather, Robert Edward Warrior Sr., and my first and last name with my grandfather, Robert Edward Warrior Jr.,” he said. “When I listen to or sing my grandfather’s song from the Grayhorse War Mothers dance, I honor not just the life he sacrificed as a member of the US Armed Forces who was killed in action in Normandy in World War II, but also honor his name by singing it, the language that his name comes from, and the people who hold his name and continue to strive to imagine the world in the way that is unique to us as Osage people.”

RulingHisSun reached out to Mason Moore for help in changing his last name and found out the process was relatively simple.

Mason Moore said the process does not require an attorney and the paperwork includes a Petition, Verification, Notice and Order. The forms can be obtained from a court clerk’s office and there are free forms and instructions from the Oklahoma County Bar Association Legal Aid Committee available at https://eforms.com/name-change/ok/#AdultNameChange

RulingHisSun went to the Pawnee Nation Tribal Court and filled out all the necessary paperwork in September, but due to the pandemic, the process was slowed down and took months instead of weeks. In mid-December, he heard back from the Social Security Office and received his order for the name change. He said he will receive his new social security card the beginning of January. Then, he will be able to obtain a new driver’s license and it will be official.

“I’ve already talked to three or four Pawnees and they have Christian names they would like to get changed back,” he said. “I told them it’s relatively simple, it’s just time-consuming.