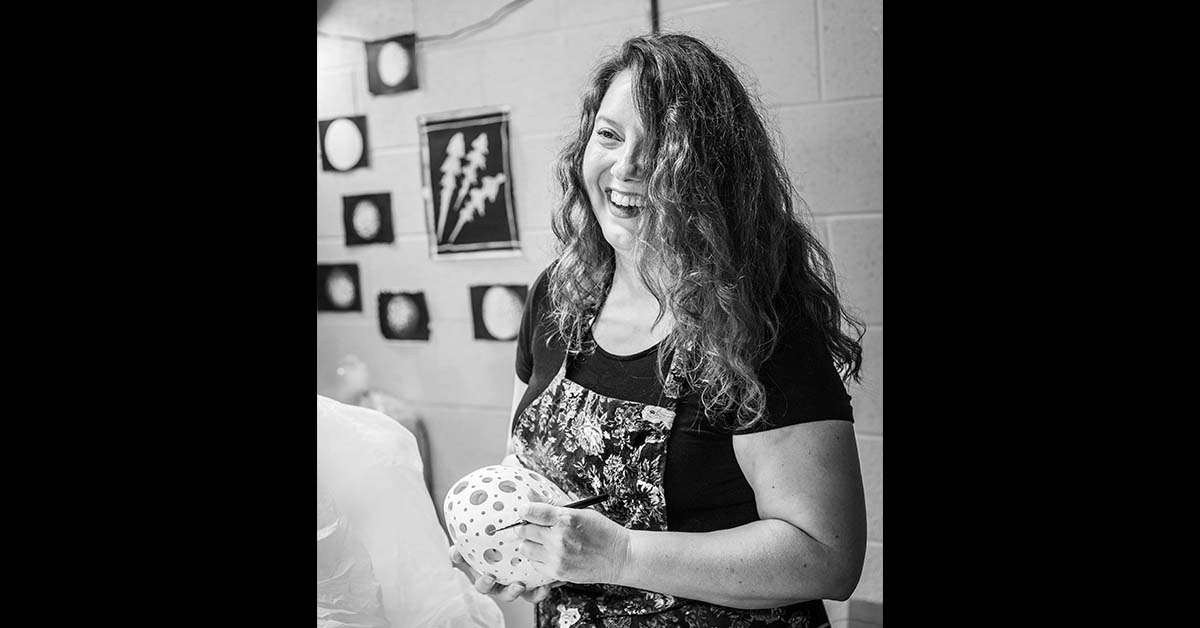 Once artists start engaging in creativity, they just want to stay in that space.

Jarica Walsh, Osage artist, curator and arts administrator said, “You realize ‘oh, this is what I should be doing.’”

Born in Pawhuska, Walsh moved to Norman, Oklahoma, at an early age and attended the University of Oklahoma as a film studies major. Although the arts were highly respected in her household, a career in the arts was not a common topic.

“Growing up, there was a lot of attention on the arts and creativity, but there was never an acknowledgment of that being a career,” she said. “I went into college not really knowing what I wanted to do.”

During an extended pause from her studies, Walsh supported her father with his business and even started her own, but ultimately, decided to return to school.

“In 2013, I realized I wanted to be a college graduate - I wanted to have that degree,” said Walsh, noting that the Osage Nation Higher Education Scholarship was critical in the pursuit.

When she returned to finish her degree, she quickly found her way into a creative community and her passion for the arts was ignited. An internship at the Oklahoma Visual Arts Coalition supported her artistic drive, but this time with a greater focus on arts administration.

“I got sold at that point,” she said. “I realized my life could be really meaningful if I do this work. Being in the position to create opportunities for artists, help people see the way to make their careers work, and provide them with the resources – just having the knowingness of how to create their portfolio materials, how to write a grant application, what exhibitions to look for – things like that were really exciting to me.”

After completing her internship, Walsh accepted a full-time position at OVAC before transitioning to her current position as Director of Art in Public Places for the Oklahoma Arts Council in 2019. According to their website, the Oklahoma Art in Public Places Act, signed into law in 2004, requires that eligible state capital improvement projects have 1.5 percent of their budgets invested in public art that represents the history and values of the state. Walsh manages that 1.5 percent.

“I’m definitely looking at ways to equip more artists, especially Oklahoma artists, to be able to create public art,” she said. “To understand how the process works and how they can have a small idea and turn it into something big.”

In addition to championing public art, Walsh maintains a studio in the Paseo Arts District in Oklahoma City: “I make art that strives to provide healing and progress, and that examines our relationship with ourselves, our planet, and our universe,” says Walsh’s artist statement.

In her ceramics practice, Walsh appreciates the symbolism that fragile objects can be strengthened by immense heat and pressure. Her Star Series (2017) is inspired by her Osage origins and how we are all powerfully connected. While making, she infuses each artwork with positive energy and goodwill.

“With the circles and shaping of the spheres, I’m putting all this energy into this object like a talisman and whoever it goes to live with can receive this energy,” explains Walsh. “That’s my idea. That’s what I’m trying to do.”

Although her work has consistently been centered around positivity and optimism, a healing aspect became more important in response to the widespread trauma felt by many after the 2016 presidential election.

“How do we move forward from that? It’s important to acknowledge it, but we can’t just stay there, right? We have to keep progressing and manage it,” she said.

Hope Flags (2020) is an on-going series that offers collective healing in direct response to the collective trauma our society is currently sharing. Originally on view at Elemental Coffee in Oklahoma City during September and October of 2020, the flags are back on view as part of the SEEING NOW exhibition at 21c Museum Hotel-Oklahoma City.

“I believe that these objects hold intentions,” explains Walsh. “Put in this good healing energy. Be under it and receive that.”

Looking ahead, Walsh is part of The Paseo Plunge Collective, an artist team creating a 560 sq. ft. ceramics mural at the Willa D. Johnson Recreation Center in Oklahoma City, along with artists Ebony Iman Dallas and Quiquia Calhoun.

As part of her on-going intention of connecting to and honoring her Wahzhazhe heritage, Walsh hopes to lean into food sovereignty research.

“I’m really interested in visiting gardens that are a source of power and a source of healing for our people to reclaim the foods that we should be eating,” she said. “I would love to create a set of the (Hope) Flags while visiting these sovereign gardens and engage some of that healing energy and power.”

To find out more about Walsh’s work, please visit www.jaricawalsh.com.