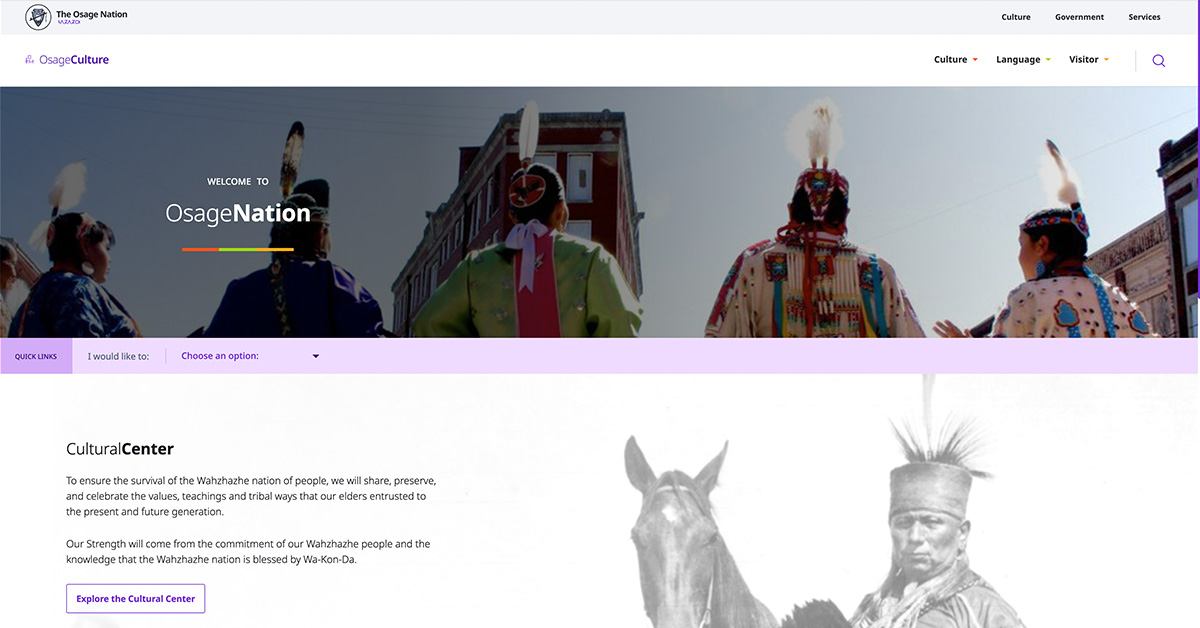 The employees of the Osage Nation Language Department and the WahZhaZhe Cultural Center have been hard at work finalizing details for the content of their new website, www.osageculture.com.

Thanks to 2020 federal funding available through the Coronavirus Assistance, Relief, and Economic Security Act, the two departments received approximately $945,000 for the preservation of language and culture.

Only given a few months to implement the funds, both departments came together to develop initiatives to bridge the gap from in-person learning to virtual. They have developed a podcast, Virtual Reality lessons, they held a laptop giveaway for distance learners, they loaded USB drives with language and culture lessons, they developed artisan kits to ship to Osages living outside reservation boundaries. However, one initiative still developing will perhaps be their best yet.

Working with Osage artist and graphic designer Ryan RedCorn of Buffalo Nickel Creative, they have developed more than 30 videos on language and culture to be uploaded for the viewing pleasure of Osages everywhere. The videos give a deep insight into Osage culture that normally isn’t openly discussed with the public and will be password protected due to its sensitive nature.

Other areas of focus on the website will feature an online dictionary, a media platform, tutorials and guides, as well as 55 lesson plans about language and culture that match K-12 curriculum, according to an Osage Nation press release. The site will also include content on Osage geography, classes, events and information to help future visitors.

“Our first season of the podcast will have 12 episodes that will address Language, Culture, Food Sovereignty, and Running,” said OJ Littlecook, Osage Language instructor. “This is an ongoing initiative and will be released on the new website coming early spring. It will be called ‘Wahzhazhe: The Official Podcast of the Osage Nation.’”

Littlecook said the Virtual Reality initiative will be released on the website in early spring and will feature the Trunks Collection from the Cultural Center. The trunks each contain items that follow a lesson plan that covers the Drum, the Cook, and traditional Games. He said Principal Chief Geoffrey Standing Bear requested the VR initiative be expanded. Littlecook said that will debut in late spring.

On March 26, Addie Hudgins, Cultural Center director, told the Traditional Cultural Advisors committee that she and her staff are still busy working with the Nation’s Information Technology department in approving photos and content that is to be uploaded to their new website.

Vann Bighorse, ON Language Department director, said he and Hudgins have been asked to make a wish list for projects they would like future funding for. In March, President Joe Biden signed off on the American Rescue Plan and tribes will receive $31 billion, with funds earmarked for the preservation of language and culture.

According to the Cherokee Phoenix, $20 billion will focus on combating COVID-19, one billion will be split evenly between the 574 federally recognized tribes and the remaining $19 billion will be distributed to each tribe using an undisclosed formula developed by the U.S. Treasury.