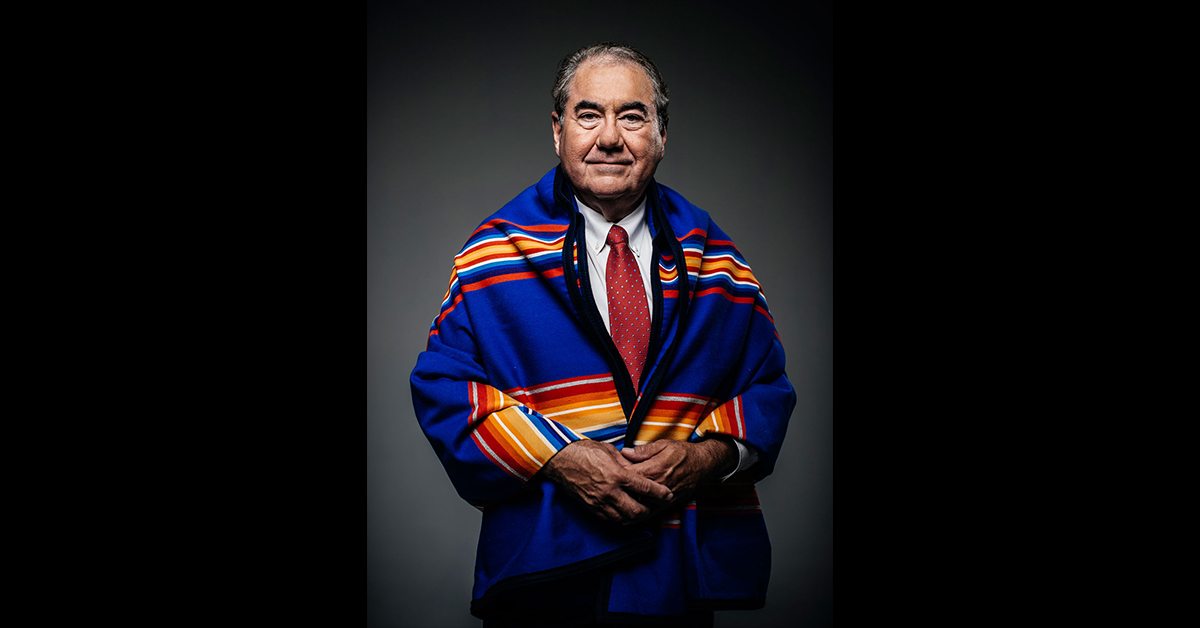 Available on YouTube, Standing Bear’s address is “To all the Osage people – 23,000 now – a long way from those days when we struggled to 2,229 in 1906. 2020 was a difficult year, 2021 has also been difficult mostly because of this COVID pandemic affecting the health of our people, but also the economic damage that it’s caused.”

“I’m proud to say that our Osage people have responded and we are beating the pandemic,” Standing Bear said referring to the ongoing work efforts by Osage health officials and employees of the Wah-Zha-Zhe Health Center and its management. “Our people are working hard to make sure we all have access to vaccinations. Many of our people have decided not to take the vaccinations for their own personal reasons. I have selected to take both vaccinations and I encourage those who have questions to call (WZZHC CEO Dr. Ron Shaw) and our clinic or consult with your own medical provider. If you can be here, we now have thousands of doses ready to administer.”

“Moving to the future, we have seen that our people have responded so well and the business of the clinic is so strong that we need to discuss creating a new Osage Nation healthcare system,” Standing Bear said. “In order to do this, I have been working with Congresswoman Paula Stabler, our (Health Authority Board), Dr. Shaw, attorneys, architects and others to grow our health system into a new facility with new capabilities. This process now allows the Osage Nation to consent to what we’re trying to do. A bill (sponsored by Stabler) was introduced for this next (Hun-Kah Session) beginning March 29 and we hope the Osage Congress will support the efforts we’re making.”

In the months before the COVID-19 pandemic reached Oklahoma, Standing Bear and Strategic Planning staff hosted several meetings with Osages in Oklahoma, Colorado, California, Texas and Kansas seeking input to update the Nation’s strategic plan. One request heard from Osages is for the Nation to open a community development financial institution, Standing Bear said. “We have now done our work and are now asking the Congress to act, to get the Nation fully engaged in this process or wherever you live in the United States, you can apply for a consumer loan for your house, for your own personal loans, for your vehicles and all your normal financial transactions. We hope the Congress approves this proposal in the next session,” he said.

Citing the pandemic and ON accounting personnel impacts, Standing Bear said the Nation’s 2020 fiscal year audit experienced delays and is underway. The FY 2019 audit was also delayed, but has since been completed, according to Congressional Appropriations Committee discussions earlier this year.

In a breakdown on Osage government expenditures in FY 2019, Standing Bear said most of that year’s expenses were health-related at $36.8 million and $18 million on education. He also noted the Nation spent $2 million on culture and language, which he describes as “cornerstones of us moving forward as a people unique from others – our Wah-Zha-Zhe language and our traditions are in danger and have been for decades. Our culture team and our language team and our schools are working against that tide of elimination to forward us into the future.”

For FY 21 revenue, Standing Bear said the Nation’s government projected revenue sits at $51 million with $46 million coming from the seven-Osage Casino Gaming Enterprise; $2.2 million from the ON Tax Commission; $2.5 million from department/ program income; $250,000 interest income; $5 million in restricted third-party income generated from the WZZHC; and $461,000 from the Treatment Alternative to Street Crime (TASC).

During the 2020 Tzi-Zho Session, the Congress approved the FY 2021 budgets with the Executive Branch planning to spend just over $48 million; The Congress/ Legislative Branch to spend $2 million; the Judicial Branch to spend 455,814; the Minerals Council to spend $216,547 and the three villages to spend $47,400 each, according to Standing Bear’s presentation, which total about $51 million.

“I can report that (the Gaming Enterprise) has informed me that the numbers for next year will be substantially higher from what they have been this year as we recover from the COVID,” Standing Bear said.

Standing Bear said the ON Ranch is growing on its own and the 2020 CARES Act funding invested in the 43,000-acre ranch “is making it grow faster. We have over 2,000 head of cattle, we have 100 head of bison and we have added 42 miles of new fencing.” The ranch also has a new industrial scale to weigh the animals and other CARES Act funding was budgeted for The Harvest Land (formerly Bird Creek Farms) in Pawhuska to increase food sovereignty “to feed ourselves,” Standing Bear said.

Standing Bear noted CARES Act funding was also used to build the meat processing plant in Hominy to also increase food sovereignty for the Nation. “This bison is feeding our children and our elderly as we have done for thousands of years,” he said.

Standing Bear referred to the Nation’s language and education endeavors, which includes Daposka Ahnkodapi (the Nation’s school). “When you see our children from the school in the grocery store in Pawhuska or at the dances, be prepared to respond to them in Osage because they will be talking to you,” he said.

For the Nation’s water rights, Standing Bear said “we have a top-notch legal team and engineering team in negotiations with the state of Oklahoma. During the Hun-Kah Session, Standing Bear said his office will announce developments involving the City of Enid accessing water out of Kaw Lake. “These kinds of battles take years, the best way to do it is to get your science and your law together and present it to the opposition … and then be prepared to go to court. Litigation’s very expensive, we are looking for the best results for the people,” he said.

In an update on the total of ON government employees, Standing Bear said there are 469 total with 291 Osages; 45 who are spouses/ parents of an Osage; 65 who are from other Native American tribes; and 68 who are non-Native. The employees “carry out the programs we are talking about. Almost seven years ago, two-thirds of the employees were not members of the Osage Nation. We are continuing to make sure we have the best employees and Osages receiving preference in employment,” Standing Bear said.

On exploring gaming expansion in Missouri, Standing Bear said: “Re-establishing our presence in our Missouri homeland is difficult. The treaties of 1808, 1825 and the attitudes behind them still are part of history. We hope an enlightened group of citizens of Missouri will understand as we seek to establish new gaming opportunities. We know the opposition is strong. Our gaming people have put an offer on one (unspecified) site out of the five we have been looking at. We are continuing relationships with the other four, but we need to start carefully and we need to proceed knowing these political and economic conditions.”

As for this year’s opportunity to apply for more federal COVID-19 relief funding, Standing Bear said his office is working with various agencies to receive money from the American Rescue Plan of 2021 approved by the U.S. Congress.

In closing, Standing Bear said: “The state of the Nation is strong, we continue to grow, 2020 was difficult, 2021 has great promise, we know how to obtain the best for our people, it is very difficult, it takes all of our people working together to move forward. Negativity is contagious, but so is positive thinking. I call upon the Osage people to be positive and to assist each other in every way. It’s an honor to serve you and God bless the Osage Nation.”

The 2021 ON State of the Nation is available online at: https://www.youtube.com/watch?v=KUOqQsJo3ds