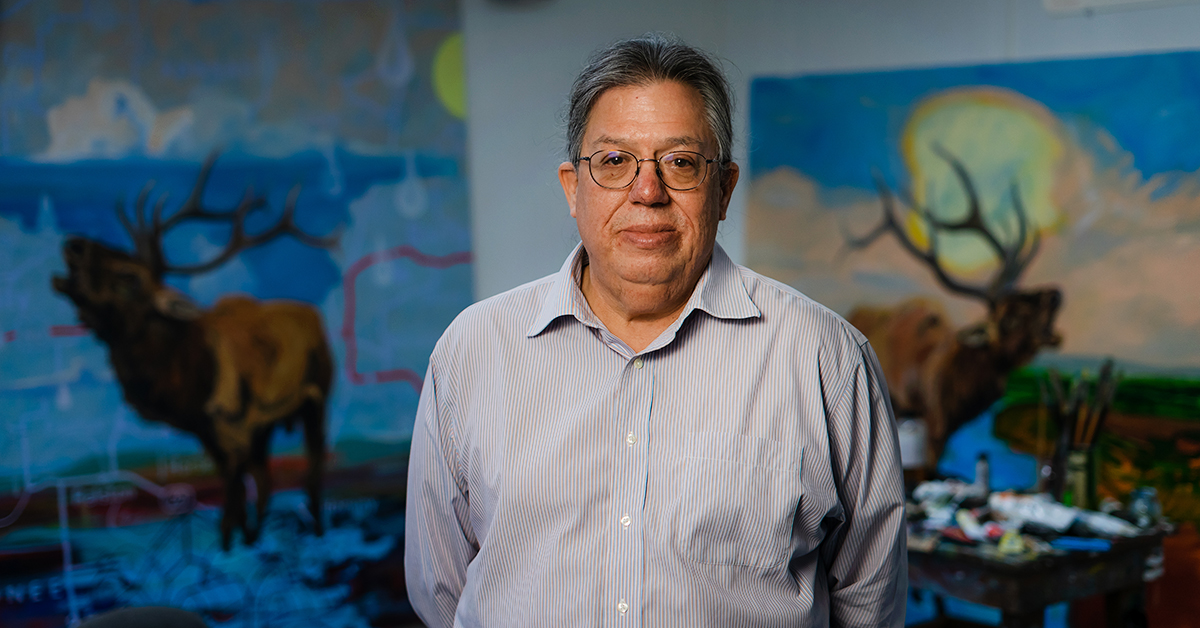 Photo caption: Osage artist Norman Akers at his studio in Fairfax. Akers has been an artist and educator for more than three decades. CODY HAMMER/Osage News

“I was one of those kids who always just made things,” remembers Akers. “Neither one of my parents really had an arts background, but at the same time they recognized that it kept me busy and that I enjoyed it. Also, growing up here (in Fairfax), you’re around traditional arts with ribbonwork and yarnwork. It wasn’t until I was older, though, that I had the opportunity to go into museums.”

When attending Skiatook High School in the mid-1970s, Akers was connected with decorated Pawnee war veteran and artist Brummett Echohawk. Echohawk was instrumental in steering him into a career in the arts which led him to the Kansas City Arts Institute (KCAI) in Kansas City, Mo.

“Kansas City seemed like a really big city to me, and I have to admit there was a culture shock,” Akers said. “I wasn’t used to navigating a big city, but what made the biggest impression on me was being around people from other cities from various parts of the United States. When I went to the Art Institute, I had a very narrow mind as to what painting was. The program was really good - most of the foundations projects were based on problem solving - which really got me to start thinking as an artist.”

After his junior year, Akers took a short detour when he made the decision to drop out of school, purchase a plane ticket and spend the next two and a half months in Europe traveling. While visiting museums in Europe, he found inspiration to recommit to academia.

“I happened to be in a museum in Vienna and I was starting to get weary of travel,” he said. “I remember walking into this room and seeing a Rubens painting and I had the whole place to myself - there was a moment when I went ‘It’s time to go home, I really want to be a painter.’ I went and got a plane ticket, came back home and finished my degree.”

Akers went on to obtain a Bachelor of Fine Arts in Painting from KCAI, a Certificate in Museum Studies from the Institute of American Indian Arts in Santa Fe, N.M., and a Masters of Fine Arts in Painting from the University of Illinois, Urbana-Champaign, Ill. His artistic practice is multidisciplinary with a heavy focus on painting and printmaking.

“My art actively seeks to engage people in examining important issues,” says his artist statement. “I address the topics of personal and cultural survival. Instead of speaking out words, I pursue a visual dialogue. Through color, line, and visual form, I express deeply felt concerns regarding removal, disturbance, and the struggle to reclaim cultural context.”

Okesa, Osage for “halfway,” is a term that is deeply meaningful to Akers. He states, “When I think about halfway, I think about duality. I think about earth and sky. I think about all these opposites and navigating that in-between-place. As a professional artist/educator the travels between work and home have been an important part of my line. Regardless to where I am, it is important to keep strong connections to home.”

Prior to the pandemic, Akers made frequent round trips between Lawrence, Kans., where he has been an Associate Professor in the Visual Arts Department at the University of Kansas for almost two decades, to his home in Fairfax. Not one to listen to music or podcasts while driving, he spent much of the travel time intentionally reflecting on present-day road signage and what that signage represents in a colonial context. Historical and post-colonial maps identifying borders, boundaries and migration have become significant drivers in his artistic expression. In a virtual lecture series hosted by the University of Kansas in 2020, Akers shared his observations: “I noticed that the signage is still about political entities trying to define a land that we call home. That’s been something that has been playing a role in my work for a while.”

Although Akers did not originally have aspirations of being an educator, working with students and watching them discover their artistic voice has been incredibly rewarding. In addition to teaching, he finds academia a place where his creativity can flourish.

“I like academia because it gives me the freedom to paint what I want to paint,” Akers said. “It gives me the freedom to explore the ideas that I feel are important. And you want to go out on that edge. I tell my students that, too. That place when you don’t know is really exciting to me because that means that the work can teach me something. And that is what making art is about.”

Due to the pandemic and his classes switching to virtual instruction, Akers has been spending most of the past year back home in Fairfax, which has been a catalyst for him to create work.

“I do think working out of Fairfax is inspirational,” he said. “It’s a place that, as an artist and as a person, I can feed off of in a very good way. Home is this place. Even when I was living out west and I was going to school in New Mexico, I can remember these trips home and as I was crossing the Arkansas River, and that feeling of being home.”

Find out more about Norman Akers’ work at www.normanakers.com. “Okesa/Halfway There,” an Artist Talk by Norman Akers, is viewable on the KU Art History YouTube Channel.