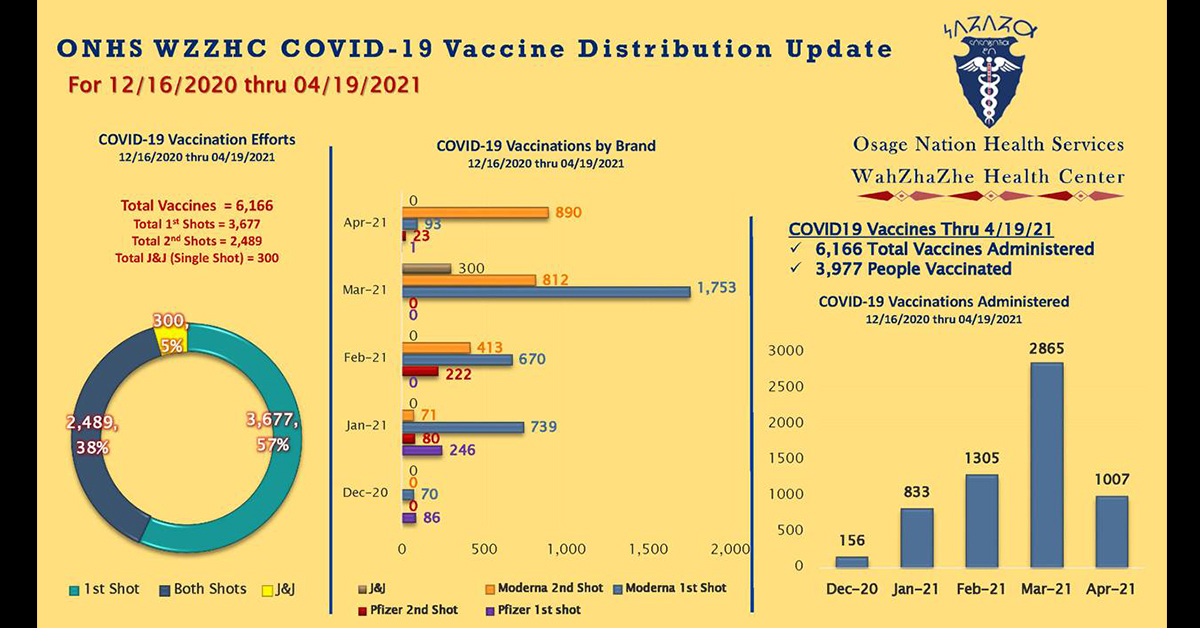 WZZHC administers 6,100-plus COVID-19 vaccinations as of April 19

As of mid-April, the Osage Nation Health Services Wah-Zha-Zhe Health Center reports a total of 6,166 COVID-19 vaccine shots administered to the general public.

The WZZHC issued an April 19 vaccine update noting the 6,166 shots were administered to 3,977 individuals who opted to receive the vaccine from clinic vaccine events or vaccination hours at the ON Civic Center in Pawhuska.

The update comes as the COVID-19 vaccines are now available to all individuals age 16 and older in the United States as of April 19. The revised and expanded vaccine eligibility guidelines also come as usage of the single-dose Johnson & Johnson vaccine is paused in the US pending further investigation.

On April 13, health officials "recommended a ‘pause' in use of the (Johnson & Johnson vaccine) to investigate reports of rare but potentially dangerous blood clots, setting off a chain reaction worldwide and dealing a setback to the global vaccination campaign,” the Associated Press reported. “The Centers for Disease Control and Prevention and the Food and Drug Administration announced that they were looking into unusual clots in six women between the ages of 18 and 48. One person died.”

On April 19, Time Magazine reported 25.7% of Americans have received both doses of the Pfizer and Moderna drugs or a single shot of the Johnson & Johnson vaccine and "since the first vaccine was given to the first patient on Dec. 14 (2020), the U.S. has delivered 264.5 million doses of the cutting-edge inoculations, of which 211.6 million (80.0%) have been administered.”

-        A total of 300 individuals have received the Johnson & Johnson vaccine shot since its offering was first available.

Follow the “Wah-Zha-Zhe Health Center” on Facebook for updates on the COVID-19 vaccine and other clinic services or contact the WZZHC COVID-19 vaccine hotline at (918) 287-0076 with questions or for more information.