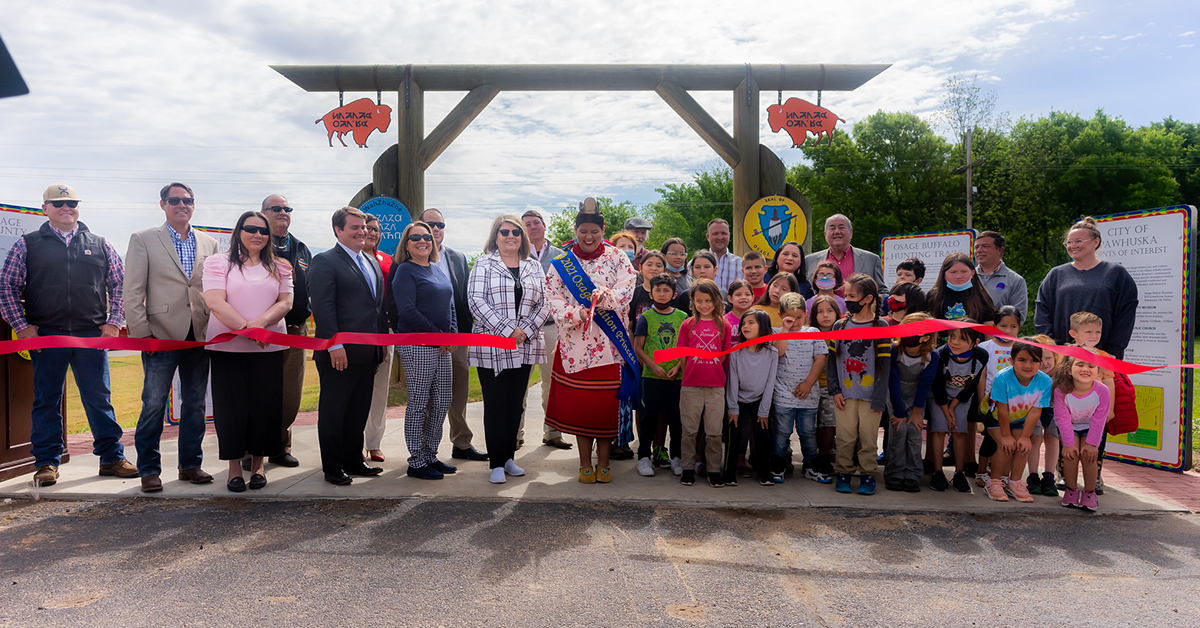 Wahzhazhe Heritage Trails opens to the public with ribbon-cutting ceremony

Maybe it was the 70-degree weather or the fact that everyone felt safe to take off their face masks, but when the students of Daposka Ahnkodapi took off running down the Wahzhazhe Heritage Trail, everyone cheered.

“It is great to build something that enhances the health and wellness of our people that our whole community can enjoy,” said Justin Carr, director for the Osage Nation’s Roads Department.

Located at the corner of Lynn Avenue and Main Street in Pawhuska, the Wahzhazhe Heritage Trails officially opened to the public Wednesday with a ceremonial ribbon-cutting.  More than 70 people, including Osage Nation officials, community members and the students of Daposka Ahnkodapi attended.

Five years in the making, the initial concept began with the former Communities of Excellence Department for an Eco Park. However, after years of no movement on the project, it landed with the Roads Department. They broke ground on the trails May 18, 2020.

“We’re looking to the future. In the next coming months, we’ll be adding playground equipment, and we are adding an outdoor classroom – that will talk about our culture and our history,” said Principal Chief Geoffrey Standing Bear. “We are adding other amenities as we go forward.”

Standing Bear said the Nation is working on plans for a sports park and clinic, to be possibly located not far from the heritage trails.

“We can do this. We’ve got our plans, architects, engineers, we know how to use the money … we’ve proven we can work together, we can do it,” he said.

The Roads Department used $1.5 million (100%) in federal Tribal Transportation funds to build the trails, according to a prepared release. There is approximately 5,000 linear feet of nature trails and approximately 1.5 miles of ADA-accessible trails in the park. Project contributors include Wallace Engineering, Builders Unlimited, Inc., and Osage Roads Inspector Joey Bills.

Walking along the trails, individuals will enjoy beautiful views of tall tree canopies, views of Bird Creek and a suspension bridge. For those who want a more strenuous walk, the nature trails include inclines that provide a good workout.

Congressional Speaker Angela Pratt, who ran the trail with Daposka Ahnkodapi students, Congressman RJ Walker, Carr and Pat Fischer from Builders Unlimited, Inc., gave remarks on the benefits to the community the trails will have, as well as those visiting Pawhuska. Walker remarked the trails are conveniently located across the street from the Osage Nation Visitor’s Center.

Casey Johnson, the Nation’s Director of Operations, quipped that graduations are coming up and a good place to shop for graduates is at the Visitor’s Center.

“The Roads Department took the lead on this, they did all the heavy lifting, but I would be remiss if I left out Jann (Hayman) and DNR (Department of Natural Resources), they’re doing some work throughout here,” Johnson said. “Craig Walker is putting in a frisbee golf course out here in conjunction with the trails. Teresa Bledsoe and the Child Care Department are going to help fund some of the playground equipment. This is a huge team.”

For more information about the Wahzhazhe Heritage Trails, please contact the Roads Department at (918) 287-5204 or visit their website at https://www.osagenation-nsn.gov/what-we-do/roads-department.