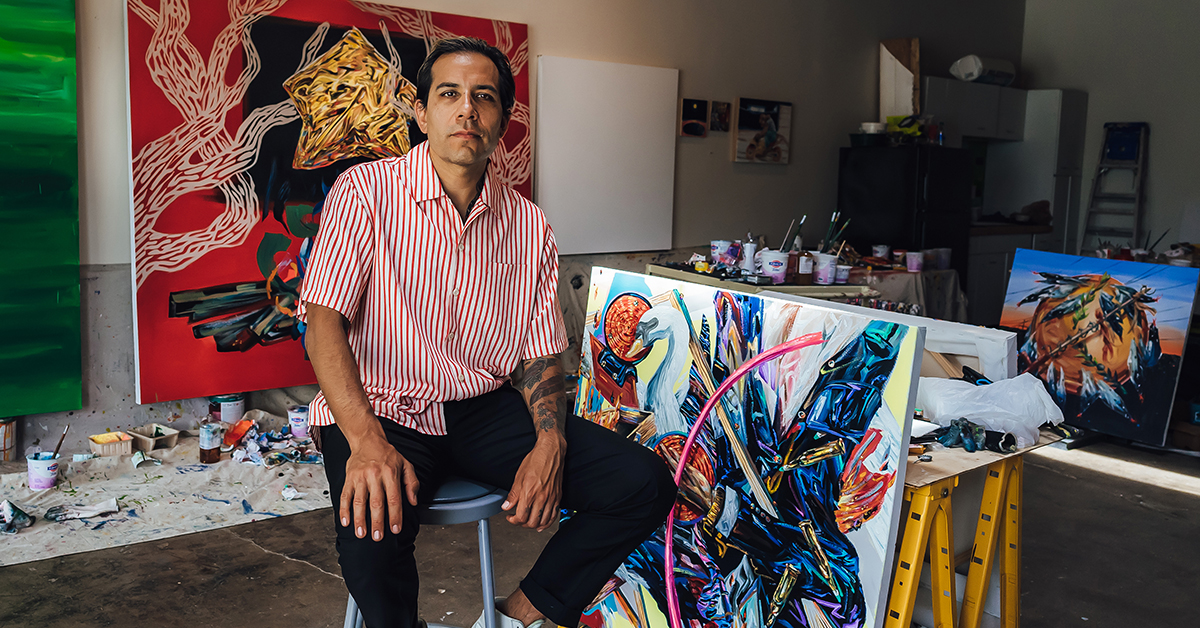 Yatika Starr Fields on giving back and strengthening community connection

Photo caption: Yatika Starr Fields, Osage/Creek artist, at his studio in Tulsa. Fields is a painter and muralist whose vibrant and kaleidoscopic imagery is globally renowned. CODY HAMMER/Osage News

Yatika Starr Fields is a painter and muralist whose vibrant and kaleidoscopic imagery is globally renowned. Born into a family of artists, he is the son of clay and ceramics artist Anita Fields and photographer Tom Fields. He spent his early childhood years in Hominy and Tahlequah before his family moved to Stillwater where he spent his formative school-age years.

Fields’s art and activism has provided him with opportunities to travel the world and engage with diverse cultural communities, which he credits for much of his growth and success. One of the most impactful experiences happened in 2001 during his first year of college at the Boston Institute of Art when he was selected to serve as a United States ambassador to represent American Indian Art at the Asia-Pacific Economic Cooperation (APEC) Conference in Borneo, Malaysia.

“I got to meet all of these artists who were quite young, but older than me. They were already making amazing work,” remembers Fields. “I saw on a global scale what artists were doing and the dialogue they were having, and that shifted my perception of what I wanted to do.”

In his early twenties, Fields began to grow jaded to what the contemporary art world was offering at that time, specifically the significant lack of Native art. This restlessness led to him putting down the paint brush and stepping into the East Coast graffiti art culture.

“Graffiti is very confrontational,” he said. “This was me rebelling against the western idea of fine art. It was me finding another new voice and new style and rejecting everything I had just learned (in college).”

The legal precarity of graffiti prompted Fields to step away from the practice, but almost twenty years later the ability to work large-scale and use full body motion are skills he continues to utilize when creating large murals in front of an audience: “It’s almost choreographed, like you’re putting on a performance.”

After Boston, Fields moved to New York City where he worked as a bike messenger and immersed himself in exploring the NYC art world and participating in group shows. From there, he had a short stint in Seattle before returning to Oklahoma. Although traveling remains vital to his growth, cultural connection has continuously kept Fields grounded: “I’d always come back home for the dances and that’s what made me feel whole again.” In 2016, Fields joined the Standing Rock Sioux Tribe and their supporters to protest the Dakota Access Pipeline. This experience was a major event in his life and significantly shifted the content of his artwork and how he perceives his responsibility not only as an artist, but as an activist.

“My dad was at Alcatraz and we had family friends at Wounded Knee, so I’ve always known about Native American occupations and the politics of the United States,” said Fields. “There was an opportunity to go, not just as a spectator, but to be a believer for who we are as a people and to fight for our rights just like my ancestors did. It was very powerful.”

The opportunities and experiences Fields has had both at home and abroad has instilled a deep sense of community connection and wanting to give back.

“I think I’ve only really seen that in the last five years - I’m at an age now that it’s my turn to do that,” he said. “In your twenties you're still relying on mentors and older artists, but then you get to a point that you say ‘Oh, I’m that artist now.’ It’s in my nature to give back and I’m happy that it’s there. Any young artist, especially Native artists, as long as they’re doing it right - right meaning challenging the perception of the work and working with their community - I want to help because I’ve been fortunate to get where I am today through the help of others.”

Through the Tulsa Artist Fellowship, Fields received a grant in partnership with his mother Anita Fields to create a community engagement project titled “War Club.” The project is a series of conversations focusing on Oklahoma Indigenous activism from the late 1960s to present day. The series, set to begin in May 2021, highlights stories of individuals who have made significant contributions to the social justice landscape and the role art has played in their efforts.

“As a Native, we are political just by being alive and existing,” he said. “I’m an artist, I’m an image maker and thinker. I want my work to be with dialogue to make you think about things. Maybe we can find a solution through these works. I’m not for sure, but it’s worth trying, and we have to do it together.”

Fields is represented by the Garth Greenen Gallery (NYC), Rain Maker Gallery (Bristol, UK) and Joseph Gierek Fine Art (Tulsa, OK). You can find out more about his work at yatikafields.com and by following him on Instagram (@yatikafields).