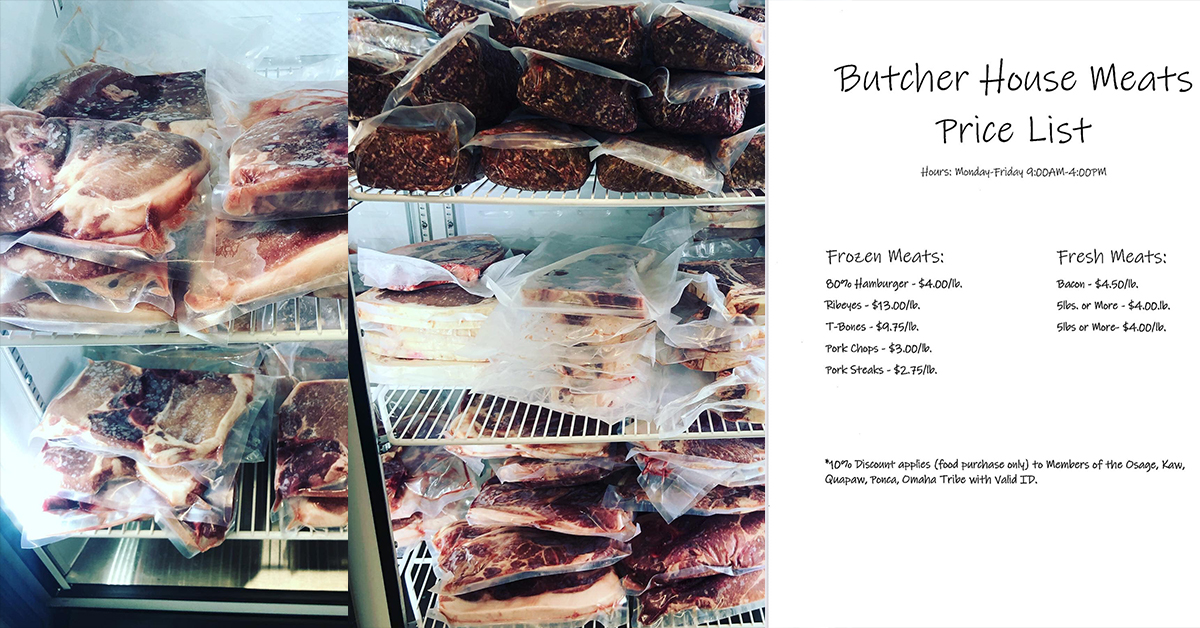 Butcher House Meats, the Osage Nation’s meat processing facility, is officially under state USDA inspection. The facility now has a dedicated state-appointed inspector who must be onsite for slaughter. The storefront opened to the public Tuesday.

The new designation allowed the facility to open the storefront and sell directly to the public. It also allows the facility to ship bison anywhere in the country, expanding the reach of the facility’s services.

“There are a lot of rules, paperwork, and regulations that nobody here has ever worked under,” said Butcher House Meats manager Joe Thompson. “It’s a long-term process but people here are trying really hard, they’re interested, and they want to learn.”

Already, the facility is working with the Denver-based and Osage-owned restaurant, Tocabe, to process and ship bison meat. Tulsa-based restaurant BurnCo Barbeque has expressed an interest in cold packing products to ship through US Foods, but the butcher house will have to be under federal inspection before that service will be available.

Thompson said the butcher house has a lot of growing to do before they can switch to federal inspection. Thompson, who has over 35 years of experience in food processing and plant management across the country, said for a facility of its size he’s been surprised by the rapid growth.

The butcher house started processing in February with just two head, jumped to 38 in March, 49 in April, and 55 in May. Thompson said they had around 62 head scheduled through the end of the year and wouldn’t be able to process more without increased staffing. If staffing decreased, he said he might have to cancel existing bookings. At the time of writing, the butcher house had eight staff members, including Thompson, and three temporary staff members through the Osage Nation Employment and Training Program. They were budgeted for 12 employees.

Now that the storefront is operational, Thompson plans to process at least two or three head of cattle each week from the Osage Nation Ranch to supply the shop. Roast, hamburger and brisket will be available. They will also sell Ribeyes, T-Bones, Boneless KC Strips, Pork Cutlets, Pork Chops, Tenderloins, and Bacon.

Butcher House Meats is open Monday through Friday, from 9 a.m. to 4 p.m. and is located at 115 Eagle Avenue in Hominy. A 10 percent discount applies (food purchase only) to members of the Osage, Kaw, Quapaw, Ponca, and Omaha nations with a valid tribal ID.