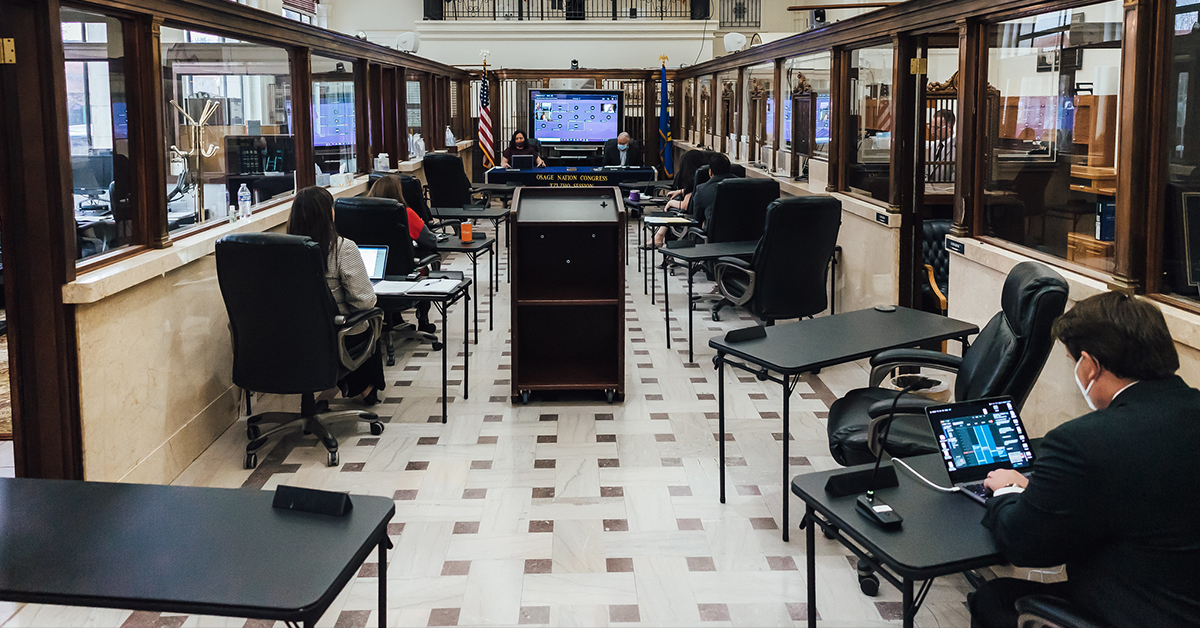 As the Nation considers projects and other spending uses for its allocated $108 million in federal American Rescue Plan Act funding, some Osage Nation Congress members are expressing interest in using the money to offer direct payments to Osage constituents.

Political chatter regarding direct payments comes as other Oklahoma tribal nations recently announced plans to use their respective funding to offer individual payments to their tribal members as was done by some Nations - including Osage – with the 2020 Coronavirus Aid, Relief, and Economic Security Act funding.

The discussions come after the Seventh ON Congress passed bill ONCA 21-49 (sponsored by Congressional Speaker Angela Pratt) which amends Osage law regarding authorization to expend non-tribal funding during its May 24-26 special session. The amended law now reads: “Non-Tribal funds shall not be drawn from the Treasury of the Osage Nation, except by appropriation.” With the law now amended, Congress will appropriate the Nation’s ARPA funding in respective legislation approved by a vote of the 12-member legislature during future sessions.

The American Rescue Plan Act of 2021 is a $1.9 trillion federal appropriation passed by the U.S. Congress and signed into law on March 11, 2021. Various governmental entities, including Osage, submitted applications requesting ARPA funds.

Principal Chief Geoffrey Standing Bear announced the Nation is receiving $108 million in ARPA funding ahead of the May special session and noted his office and legal counsel are reviewing federal guidelines and rules – subject to continuous revisions and updates – for spending ARPA funding with the final document yet to come from federal officials.

In a June 2 news release signed by Congressmen Eli Potts, Billy Keene, John Maker, and Joe Tillman, those legislators voiced support for individual payments from the ARPA funds. “We were encouraged to hear the Chief had signed ONCA 21-49 that was passed during the most recent special session of the Osage Nation Congress. We feel that this legislation properly restores the responsibility of appropriating federal funds to the legislative branch of government ... We similarly join members of multiple nations in supporting direct payments to the Osage people.”

During the special session, Standing Bear said his office’s advisory team is reviewing several projects which could be proposed uses with ARPA money, including HVAC improvements for ON buildings, a Fairfax senior housing project, and new Primary Residential Treatment (PRT) facilities, as well as administrative costs.

“The Advisory Team has cleared only a few projects and we have been moving forward on several of these and includes the Fairfax Senior Housing Project, the new men’s, women’s, and juvenile Primary Residential Treatment facilities, and the Transitional Living Center. Also approved and newly started is the design phase for the outdoor recreational park, the Hominy Senior Housing Project, and the Richard Luttrell Memorial Park Project. Other projects which fall within ARPA and the interim rules, but which have been tentatively approved, include HVAC replacements with COVID-compliant systems across Osage Nation properties, continued growth of the Osage Nation Broadband internet system, water and sewer improvements in the Villages of Pawhuska, Grayhorse and Hominy, Language, Culture and Museum remote learning initiatives, continuation on existing CARES projects, and administration costs for carrying out ARPA. These approved or tentatively approved projects amount to $115 million,” Standing Bear told Congress.

In response to the recent Congressional discussion on direct payments to Osages, Standing Bear said: “The Osage Nation Individual Assistance Program is not a new idea. Last year our (Financial Assistance) program distributed nearly $13 million dollars to Osages everywhere. This program has used funding from the federal CARES Act of 2020. We supplemented the program with money from our casinos. Over 14,000 Osages benefited.”

In his June 3 statement, Standing Bear said: “The American Rescue Plan Act of 2021 (ARPA) provides new opportunity for Osage individual assistance. We are moving forward with plans first developed in January. Since then, the United States Treasury interim rules appear to require proof that anyone receiving (assistance) payments actually experienced a COVID caused negative economic impact. Once the final federal rules are issued the Osage Nation Individual Assistance Program new funding from ARPA will be requested from the Osage Nation Congress by my Administration.”

During the May special session, some Osage Congress members referenced the Cherokee Nation’s plans approved by its respective council to issue one-time $2,000 COVID relief individual assistance payments to all 390,000-plus CN citizens from its $1.8 billion in ARPA funding, according to local news outlets.

“I’ve been receiving lots of calls from Osage constituents asking about possible stimulus checks, anxiety grows every day,” Keene said. “If all these other Tribes are making it a priority to deliver direct aid in the form of distribution checks to their people, it’s imperative the Osage Nation make that happen as well. It’s not      time for us to be so risk-averse and wait, while other tribes, with consultants and lawyers too, already    have the green light.”

During the special session, Congresswoman Alice Goodfox noted the timing of the ARPA funding award, which comes one year before the 2022 ON General Election where six Congressional seats and both Executive Branch elected offices will open and “we don’t know who’s going to be sitting in the seats ... And so many of these projects may not take effect or groundbreaking until that time and so what happens if it changes? ... What if there’s a big change-up and the whole focus changes? That’s what I’m wondering about. Are the rules or plans allowed to change a year from now or do we have to move forward with them? How does that all work?” she said during the session.

Potts also expressed support for direct payments to all Osages, adding Congress has the role as “the people’s representatives,” in referencing Standing Bear’s executive message during the special session, Potts later said in the joint statement: “Chief Standing Bear said it in his opening remarks, ‘the remaining $19 billion dollars is allocated to all Indian Nations based on membership enrollment and tribal employment … [and that] Osage Nation membership was submitted as 22,925 and our share of the $12.35 billion dollars is based on that certified submission.’ The notion that only those in Osage County or that not all members of the Osage Nation should somehow benefit from these funds is misguided and simply wrong.”

In his statement, Tillman expressed further support for specific individual payments to Osages. He said: “If we gave half of our allocation, instead of letting the Chief and the Osage bureaucracy tell them what we’re going to spend it on, that’s putting the needs of the Osage People first. That’s giving every Osage citizen $2,300 dollars, and we’d still have more than the annual amount we get from gaming and more than the total amount the Nation received from the CARES Act. That’s a plan I could get behind.”

ON Congressional Legal Counsel Loyed “Trey” Gill said “it’s my understanding this legislation (ONCA 21-49) was filed to initiate this conversation” during a Congressional Appropriations Committee meeting held during the special session.

Congresswoman Paula Stabler said Standing Bear’s initial list of proposed projects provided is “reasonable” and ONCA 21-49 “talks about our due diligence to the people, to say good decisions were made, these are good projects moving forward ... I do think we (as Congress) need to be a part of it, we need to be a part of the oversight of it. Not involved where it’s outside our boundaries, but at least be a part of the final decision making to move forward with it.”

Second Speaker Jodie Revard said the intent of a three-branch government is to have checks and balances and is part of the reason she was open to considering ONCA 21-49 before it passed.

Assistant Principal Chief Raymond Red Corn told Congress during the special session: “Everything is in draft form at this point, no contracts have been signed or anything, we are still in the vetting process ... I’m pretty sure we have not received a green light on any specific project yet. I don’t know how soon that’s going to happen. Each idea has been drafted out. I can tell you that senior housing in Hominy and Fairfax of course have been discussed ... We aren’t that far along as far as making final decisions at this point.”

For more information regarding ON Congressional regular or special sessions, filed legislation and Congressional committee meetings, visit the Legislative Branch website at www.osagenation-nsn.gov/who-we-are/legislative-branch