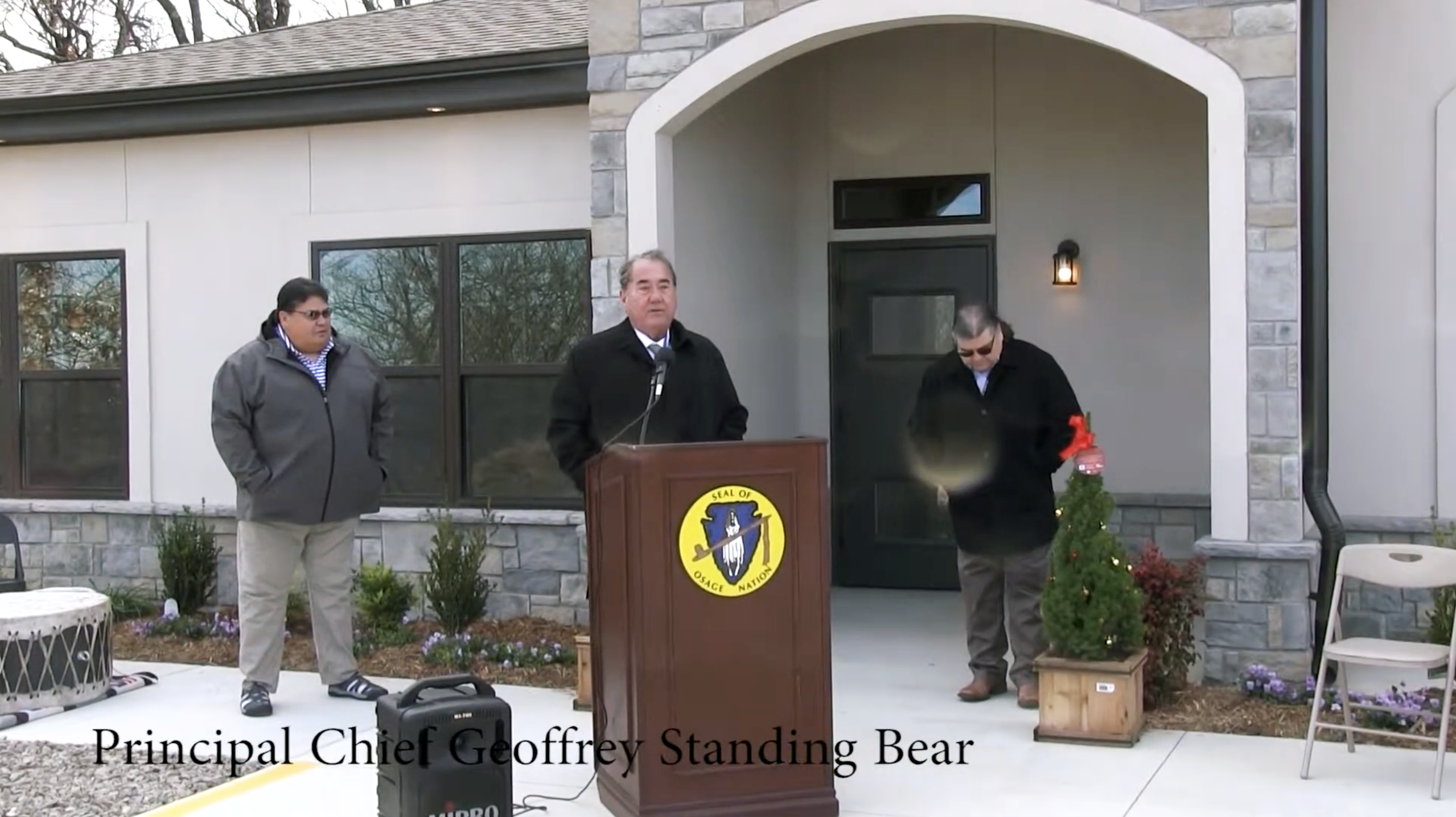 Principal Chief Geoffrey Standing Bear gives opening remarks at the opening of the Domestic Violence shelter in 2017. The shelter has been closed for the past six months due to understaffing and grant trouble. Screenshot of Osage Nation YouTube

Stacy Lookout has a monumental task ahead of her.

In August, Lookout became the new director for the Osage Nation’s Counseling Center, Primary Residential Treatment, Treatment Alternative to Street Crimes and the Family Violence program. She took over four programs that are nearly 100 percent federally funded through grants.

She told the ON Congressional Health and Social Services Committee on Sept. 20 that the grants pertaining to the Nation’s Family Violence shelter are in “chaos.” As a result, the domestic violence shelter has been closed for the past six months. Lookout did not elaborate on the grants situation.

With the shelter closed, Lookout has had to refer women and families to other shelters or house them in hotel rooms. She said the other problem is the lack of personnel to keep the shelter open. The shelter is meant to be open 24 hours, 7 days a week and must be always monitored.

“When we took over there were only four employees over there total and two of them were part-time. So that entire department was working with two full-time and two part-time,” Lookout said. “We’ve got a part-time shelter advocate, a full-time shelter advocate, and these are all open positions. A DV Advocate 2, DV Advocate I, and a receptionist advocate and we are working to get those filled and get the shelter reopened as soon as possible.”

According to the Nation’s jobs site, the only job listed for the Family Violence department is a DV Advocate 2. Lookout said the delay in advertising the needed positions is because the grants for the program need to be “ironed out.”

Second Speaker Jodie Revard, who was the former Deputy Director of Operations for the Nation before her 2020 election to Congress, said the shelter has been an ongoing issue and asked if there was anything the Congress could do to help reopen the shelter. Lookout said the worst-case scenario is the grants couldn’t be worked out and they would have to come to Congress for funding.

“We have calls every week from women seeking shelter and I hate having to refer them elsewhere but that’s what we’ve had to do,” Lookout said.

Revard asked how many women have been referred elsewhere during the six months and how many of those women had children.

“Upwards of 20, we’ve had to refer out since it’s been closed. It’s coming in at a rate of a couple every week,” Lookout said. “For every three referrals at least two have at least one child involved.”

The Nation opened the 3,000-square-foot Domestic Violence shelter in 2017. The shelter features housing amenities including five bedrooms with a living room, kitchen and office space that can house up to eight women. One of the rooms is equipped with bunkbeds and a crib for a family. The shelter was built with $800,000 in unspent federal money the Standing Bear administration discovered when he took office in 2014.

Lookout said they have applied for no-cost extensions for their current grants and have also applied for two new grants. The first new grant is from the Office on Violence Against Women and the second grant is the Tribal Victims Services Set-Aside grant for $1.5 million.

If you or someone you know is suffering from domestic violence, please call the Nation’s 24-hour crisis hotline at (866) 897-4747.