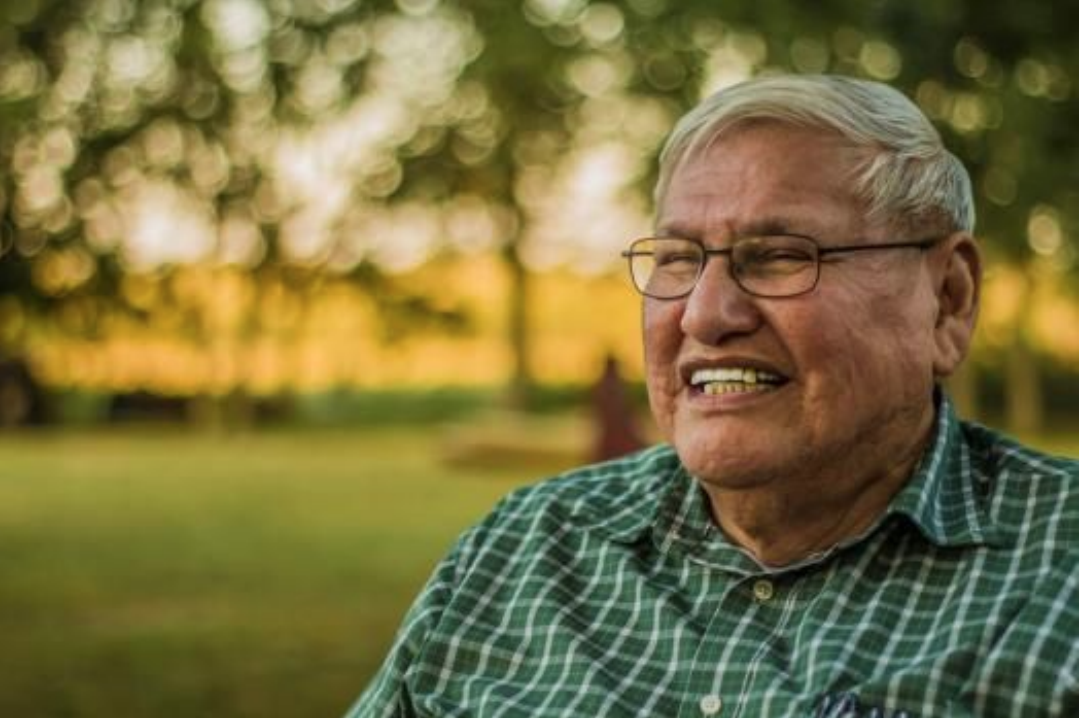 A 2016 portrait of Herman “Mogri” Lookout on his land by his family’s Native American Church, just east of Pawhuska. Photo by Ryan RedCorn

For the past 40 years, Herman “Mogri” Lookout has been a student of the Osage language. He was the Language Department’s first director; he led the team that developed the Osage orthography; his efforts with Google transformed the orthography into Unicode, making it possible for Osages everywhere to write the orthography on any digital platform.

For all of this and more, Kansas State University is bestowing the 80-year-old Lookout with an Honorary Doctorate in Education. His commencement ceremony is at 1 p.m. on Dec. 10 at the Bramlage Coliseum in Manhattan, Kansas.

K-State President Richard Myers requested the honorary degree from the Kansas Board of Regents on Sept. 16.

“Maybe the University of Washington professor, Dr. Jean Dennison (Osage), said it best when she wrote in her letter for support of this, that he is not only the most knowledgeable living person on the Osage language, but he is almost singlehandedly responsible for its revitalization. He created the backbone for all Osage curricular materials to be developed from now until the future and he is amongst the most knowledgeable people in the world in this specific content area,” Myers said.

“All of this has created a renewed pride among all Osage people of their history and their way of life. So, I respectfully request that the Board of Regents approve and confirm an honorary doctorate degree on Herman Mongrain Lookout,” he said.

The regents voted unanimously in favor.

On a phone call from his office at the language department in Pawhuska on Sept. 23, Lookout is humble and unassuming. He’s known for these qualities and eases into a conversation about why he chose to develop the Osage orthography.

“I never realized how big that was. I just wanted to make it easy to read and write. This guy, he recently had students on a Zoom call, and we were sitting in and he was talking to me. Then he asked the students, ‘Have you ever met anybody who invented anything? This guy here has invented an orthography, an alphabet.’ I never looked at it like that before. Yeah, I did that, but I was just trying to make it easier for our tribe to read something that only belonged to them. No linguist could come in and take it, alter it or anything. In fact, they left it alone.”

He said in the beginning before the orthography was developed, they tried teaching the language with the English alphabet. But linguists said it wasn’t working. He became frustrated because the English language did not have letters that made Osage sounds, so no matter how many different ways they tried to write it, it never sounded correct. At the time, he had language employees Debra Atterberry and the late Mary Bighorse bring him symbols that matched the English alphabet and they ended up with the current orthography that is used today.

“So, I thought I’ll just take a sound and represent it with a symbol. They liked to use the English alphabet, so I made it close to that, so I made it look like that, but it wasn’t that. It would look like an A or a Z, but it wasn’t English,” he said. “Then a linguist would come in and say what does that symbol sound like? I would tell them, and they left it alone. So, I did accomplish that, and they couldn’t come in and respell our words. It allowed us to document it in our own sounds and that’s what I did and all I wanted to do.”

Lookout was raised by his grandparents who spoke fluent Osage. According to a 2016 video directed by Ryan RedCorn, a dedicated Osage language student himself, Lookout has wanted to learn the language since 1972. His uncle told him to instead learn something useful, like French or Spanish. It wasn’t until the year 2000 at a New Year’s Eve Handgame when Eddy Red Eagle Jr. stood up and challenged everyone there to learn the language.

Both Red Eagle Jr. and Lookout are full blood Osage, two of only seven remaining full bloods. Lookout said that he went to visit Red Eagle Jr. the next day they spoke all evening about learning the language. They both knew how to pray in Osage, but when it came to conversing with one another, that was where the challenge began.

They began hosting language classes in their homes, and in Wakon Iron Hall in Pawhuska. In 2003, an Osage Tribal Councilman by the name of Jerry Shaw approached Lookout and asked him to lead a language department and they would provide the funding. That year the 31st Osage Tribal Council appointed Lookout director and he began teaching the language as a profession. One of his students was Vann Bighorse.

Bighorse is now the director of the Osage Language Department, and he is also the person responsible for contacting K-State to get the ball rolling on the honorary doctorate degree for Lookout.

“A lot of us attended K-State University and knowing we had an Osage tribal member teaching there, Dr. Alex Red Corn, I thought it would be a great opportunity to try. I’ve thought a lot about this, and that when we want to honor somebody it’s always too late,” Bighorse said. “Mogri has put in over 40 years and dedicated his life to working with the language. I just had this urgency and working with Mogri for all these years, since 2003 when I started taking class with Mogri. I was just appreciative of all his dedication and work that he did for the Osage language.”

He said it took a year of gathering articles and letters of support on Lookout’s behalf. They received letters from Craig Cornelius of Google, Dennison, and Dr. Daniel Swan, who recently retired from the University of Oklahoma, among others.

“It just seemed like we wait too late for some things,” he said. “I hope that Mogri’s got 20 more years left. I think sometimes you think things go on forever and ever, and it doesn’t.”

Lookout’s voice is commonly recognized by Osages everywhere. He has prayed in Osage at countless dinners, events, meetings, cultural events, prayer meetings, funerals, the list goes on and on.

Since 2003, the Osage language has been taught at various sites on the reservation in evening classes, daytime classes and now, Zoom classes. During the 2020 Coronavirus pandemic, when the Nation was nearly shut down and people were staying home, Lookout was hosting a Zoom class for advanced students.

Lookout’s been honored numerous times by many organizations. In 2012 he was selected as an honoree for the AARP Oklahoma Indian Elder Honors.

In 2015, the Fourth Osage Nation Congress commended Lookout for his leadership of the Osage language department and the revitalization of the language. The commendation read in part: “Lookout is hereby recognized and commended by the (Congress) for his decades of service to the Osage people as a man who has never forgotten how important our language is to the future of our culture, and for his dedication to preserving the language and teaching Osage to all of us.”

That same day the Congress adopted the Osage orthography as the official written Osage language.

He said the new generation likes to type the orthography and send text messages, so now they will have more examples of sentence structure using the orthography. He said he wants the language to live forever.