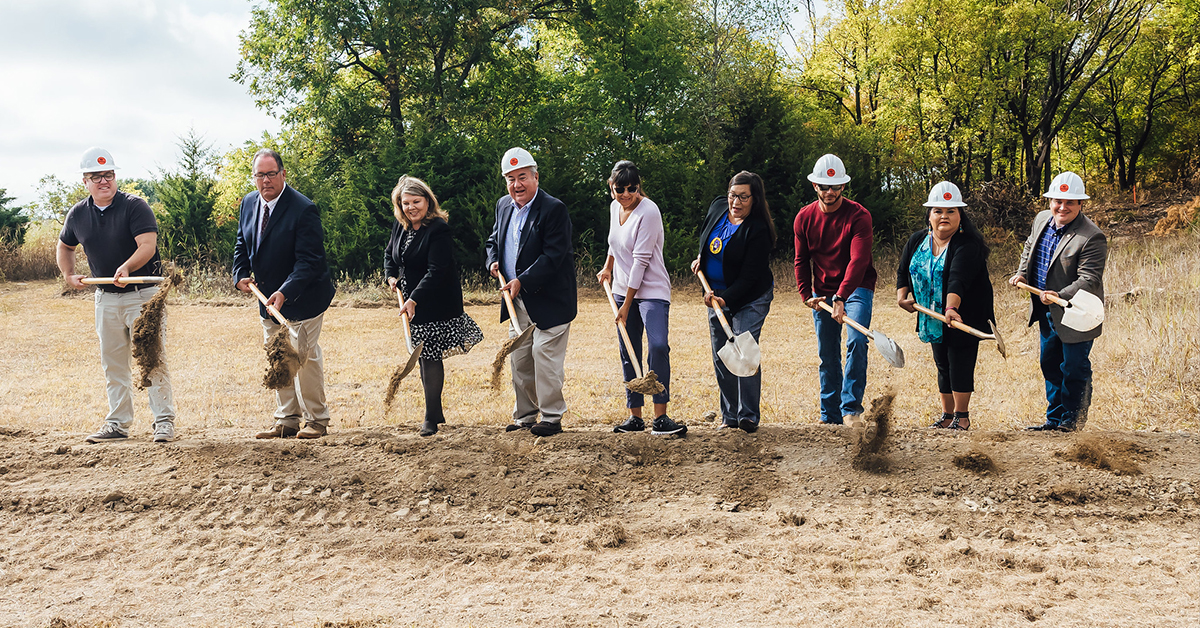 FAIRFAX, Okla. - Osage elders living in the Grayhorse District and other parts of the western Osage Reservation will soon have senior housing availability thanks to the start of a 20-unit project on the city’s south side.

Principal Chief Geoffrey Standing Bear said he is pleased with the progress of the reformed Osage government and several endeavors that developed over the years, including the Housing Department. “All that momentum and all that focus on these priorities takes our people working together. Yes, it’s easy to say, but it’s something to see because we couldn’t be doing this today if it weren’t for (current and past housing officials including late director Joe Freeman), the priorities that were set, the day-to-day work that was being done to get here today,” he said at the groundbreaking.

Standing Bear also acknowledged the work of other government entities and officials, including Congress, the Nation’s Real Estate Services Office, Roads Department “because it’s a concerted effort and all of you are in support of it ... We’ve got to have people in maintenance, we’ve got to make sure the (ON) police are working together with Fairfax police, all of that work goes on.”

Andrea Kemble, acting Housing Department director, said “we are blessed to have this opportunity to finally meet the needs of our Osage people here in the Fairfax community with our Pah-Sue-Li'n people and it’s going to bring in affordable and safe housing to this community. And so the units, when they’re designed and they are plans that the Nation already owns, are designed to be ADA compliant for aging tenants, those that are disabled. They are designed to have energy-efficient appliances to keep the utilities affordable for those who are on fixed incomes. They come with two bedrooms that are approximately 1,200 square feet in living space with a front porch, back porch, fenced-in back yard in the design plan.”

Kemble added “we also have a communal area that we’re designing so families can gather, visit your children outdoors in a nice safe environment. The American Rescue Plan does specifically state these activities and projects should be targeted toward low-income communities, so we have a policy and preference laws that we’re adhering to, to make sure that Osage applicants do rank higher on those waiting lists and they will be first to move into these units. Affordable rent will be set up, approximately 20% of their annual income to make sure they are affordable for our people.”

During the 10th Special Session, Congresswoman Brandy Lemon sponsored bill ONCA 21-55 which appropriated $8 million in ARPA funding for the project’s design, engineering and construction costs on land purchased in May. The Nation presented a $57,000 check to the Town of Fairfax for the 13.63-acre land purchase made with tribal funding.

According to a news release, ON Director of Operations Casey Johnson will oversee the construction management team Builders Unlimited throughout the project. "Some people like to live where they grew up, and a lot of them grew up in Fairfax, so they'd prefer to live over here," Johnson said in a statement. “Expanding our senior housing outside of Pawhuska is a way to thank elders for all they have done for us.”

Before the vote on ONCA 21-55, Lemon said “this has been a long time coming. Every one of us know how important our elders are to us and how much we cherish them, and we are fortunate enough at this time to have this opportunity to be able to erect other dwellings outside of the Pawhuska area and the land’s already been purchased here in Fairfax for that particular construction to begin. I’m just happy that we’re here today and this is in front of us.”

James Weigant is the Nation’s COVID Task Force Coordinator and previously worked in the Housing Department. At the groundbreaking, Weigant noted, “the American Rescue Plan made all this possible, these are exciting times.”

Weigant also shared some history in his remarks including: “Senior Housing started in Pawhuska in 2004 when we built the first eight duplexes around Title VI (the Elder Nutrition building) then in 2006, we added six more duplexes on the north half of the complex. We have not seen any new senior housing in over 15 years. Senior Housing has always had a waiting list, however, our lack of housing units to meet this need has always been a matter of funding. Each year, we receive (federal) housing money from HUD, those funds must cover all housing activities, emergency rehab, full rehab, down payment assistance, homeownership, rent/ mortgage vouchers, senior housing and all of the overhead and administration (costs) to administer all this.”

“Each year, we are usually able to set aside construction funds for the future, some years not. That balance slowly builds over the years until we have enough money to cover a new construction project,” Weigant said. “We had recently been able to save just enough HUD funds to build the five new duplexes in Pawhuska right as COVID hit. While expanding senior housing to other parts of the reservation has been a long-standing priority of the Standing Bear administration, it would’ve taken several years to build up enough surplus funds for a proper $8 million expansion like we have here today. The American Rescue Plan Act moved Osage Nation senior housing forward by several years to allow at least 20 housing units across 10 duplexes to be constructed here in Fairfax today.”

Weigant also referred to the 2006 Osage Constitution, stating: “We shall provide for the security of Osage elders by establishing and promoting programs to contribute to their economic, physical and social wellbeing. Senior Housing is this section of our Constitution coming to life in the best possible way.”

For more information on the Nation’s Housing Department, Senior Housing and other services, visit www.osagenation-nsn.gov/services/housing.