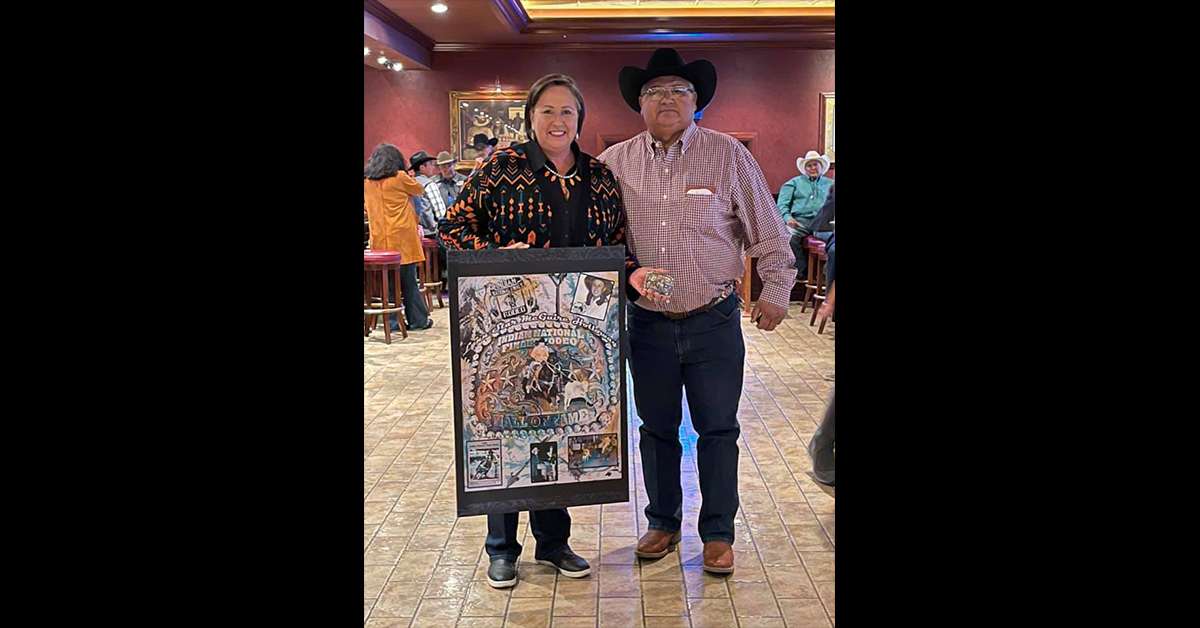 Lynn Star McGuire Holloway is a local legend when it comes to female rodeo stars.

She was inducted into the Indian National Finals Rodeo Hall of Fame over the weekend in Las Vegas at the South Point Hotel and Casino. The INFR held its annual rodeo Oct. 19-23 and featured the best qualifying male and female contestants of all ages from across the country and Canada.

McGuire Holloway was honored during an INFR Hall of Fame Luncheon on Oct. 23 with her fellow 2021 inductees Dale Bird, Karl Dennison, Jim Gladstone and James Hunt Jr. She was given a belt buckle and framed poster with photos of McGuire Holloway competing at the INFR.

According to a Cowboys of the Osage podcast featuring McGuire Holloway that aired on April 15, 2021, she attended her first INFR in 1977 at the age of 13. In total, she qualified for the INFR 17 times.

A list of some of her major rodeo achievements include:

She is also featured in The Ben Johnson Cowboy Museum in Pawhuska as the “Undisputed Women’s Steer Roping Champion” and a “Legendary Female Roping Champion.”

Headquartered in Browning, Mont., INFR currently has 13 Regions within the United States and Canada with members ranging from 8 years of age to 80. Indian Pro Rodeo is one of the only sporting events where children can compete with their parents and grandparents, according to their website.

Contestants compete for over $1,000,000 in prize money and awards throughout the year, which culminates with the Indian National Finals Rodeo, where 350+ qualified contestants compete in the eight major events. There were 75 Tribes represented at 2021 rodeo, according to their website. The majority of the INFR members are also members of the Professional Rodeo Cowboys Association (PRCA).

Since 2005, the nonprofit has provided over $50,000 in scholarship assistance to members of the organization and take pride in seeing the INFR Cowboys and Cowgirls achieve their educational goals, according to their website.

McGuire Holloway said she has been riding horses since she was five years old. She grew up on a ranch, complete with a roping arena, and helped her family work cattle for local ranches. She is the daughter of Jack and the late Page (Lillie Rose Wagoshe) McGuire, who was full-blood Osage.

She and her older sister Lisa began to compete in junior rodeos at a young age and they competed in bronc riding, bull riding, and they rode steers. But after her sister broke her collar bone while bull riding, her dad put an end to it. As Lynn got older, she moved on to team roping, barrel racing, roping, steer roping, breakaway calf roping, Indian Relay Racing, and more.

Once she became Miss Indian Rodeo in 1982, she and her father traveled around the country and Canada so she could represent her title, she said. Her Miss Indian Rodeo pantsuit, made by Osage artist Maudie Cheshewalla, featured ribbonwork down each leg of her pantsuit and her saddle blanket was also edged in the same ribbonwork pattern. The banner she wore also had matching ribbonwork. She said the pattern was from her Wagoshe family. The pantsuit is now on display in The Ben Johnson Cowboy Museum.

She also said it was a different time when she was growing up. She rode her horse every day for most of the day. Jumping fences, riding on their land, racing their horses, they swam in their pond with their horses.

When asked what advice she would give to the younger generation, she said:

“I’d like to see kids nowadays to show respect to their elders, that’s above and beyond. They’ve got to respect their elders. Don’t be lazy, if you want anything you gotta get up and go get it. Nobody’s gonna hand it to you. You have to work hard for it, whatever it is you want in life. There’s nothing you can’t accomplish if you put your mind to it, whether it’s a men’s sport or not. I’ve roped against a lot of men, there weren’t a lot of women in the sport when I did it and it’s not intimidating, they just made you better. I think the more competition you have in life, the better you’re gonna be because it makes you better,” she said on the Cowboys of the Osage podcast. “I think you need to have God in your life. I know I was blessed. God blessed me with a lot of good horses, good family, kept me healthy … for not getting hurt worse than I was. I know he looked out over me and over my horses. I just give all the glory to God.”

For more information on the INFR, visit www.INFR.org