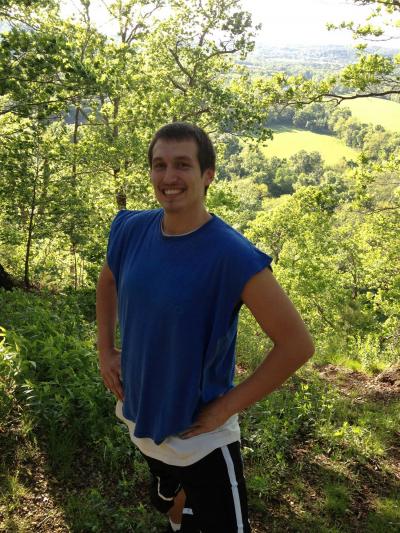 James Cosby’s life has not always been easy, but hard work pays off.

In April, he received the Public Relations Academic Achievement Award from Northeastern State University in Tahlequah.

“I started getting excited when I heard I was nominated,” Cosby said. “When I got the award I felt pride and it made me feel great that my hard work was paying off.”

Cosby, Osage and 23 years old, is a senior at NSU and plans to graduate in December. He is majoring in Mass Communications with an emphasis on Public Relations.

He was born and has lived most of his life in Pawhuska. His parents are Charlene and Mike Cosby. He has three sisters Anna Trumbly, Deanna Lambert and Dena Rackliff.

Cosby graduated from Wynona High School in 2008, a small town south of Pawhuska. Upon completing high school, Cosby decided he wanted to go to college because he saw a problem with communication among the Osage people.

“I saw a communication problem in every aspect from speaking to our children to encouraging our friends and family,” Cosby said. “I want to teach Native youth how to communicate more effectively.”

Cosby received a full-ride scholarship to Sterling College in Sterling, Kans., but decided to go to NSU and tried out for the basketball team.

He made the NSU basketball team and was red shirted his freshman year. At the beginning of his sophomore year he fractured his ankle, putting him out for the season. His junior year he decided to focus on school and didn’t try out for the basketball team.

In 2011, he had a summer internship in Pawhuska with Buffalo Nickel Creative, a Native American-owned advertising agency. Ryan Red Corn, principal and co-founder, had Cosby read books relating to his major, produce vlogs (video blogs) and help with various events like the National Congress of American Indians (NCAI) conference they attended in Santa Fe.

“He is a very youthful person and good with kids,” Red Corn said. “He showed a lot of potential during his internship.”

Little did Cosby know that his internship with Buffalo Nickel Creative would later win him the Public Relations Academic Achievement Award.

Dana Eversole, a Mass Communications professor at NSU and internship coordinator nominated Cosby for the award.

“I nominated him because of his outstanding internship he did with Buffalo Nickel Creative,” Eversole said. “I was just impressed and I’ve always liked James, he’s been one of my favorite students.”

Eversole adds that Cosby competed against 25 other students for the award.

“I think it was James’ time to be awarded for his work,” Eversole said. “He’s done a really good job and I think he will be an asset to his tribe.”

During his time at NSU Cosby has been a contributing writer for The Northeastern for four years and has written over 40 articles. The Northeastern is a student-run newspaper with a weekly circulation of 2,500 newspapers distributed throughout all three NSU campuses and the Tahlequah community.

He is also a member of the NSU Native American Student Association, a peer educator for the HIV/AIDS Coalition and was the President of Phi Sigma Fraternity, a Native American fraternity.

“I joined all the organizations on campus mostly to help improve the rate of Native graduates,” Cosby said.

Cosby is interning this summer with the Osage Nation’s Human Resources Department. Cosby said he will be doing the advertisements and marketing for the “WahZhaZhe: An Osage Ballet,” that will be held in August. He is also helping with audits and designing business cards for the department.

“I see the Lord working in James’ life daily,” Trumbly said. “He has been working hard for four years and I am so very proud of him.”

When Cosby graduates in the fall with his bachelor’s degree, Trumbly said his degree will be more than just a piece of paper- it will be a ticket to a new world.

Osage News Staffhttps://osagenews.org
As an independent news organization, we strive to report news and information with fairness and balance. While being the official news organization of the Osage Nation, we base our news judgements on our loyalties to our readers and Osage citizens, and we are not directly beholden to the Executive, Legislative, or Judicial branches of the Osage Nation.
RELATED ARTICLES
Community

Fifty-two students promoted to next grade level at Daposka Ahnkodapi

NAJA denounces White House’s use of Pocahontas as slur